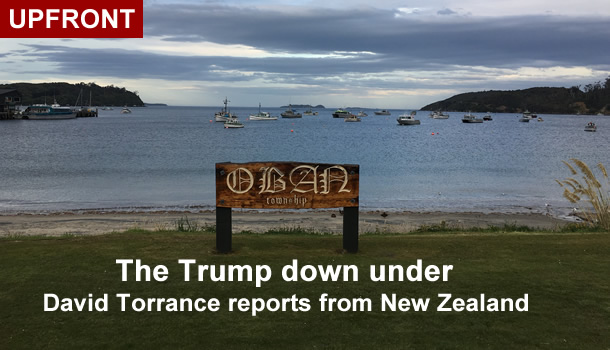 In Oban there's a little hillside cemetery overlooking the atmospherically-named Halfmoon Bay. There are only a few dozen gravestones, many of them bearing the same family name, but some of the inscriptions caught my eye. One commemorates Archibald Neil Campbell, 'son of Thomas Campbell of Edinburgh', who died in 1903 aged 68.

Stressing a second-generation connection to the Scottish capital might seem odd if that headstone was in Oban on the Argyllshire coast, but it’s actually in the 'township' of Oban on Stewart Island, New Zealand's third-largest 'island' 30km to the south of the South Island, across the turbulent Foveaux Strait.

Oban’s few streets all bear the imprints of homesick Scottish settlers: Elgin Terrace and Ayr, Dundee and Argyle Streets form a box around the South Sea Hotel, the focal point for the island's few hundred permanent residents and those passing through, mainly outdoorsy types. Friends mocked me for seeing a similarity between the two Obans (Scots Gaelic for the 'little bay'), but a lady I met at the local Presbyterian church agreed – she'd visited the Scottish Oban a few years ago.

Originally settled by Shetlanders and Orcadians, Stewart Island has the delightfully detached air I've encountered in the Western and Northern Isles, but then of all the old British 'dominions', New Zealand is the one that feels (to me) closest to home, by which I mean Britain or the UK. Many Kiwis spend a year or two in London or other British cities, a sort of post-imperial pilgrimage to the motherland, while the streets of Wellington are full of Scots and English accents.

Home to New Zealand's parliament, Wellington’s political community is small and relatively accessible – not unlike that in Edinburgh – and most of the politicos I met were fascinated by events in the (formerly) imperial capital, not least Brexit and the prospect of another independence referendum, the ins and outs of which were covered daily in several city-based broadsheets.

Last month Bill English, the relatively new prime minister, was in London talking to Theresa May about a post-Brexit trade deal, which struck me as ironic. When the UK first joined the European Economic Community back in 1973 there was much anger in New Zealand as its agricultural markets were abandoned in favour of those on the continent. Now Mrs May is reduced to asking Mr English to buy British in the hope his former dominion can help the UK’s transition out of the European Union.

Indeed, compared with what’s going on elsewhere in the world, New Zealand seems an oasis of boring stability – the only referendum here was on changing the country's flag. Not only is the economy relatively strong, but internal conflict – chiefly between the Pākehā and Māori communities – is now largely absent. I watched Bill English make this point in parliament as he framed the election he’d recently announced for later this year, his commitment to 'stable government' giving New Zealand 'so much of an advantage in a world of so much uncertainty'.

Like Scots and Canadians, Kiwis define themselves in terms of a larger neighbour with whom they share a common language and history. Across the Tasman, it seems, Aussies are crude and racist, while Kiwis are smart and tolerant. Of course there’s mythology in all of this, but the contrast is repeatedly made. When news broke of President Trump hanging up on the Australian premier Malcolm Turnbull it was covered in New Zealand with mild satisfaction, as was Bill English's call the following week, which passed off without incident. In parliament, the prime minister contrasted the 40,000 people leaving for Australia four years ago with the present 'slight inflow'. That, he told MPs, was 'one very good measure of how New Zealanders see their own country'.

But the average New Zealander's perception of themselves as ultra-tolerant occasionally clashes with reality. Last weekend a Wellington-based friend shared a Facebook post from a Muslim lady of his acquaintance, who had been verbally and physically abused by a white New Zealander questioning her right to be in the country. Naturally it played big in the media and the abuser was later arrested. The exception that proves the rule? Perhaps, but my Kiwi friends weren't altogether surprised.

The nation's perceived stability is also relative. Kiwis can feel the headwinds, not just of President Trump but his likely attitude to the Trans-Pacific Partnership (TPP) negotiated between 12 Pacific-rim countries including New Zealand, Australia and the United States. Due to come into force later this year, its future is now uncertain. Will Trump refuse to ratify the deal? As a remote, relatively small nation, New Zealand is acutely aware of its vulnerability.

On the opening day of parliament, the proto-Trump leader of New Zealand First, Winston Peters (of Scottish and Māori descent), mocked the governing National Party – 'a globalist party' – for its belief in TPP and support for what he called 'mass immigration'. Peters repeatedly invoked Trump and Brexit in the same breath as his predicted victory in September’s election. 'I know things are difficult and troubled and I know it has been very hard for you', he said, addressing normal Kiwis, 'but hang on, because help is on its way'.

It was the usual rallying cry of populists the world over: things are bad, very bad, but don't worry, there exist easy solutions to difficult problems, just have faith. Winston Peters (who pre-dates Trump by some decades) has been kingmaker before and may be again, but mainstream Kiwi politicians are inclined not to take him seriously, regarding him more as a court jester than a serious political threat. That, I couldn't help feeling from my berth in the visitors' gallery, is not a sensible approach.

In a second despatch, David Torrance reports from Australia in Thursday's edition of SR

The Daily Sketch
Scotland the inert