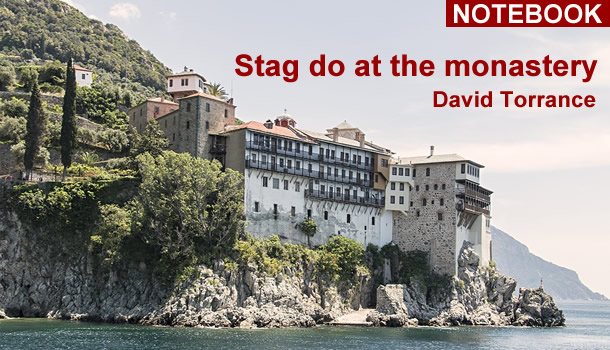 I'd forgotten how atmospheric Istanbul was, a sprawling city that lends itself to melancholy. I was last there in 2004, years before attempted coups, authoritarian presidents and European referendums fuelled by hyperbolic fears about millions of Turks moving to the UK. In fact, back then it was assumed that Turkey, having removed the death penalty and reached an uneasy peace with its Kurdish population, would soon be joining the European club.

All that seems far away now. Last Wednesday I had lunch with an old friend at a large university in Istanbul (not, as the song going through my head had it, Constantinople), and while all he wanted to talk about was Brexit and the ongoing general election, I was curious to know about recent developments in Turkey. My grumblings about Mrs May, Ms Sturgeon et al seemed rather inconsequential as he filled me in about the extent of his president's ambitions, not only an extensive purge (it seems odd to use such a word in the 21st century) of professionals, but perhaps the re-introduction of the death penalty.

Depriving political opponents of their careers, it seems, isn't considered enough. Back home some commentators compared Mrs May's snap election with Erdoğan's recent referendum on abolishing the Turkish parliament, but the implication is as offensive as it is reductive. Sure, the prime minister's calculation is cynical, but it was endorsed by the House of Commons and the election itself will be free, fair and uncontested, none of which applies to the Turkish referendum.

I hadn't quite appreciated, meanwhile, the impact of recent events on the city's economy. When I first visited 13 years ago I remember vast crowds and humungous queues for all the main attractions, but this time it remained busy – it's home to 15 million people – just not with tourists. I had many museums and (former) churches literally to myself, and my hotel, a stone's throw from the always impressive Hagia Sofia, was empty but for me. Not only is Wikipedia banned, but so is the popular gay dating app Grindr, which the authorities apparently consider some sort of security threat. At sunset, outside the Blue Mosque, a visitor from Ankara tried to pick me up. I politely declined, wondering if this is what it was like in pre-1967 London.

From Istanbul I flew to Greece's second-largest city, Thessaloniki, where I rested for a few hours before catching a bus and ferry boat to Mount Athos, literally the 'holy' (or 'sacred') mountain, an autonomous part of Greece where freedom of movement doesn't apply. Far from being motivated by some Brexit-like fear of immigration, this is to maintain a centuries-old ban on female visitors, something insisted upon by the 20 orthodox monasteries that constitute the region. Even the animals are all male, except for the cats that roam the peninsula. They're tolerated on account of their rodent-catching ability.

I was there as a 'non-orthodox pilgrim', permitted to stay for just three nights at three different monasteries. This had required pretty extensive pre-planning, and it was so far advanced by the time the election was called that cancelling or postponing the trip wasn't an option. The 'guest master' at my first monastic berth, Xenophontos, inquired what I did in the UK, and he looked quietly appalled when I said I was a political commentator. 'There's no politics here,' he said reproachfully. 'That's fine,' I replied, 'I need a break from politics, there's too much of it about at the moment.' On hearing this, he looked relieved.

Yet still, courtesy of a patchy 3G signal on my phone, I was able to keep abreast of developments on the campaign trail, although at no point did I feel I was missing very much. Otherwise my daily routine was dictated by vespers and meal times. The former took place at around 6pm each day, worshippers summoned by a monk beating a plank of wood. The ceremony itself was long, and generally lost on a non-believer like myself, but the food, basic and vegetarian, was good, although we were allowed only 20 minutes to consume it in strict silence, about the same amount of time it took one of the monks to read aloud the life of a saint. In the morning, meanwhile, hard-core pilgrims were expected to pray for three hours starting at 4am, a prospect I wrote off almost as soon as I arrived. With breakfast, however, there was some locally-produced wine, which seemed rather decadent.

By the Sunday, however, I was ready to leave. Not only did I feel rather self-conscious as the only non-orthodox guest, but the middle-aged Greek men who pervaded treated the whole experience rather like an extended stag do. Inexplicably, they were decked out in sports gear, checked their mobile phones during vespers and, at night, feasted and drank as if in Athens or Barcelona. This was jolly enough – on learning I was from Scotland they cracked open a bottle of Famous Grouse – but not exactly what I'd had in mind while planning my 'pilgrimage'.

Thessaloniki, to which I returned via three buses and another ferry boat, was a welcome antidote of urban normality. I arrived just as news of new fiscal measures agreed by the Greek government emerged, chiefly €4.7 billion in pension and tax allowance cuts by 2021, and this from a Syriza administration that promised to 'end austerity'. I read about this as the UK Labour party's manifesto was (obviously deliberately) 'leaked' to the press, for it contained the same sort of fantasy economics. The SNP makes similar claims about independence removing the need for austerity on home turf, which is all well and good in the heat of an election battle but almost certainly undeliverable – as Syriza has learned – when faced with the responsibility of office.

Salonika, as it's also known, was charming, and for two days I revelled in the joys of exploring a new city. The splendidly-named 'Museum of the Macedonian Struggle' also introduced me to the complex backstory of modern Greek nationalism, something I digested as Ruth Davidson prepared to deliver a speech in London about the difference between 'patriotism' (good) and 'nationalism' (bad) in a Scottish context. The past century is replete with this Orwell-inspired, but essentially spurious, distinction. Just look at Theresa May, now claiming to 'stand up for Britain' while dismissing Nicola Sturgeon's claim to 'stand up for Scotland' as 'narrow'. Our nationalism, naturally, is always better than theirs.