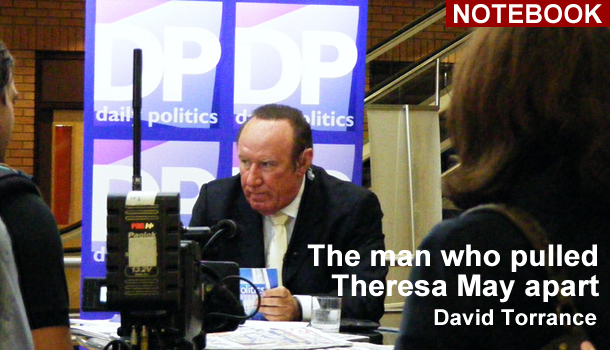 The launch of the Conservative party manifesto last week gave rise to much commentary about 'Mayism', whether it existed and, assuming it did, what it meant. This is something that can legitimately be blamed on the late Mrs Thatcher, for this desire to personalise political ideologies seems to date from the early 1980s; in none of my political reading have I encountered references to Callaghanism, Wilsonism or even Attleeism.

Several Tory watchers decided Mayism didn't mean very much, with the manifesto simply confirming the prime minister's post-ideological approach, a bit of Milibandism here and some re-heated Thatcherism there. Most striking was its centrist pitch and clear pursuit of both old Labour voters and the disenfranchised (formerly) UKIP vote. In this, Mrs May is actually continuing a grand old Tory tradition of positioning her party where she judges 'mainstream' British opinion to rest. Stanley Baldwin did it in the 1920s (appealing to former Liberals), Harold Macmillan in the 1950s (when he co-opted aspects of Attleeism) and even Margaret Thatcher in the 1980s (remember council house sales?).

Historians characterise this as the Conservatives' 'appetite for power', a pragmatic – one might say opportunistic – approach that's made it the most successful party of government over the last century or so. Is it coherent or credible? Well, voters seem to think so, as does the Scottish National Party, which has pursued a similar strategy over the last decade, what Blairites used to call 'whatever works'.

On Friday morning, I watched the prime minister help launch the Scottish Tory manifesto at the Edinburgh International Conference Centre with a studiously (and deliberately) anodyne speech which only managed to utter the phrase 'strong and stable' once. Ruth Davidson, meanwhile, continued her audacious pitch for Scottish Labour voters, proof that even in Scotland that 'appetite for power', or rather electoral recovery, is stronger than it's been in 20 years.

On Saturday I attended a friend's wedding at the splendid St John's episcopal church in Edinburgh's west end, and afterwards mingled with other guests – many of them active in the Scottish Conservative party – at that curious bastion of the Scottish establishment, the New Club. Several activists told me that canvass returns in the SNP-held constituency of Moray looked very promising (Ms Davidson has spoken of unseating Angus Robertson). Later that day I got a text from a Nationalist contact who told me SNP fieldwork in the same area looked 'solid'. As ever in elections, it's a case of whose spin you choose to believe.

Pundits, meanwhile, love to maintain the fiction that voters in places like Moray are following the general election in the same way political obsessives do, i.e. raking over party manifestos and watching the obligatory leaders' debates. In truth, most voters make up their minds based on instinct, mood and a general impression (favourable or otherwise) of candidates, leaders and parties. Very little from the campaign cuts through. A recent poll, for example, found that only around 15% of those surveyed recognised the phrase 'strong and stable'. Frankly, I was surprised it was that high.

But the leaders' debates give people like me something to do, and so on Sunday evening I joined dozens of other hacks in a cramped, windowless basement at Drummond Community High School (which, as it happens, was my mum's alma mater) to watch proceedings in the nearby Mansfield Traquair Centre. Most of the exchanges hinged on an increasingly antagonistic relationship between Nicola Sturgeon (clad in Tory blue) and Ruth Davidson (clad in Labour red), which underlined that the dominant dynamic in Scottish politics is now SNP versus Conservative, for the first time in modern political history.

Scottish Labour leader Kezia Dugdale, by common consent, performed well in the debate, as she did at her own manifesto launch the following morning, but then it won't make any difference to anyone but the already converted. Labour's tragedy, it struck me, is that despite having an effective leader (in Scotland at least), coherent agenda and a refreshing focus on policies rather than flags, a few years ago they lost permission to be heard. They now find themselves where the Scottish Tories were after 1997: unloved, increasingly ignored and, therefore, irrelevant.

Sunday's debate, meanwhile, only became interesting when, in the second half, a nurse called Claire Austin challenged the first minister over her pay, conditions and prospects in the NHS. This brought to mind teacher Diana Gould, who famously challenged Mrs Thatcher over the sinking of the Belgrano during the 1983 general election, a reminder that no matter how disciplined and dreary a campaign, they're subject to what Harold Macmillan famously referred to as 'events, dear boy, events'.

It can be catching. No sooner had the hitherto Teflon Nicola Sturgeon been humbled by a nurse (a bad story made even worse by her party's subsequent response), but the following day Mrs May undermined her 'grown up' pitch by performing a handbrake turn on a social care policy announced just days previously. Proving his worth as an interviewer, the BBC's Andrew Neil then pulled the prime minister apart in an excruciating televised interview. Strong and stable? More like weak and panicky.

And those events can also be tragic. On Monday I made plans to attend to the SNP's manifesto launch on Tuesday morning and the second leaders' debate in Glasgow the following evening. The terrorist attack in Manchester, of course, overtook all those dates on the Scottish political calendar and, as I write, all campaigning has been suspended. The dozens of dead and injured in that fine northern English city puts everything in context, not least the incessant claim and counterclaim of a general election campaign.