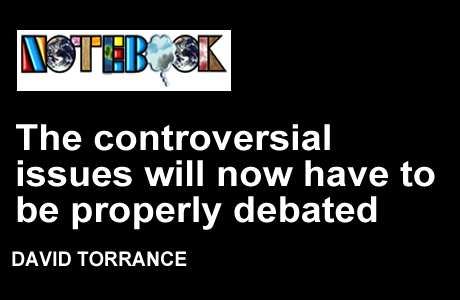 Last Thursday I transferred myself and rather too many bags from London to Edinburgh on the 12 noon train from King’s Cross, having decided the week before to relocate to the city of my birth. Although I love London, and particularly Hackney, shuttling up and down sometimes twice in one week has been depleting both my energy reserves and bank balance. As a freelancer with a laptop I don’t need to be based anywhere in particular, but Edinburgh’s obviously where the Scottish political action is for the foreseeable future.

Because I had so much stuff I caught an Uber between Clapton and the railway station, and took the opportunity to interrogate my driver about how the service worked. In my experience most Uber drivers, certainly in London, are usually immigrants from the Middle East or the Indian sub-continent, but on this occasion it was a lady in her mid-40s with a distinctive South London accent. She told me that until a few years ago she’d been a stay-at-home mum, but once her kids got to school age she’d started Ubering most days, something she’d found 'liberating’.

Uber is popular both through convenience (cars can be summoned via an iPhone app) and cost (they’re generally much cheaper than regular black cabs), but of course that means drivers don’t earn as much, not least because Uber takes a 20% cut. Still, my driver considered this a reasonable arrangement and had few complaints: she was earning much-needed cash and could drive as much or as little as she desired.

As we approached King’s Cross (now splendidly upgraded), and having run out of questions about her employment, I asked after her parents. 'Oh my dad was born in Aberdeen,' she replied, again in a heavy South London accent, 'and my mum’s originally from Glasgow'.

Shortly before catching the train I had voted in the London mayoral and assembly elections in Clapton, which forms part of Hackney. The campaign had been rather low-key but as the choice was essentially between the Conservative Zac Goldsmith and Labour candidate Sadiq Khan, my pencil didn’t hover for long over the ballot paper. There were also two separate votes for the constituency and regional list elements of the Greater London Assembly, which uses an electoral system similar to that for the Scottish Parliament.

That race – part of a remarkable array of elections taking place that day – was reasonably predictable, for opinion polls had given Mr Khan a clear and consistent lead, and en route to Waverley I assumed the same would be true of the battle for Holyrood. That said, speaking to a London-based BBC producer that afternoon, I did flag up what I called the 'outside chance’ that the incumbent SNP wouldn’t get another overall majority, and so it proved.

This first became more of a possibility when some unexpected constituency results started filtering through in the wee small hours of the following morning. I was at BBC Scotland’s 'election café’ at Pacific Quay in Glasgow, and a contact who used to work for Alex Salmond sidled up to me to say that he was now doubtful the 2011 result would be repeated, as I and most others had assumed it would be. His intuition was correct, although that wasn’t confirmed until several hours later.

As both a citizen and a journalist I reckon this is no bad thing: regarding the former, the dynamic created by a minority government is much better than that inevitably forged by a majority one, what the late Lord Hailsham called (in reference to the House of Commons) an 'elected dictatorship’. The 2007-11 Holyrood term, for example, was much more ecumenical and lacking in tribalism than that which followed. And as a journalist it simply means politics over the next few years will be more interesting: controversial issues will have to be properly debated instead of railroaded through parliament.

Hanging around the Scottish Parliament on Monday morning my impression was strengthened by the atmosphere, a combination of 'first-day-at-school’ anxiety and genuine surprise at an unexpected turn of events. I based myself in the splendid Garden Lobby at Holyrood (it works better with sunlight) mainly to meet some of the new intake, the majority of whom were Scottish Conservatives – not a sentence I imagined I’d write a few days earlier.

I’m now at an age where old university contemporaries and other friends are getting themselves elected to various parliaments, so it was also good fun. The new Liberal Democrat MSP in Edinburgh Western (Alex Cole-Hamilton), for example, was at Aberdeen University at around the same time I was, and his 'inductor’ that day was Rob Littlejohn, a mutual friend who edited the student newspaper (The Gaudie) and now works in the Scottish Parliament. I also caught up with Andy Wightman from the Scottish Greens, Adam Tomkins from the (understandably upbeat) Scottish Conservatives and Daniel Johnson of Scottish Labour. All very ecumenical.

For what it’s worth, I think it was only the atmosphere that day – a combination of the variety produced by the 2003 election and the minority administration that followed in 2007 – that brought home to the SNP how the dynamic had shifted. The incumbent party did well: its constituency vote increased and it won almost as many MSPs as in 2011, but the difference between majority and minority is nevertheless significant; Holyrood has reverted back to its intended dynamic, and it could be that history looks back on the 2007-11 parliament as the exception that proves the rule.