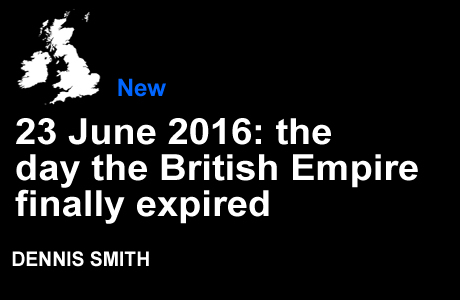 Some empires go out with a bang, overthrown by rivals. Some go with a whimper, dwindling into inanity. Others undergo weird transformations: the Russian Empire was formally abolished by the 1917 revolution but imperialist thought patterns continued to underlie Soviet policy (and still linger on in the mind of Vladimir Putin).

Future historians, looking back, may nominate 23 June 2016 as the day when the British Empire finally expired. They may also see it as the date when the English finally began the task of constructing for themselves a genuine democratic identity. Whatever route they choose, their journey is likely to be long and arduous.

In the long term, imperialism and democracy are incompatible: the rise of nation-states means the fall of empires. English expansion began nearly a thousand years ago with the Anglo-Norman invasion of Ireland, climaxed, and then fell back in the face of growing demands for democratic self-determination. Charged with holding this difficult balance, Westminster retained an essentially imperial role. This is why it has proved so hard to reform: imperial mystique must not be weakened by democratic transparency.

In 1953, at the age of eight, I witnessed the coronation of Queen Elizabeth (I or II according to taste). My most vivid memory rewinds an apparently endless procession of military units in exotic uniforms representing every tiny part of the Empire and Commonwealth – the last manifestation, as things turned out, of Britain’s imperial grandeur. There was talk of a new Elizabethan age, with a reincarnated Good Queen Bess reigning over a reinvigorated empire. Three years later, at Suez, the edifice came crashing to the ground.

But this was never openly acknowledged. In many eyes the Commonwealth constituted a new, more democratic and still powerful continuation of the Empire. My staunchly-Conservative family were outraged when Dean Acheson pronounced in 1962 that 'Great Britain has lost an Empire and has not yet found a role'. For them the Empire lived on, an item of faith that transcended empirical realities.

The Queen’s role as head of the Commonwealth was important here and had unfortunate consequences. It disguised the UK’s changed status, particularly after it eventually joined the EEC, and inhibited parliamentary reform. The pre-modern and pre-democratic nature of Westminster practices was celebrated rather than confronted – think of Carnaby Street and Tony Blair’s 'Cool Britannia'.

This is especially true of England. While Scotland has made some progress in reconceiving itself as a democratic polity, England remains trapped between empire and democracy, Britishness and Englishness. What other ancient European nation lacks its own national parliament? What other nation has such a confusing and contradictory mess of 'national’ institutions?

Some institutions, like the Imperial War Museum, remain unrepentantly imperial. Some, like the BBC and the British Museum, assert a Britain- or UK-wide role. A few, like the Arts Council of England, proclaim themselves as English (though, typically, the ACE exercises some UK-wide responsibilities). But many operate under the shifty name of 'national’. Since Scotland has its own Scottish National Gallery and Scottish National Portrait Gallery, one might expect their London equivalents to represent England. But in practice their role is ambivalent and undefined. When the English look for a mirror to reflect their identity it is no surprise that they find only cloudy distortions.

How many nations are there in the UK? Unlike the question: 'How many angels can dance on the head of a pin?’. This question really matters in a world where – at least for the moment – democratic nation-states form the building-blocks of the international order.

Far from improving matters, devolution has in some ways made things worse. There have been real gains for Scotland, Wales and Northern Ireland, but the UK as a whole has arguably become less democratic. Lines of accountability have been blurred, new inequalities have appeared and voters (particularly in England) have felt alienated and disempowered.

If we take liberty, equality and fraternity as our guiding principles, then equality of voice within agreed political boundaries lies at the heart of democracy. Asymmetric devolution as practised in the UK goes in precisely the opposition direction: it creates a variety of jurisdictions with unequal rights, powers and responsibilities. The new UK constitutional settlement resembles nothing so much as the ‘parcellised sovereignties’ of ancien régime France. To any egalitarian, asymmetry should appear as an abomination.

The world would be a better place if England in the 1960s and 1970s had shaken off its imperial delusions and constituted itself as an ordinary democratic nation among nations. But the attractions of 'great power status’ and 'punching above our weight’ were always too strong.

So we find ourselves where we are. In many respects England now faces the same challenges of democratic nation-building as Scotland, though the English may have more ghosts to exorcise. But it seems likely that we must face them separately. The task of creating a unified British demos now looks beyond the skill of man (or woman).