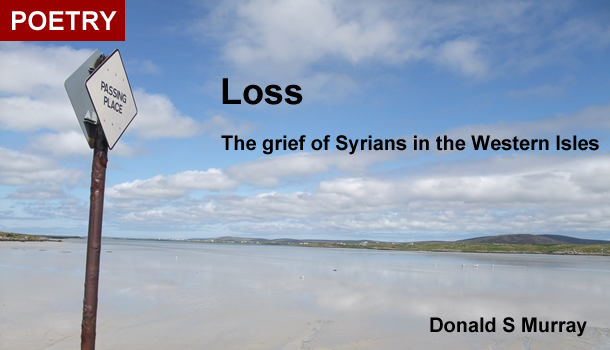 Ten days before Christmas the first Syrian families to resettle in the Outer Hebrides were informed that close relatives had been killed in intense bombing attacks in Aleppo. The convenor of Western Isles Council, Norman Macdonald, described the tragedy as a 'heavy blow' for the Syrians who had recently arrived in Lewis.

One man lost his daughter and three of his grandchildren. It is to this bereaved father and grandfather that Donald S Murray refers in the following poem.

The salt he finds soaking his cheeks
has not been carried on the wind today,
for all it’s cold December and storms blow fierce
and frequent through the streets of Stornoway,
for all that he’s in exile from citadel and souq,
Bab al-Hamid and all the ancient city gates.

These losses rarely trouble him. It has been his fate
to wander this vast distance; to more often hear
Gaelic these days than Arabic; to shiver in this dampness;
to every evening taste the smear
of salt upon his lips; to yearn sometimes
for the call to prayer to echo round his ears.

No. Not today. Instead he feels within his arms
a vacancy of children; the weight of these five ghosts
he used to hold and embrace; the five souls,
four of whom he’s lost.

Loss: the grief of Syrians in the
Western Isles
DONALD S MURRAY

Scotland must be realistic
about immigration
CAFE