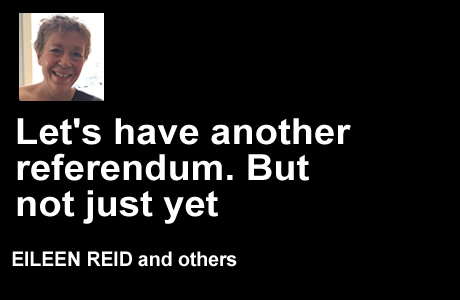 I knew it. When Newcastle declared around midnight a feeling of dread descended and never lifted until I fell asleep at 2am. Still, lying in a bed in a hotel room in Oxford on 24 June at 9am is where and when I heard the political shock of a lifetime. Yes, it's serious enough to warrant the 'where were you when you heard...'.

The vote to leave the EU is a catastrophic political, social and economic error, the reasons why it is a catastrophe all people of common sense know already, so no point dwelling on them. I am staying in Lewisham, London for the next while, the only place I feel at home outside of Glasgow. Lewisham voted overwhelmingly Remain, one of the highest in the country and much higher than any area in Scotland. Given the chat of another independence referendum, I think I'll stay for a while. It's inevitable that the result of the EU referendum will trigger a second Scottish referendum, which I and many others will support fully. It's the glee of Yessers I cannot stand. So, please God, make me another referendum, but not just yet.

Like most of my fellow Scots. I am shocked and numbed by the result. My daughter emailed me from Puglia in Southern Italy where she is on holiday with her partner and two friends to say roughly the same. She had seen Farage’s 'victory’ speech and his triumphalism at the same time as Marine le Pen, France’s ultra-right politician, was quoted as being 'ecstatic' at the outcome. And I’ve just heard that Donald Trump thinks it’s great that the UK has taken this decision.

It seems that the older the voter, the likelier they were to vote Leave, while 75% of 18-25 year olds voted Remain. And these are the people – not me and my generation – who will have to live with the consequences of this awful result.

I never thought I would say this, but I will. The fact that Scotland voted so differently from England poses a personal dilemma, as a No voter two years ago. Now I believe that if there were to be a second referendum in a couple of years – provided the proposition was linked to an application to join the EU – I would vote yes.

Oh shit! The world as we knew it, as we hoped it might be, is gone. We need to move at speed. Grief is the thing with feathers on. None of us have known anything of this scale, ever. We need to be aware that neither the rest of Europe nor the rest of the world will move slowly, they will move apace, adapting to what seems best to them.

It does not now matter what we hoped for. Whether we thought this was the best result or not. The result is in. We must make it the best result. Watchfully we must walk in the new world. Above all speed requires calm. There is and will be much to respond to. There are no points to be scored from arguments before 10pm on 23 June. The votes are in. The future fixed.

It is a moment for leadership. For each of us. No Moses attends to describe this new world. It is entirely unknown. However we got here, here we stand. Uncertain, fearful, some hopeful, all changed.

In Scotland sharp focus will be on Sturgeon and the case for a second referendum on independence. Whatever happens on that, it will happen in a global context. Our relationships with the world will now change for ever. In whatever form Scotland will need always to maintain close and well-working constitutional, economic and social relations with all neighbours. Let us not rush to anything.

There is much to disentangle, and disentangle we now must. There was great value in our membership of the EU. Much of detailed value. Much that, in whatever ways, should be carried forward – rights, relationships, and economic exchanges.

The rest of the world will also change, in shock. Across Europe and beyond. Britain has chosen and each other country will take time to understand a new UK. So must we. We now know who we are not. We do not yet know who we are.

And so, and in no rush, we must thoughtfully build who we want to be. My intuition, and I am deeply Scottish, is not be distracted by arguments for independence, whatever that means. Our interdependence is abundantly clear. I regret this decision to leave the EU, I think it foolish. It is made.

The question now is how to make ourselves. How in this new world to be the best, interdependent, us.

God – what a terrible decision. I have been doing my best on Facebook, through the Labour Party and even when lecturing on air pollution in London recently to explain the EU is not just about sending aliens to England, but the lunatics have really taken control of the madhouse now. The poor and the weakest in society have been sold a miracle cure by the quacks and have swallowed poison. It seems to me that populism and demagoguery have won the day; they now will have the huge problem of saving the UK economy, but our reputation in the world has sunk to its lowest ever.