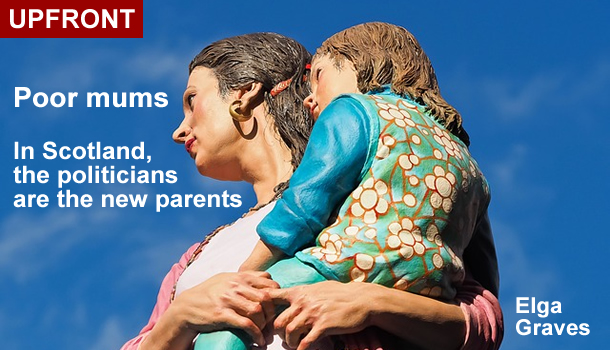 The provision of one additional year of state-funded educational provision for 24-month-old infants from poor homes is a totemic SNP policy. The government's justification for this educational policy is that it will lay down the bedrock for the national effort to close the gap in educational attainment and lifelong economic prospects between children from poor homes and those from more privileged backgrounds. The government will be signalled as progressive, inclusive, virtuous, and child-friendly.

The evidence cited by the government to articulate the need for this policy is impressive. Evidence derived directly from infants shows that children of employed graduate parents at 36 months have some 3,000 words whereas children from deprived backgrounds have as few as 300; the latter are two years behind. It is important to recognise that what is at issue here is not the one-upmanship of Gradgrind's fabled horse, but the practised use of all the little pronouns, adverbs and prepositions which allow us to create context to express our thoughts about space, time and probability.

The holy grail of pedagogic effort at this stage in the child's educational development is to produce a child adequately equipped to embark on the adventure of fruitful hypothesis about himself, his school subjects, the world and his place in it. Good teaching both harnesses and retains the child's age-related sense of playfulness. Decent relations between the home and school ensure that the horizons of parental expectations on behalf of their child are met. These are the essential ingredients, with few local variations, of any successful school system.

So, what could be more reasonable than to find funds and nursery places for an additional year for children from the least socially advantaged, educationally poor and possibly least healthy homes and begin the task of closing the attainment gap? At first glance, it would appear to be an enlightened and humane policy: educational provision provided on the basis of need.

What is wrong is the message it sends to already disempowered women, many of whom are at grave risk of giving up on their identity and confidence in themselves as the rock on which their infants' experience of childhood rests. The suggestion that they hand over early parenting to the school, to professionals, and ultimately to the state, may well undermine what confidence they have in their own parenting skills.

The socially assured, professionally qualified mother does not occupy the same universe as her poorer counterpart. The yummy mummy of Bearsden or Morningside enjoys the luxury of making real choices in respect of her child-bearing status. She may choose to have no children. She may elect, with little penalty to her earning potential and increasingly little interruption to her career-building, to take a career break. If, after carrying and delivering her child, she entertains doubts about her own parenting skills she may afford hired help, access medical services with social assurance to diagnose some of the bewildering range of newly discovered children's 'conditions' or, alternatively, she may buy a great many spa weekends.

The poorer mother, on the other hand, enjoys few options. Childbearing may well represent the 'Camelot' moment of her life. This is the woman who bears the brunt of Scotland's dreary statistics of domestic violence, divorce, deserting partners or even the indignity of state involvement in their sex lives via social security assessment. Her economic prospects were written on the wall for her by the failure of the Scottish school system which, according to Professor Lindsay Paterson, has failed to impact on inequality and social mobility in Scotland since the late 60s.

In 1986 I persuaded the agency which preceded Scottish Enterprise to invite an American educator to Scotland to evaluate whether the state-wide programme with which she had much success in Missouri could bear cultural transference to Scotland and, more particularly, to the families of the eight square miles of northern Glasgow.

Mildred Winter, now a distinguished world-class educator as well as being a very old and venerable lady, visited Glasgow in 1987. She has been honoured with a Kennedy medal for her achievement in starting and developing the Parents as Teachers (PAT) programme. Starting as a nursery teacher she developed a home-visiting programme of adult volunteers who visited homes from late-pregnancy onward to ensure that early learning/parenting skills were in place. She saw to it that the training of the volunteers was kept short and sharp. The only qualifications candidates needed to undertake home-visiting were demonstrable records of working well with children. Ms Winter single-handedly drove the programme through the legislature until it was mandatory in every school district in the state of Missouri, which has a population quite comparable to that of Scotland.

The system is based on the common-sense idea that expensive school contact hours can never compare with the 24-hours a day commitment that most parents demonstrate. Therefore the best method of supporting the parents as the main teachers of the child, while ensuring continuous engagement of the parent with the school process later, was to take the support into the home.

The system is now available in tens of US states and eight foreign countries. New Zealand, in particular, adopted the system wholesale. Mildred Winter found a valuable champion in the person of the state governor whose wife used the programme. Could we imagine any of the young mothers in our parliament anxious to get a place on a Scottish version of PAT for themselves and their infants?

Mildred Winter felt at that time that PAT was a cultural impossibility for Scotland. I thought then and think now that it is a political impossibility. The fact is that Scottish society at large appears to believe that education and early learning is something that can only be delivered from on high, from professional teachers down to the underperforming. Educators are reluctant to release their grip on the educational process, despite the truth that what is really at issue is the confidence and well-being of the mother.

But we don't need to look any further than the 'named person' proposal to see how little faith Scotland has in mothers. Of course, the policy of nursery provision for two-year-olds is not intended to be lacking in empathy. But its unintended consequences will be cruel in effect and unsuccessful in its aims. Above all, the government, having satisfied itself that it is doing something about the attainment gap, will have failed to provide support to the many parents who need some help in realising that they truly are the best possible teachers their child is ever going to have.

If Scotland were a lifeboat, the only certainty is that there would not be a sign saying 'women and children first'.