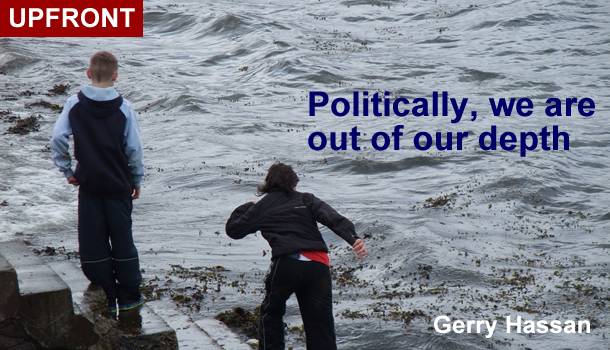 The past is a powerful force and that is even more true in the strange times we are living in.

Take the waves of reaction and revulsion emerging last week after Tony Blair came back from the cold to announce his new initiative on Brexit. Blair’s intervention took place at the start of the 20th anniversary of the first New Labour landslide, but also bizarrely after the Commons voted to trigger Article 50, and six days before two critical by-elections for Labour and Jeremy Corbyn. (The latter allowing the Labour leadership, if they lost one or both, to blame Blair and deflect blame from themselves.)

The Blair clarion call was that we should as a people rise up against Brexit and demand the right to think again. It met a mixed response. There are few people who openly admit to being supporters of Blair in Britain. Indeed, he seems to have fewer supporters in this country than even Trump and his pals Nigel Farage, Arron Banks and Piers Morgan. How the popular have fallen.

Brexiteers dismissed the Blair declaration. Some dismissed Blair the person. That’s not that difficult when he has a 14% favourability rating with the public making him even more unpopular than Corbyn who is on 24%. Anti-Brexit campaigners claimed that we shouldn’t shoot the message just because of the messenger, but it is never easy to make that distinction.

Everything about Blair’s speech felt odd. It reeked of a once formidable leader who has failed to understand how times have changed and their stock fallen. It evoked some of the fallen greats of the past such as de Gaulle and Thatcher, not realising that the seasons have changed and that the public are not still sitting waiting for them to return and save their nation at its time of need. There is tragedy and hubris in this, and a complete divorce from the realities of modern life and politics.

Yet, while there is only a shadow and ghost left in Blair, he still tells us some important things. First, he still has the echo of great communication and a good turn of phrase. It is just that it has no purchase and punch in the here and now. Second, it reminded us, if we needed, that once upon a time, he and his ism carried all before it in Britain and beyond these shores.

From when Blair was first elected Labour leader in 1994 and, even more, prime minister in 1997, Blairism as a political approach and set of ideas dominated British politics. This could be defined as a middle-ground politics of investing in public services, keeping taxation as low as possible, and advocating a liberal international order (morphying into the liberal intervention approach which led to Iraq).

Since Blair’s forced removal as prime minister in 2007 British politics has been shaped by Blairism without Blair under Brown, Cameron and Osborne, but without people wanting to openly acknowledge it. Ed Miliband and Jeremy Corbyn have aspired to break with this legacy, but the real rupture and end of the Blairite era has come with Brexit, as I suspect Blair knows. Hence, in many ways, his intervention and yearning for attention.

Blair’s moment in the sun brought forth all sorts of exchanges. David Torrance said: 'The irony is that the modern SNP – its spin, triangulation and whatever-works centrism – is thoroughly Blairite'. This brought SNPer Gordon Guthrie to claim: 'This is clearly nonsense – if the SNP triangulated it would have triangulated away from independence'. But beyond the independence issue the SNP has, in government, engaged in a politics influenced and shaped by Blairism.

This was in some places heated stuff motivated by whether you can label political forces or opponents with the worst insult imaginable – Blairite. Some of the people calling the SNP Blairite were the same ones who have also accused them of having similarities to UKIP. That seems like using any set of political insults against people you don’t like.

These exchanges made me ruminate on the continued influence of Blair. Once a positive, he has become a powerful negative force: a kind of anti-model and ultra-villain. Anger against Blair is for many unfinished business. It is still live and current. He is, many charge, responsible for all that is wrong in Britain today – and aided the election of the Tories, the destruction of Labour and the election of Corbyn and Brexit.

Much of the fire and rage is about the Iraq war. This ended 14 years ago and yet, despite the Hutton, Butler and Chilcot inquiries, for many the conflict and way Britain went to war isn’t over. It is almost as if British politics has been affected by a kind of post-Iraq war syndrome similar to how Vietnam syndrome hit the US. The main difference is that despite the controversial nature of the Vietnam war, the post-conflict syndrome began to dissipate a mere five years after the end of hostilities with the election of Ronald Reagan as US president in 1980.

Post-Iraq war syndrome understands UK military interventions through the lies and deceptions made by Blair and his acolytes taking the country to war in 2003. All subsequent cases are seen by the public and politicians through this: whether it is Libya in 2012 or the various Syria debates. This syndrome hangs over British politics as previously the perfidy of Suez and shame of Munich appeasement did. Eventually we have to move on from viewing all foreign policy and possible interventions via what happened in Iraq – as people eventually moved on from Suez and Munich.

Just as many cannot get past foaming at the mouth at the very mention of Blair, the same is true of Donald Trump. All sorts of over-the-top characterisations have been used to describe him: with Trump called for example, a fascist, nazi, white supremacist, and the spectre of the 1930s invoked.

Now I don’t want to diminish the dangers of the Trump presidency, but a much more recent and American example is available which offers insight into his manner and content of governing.

The Trump leadership ethos and style is reminiscent of Frank Sinatra and the Rat Pack at his peak in the 1950s and 60s. Both have an attitude of male entitlement, anger and inner (as well as outer) rage, a desire to hold back the years of feminism and women’s advancement, and a tendency to see America’s best years as round about 1953.

Then there is the sexism, racism and not believing that you are constrained by the same codes and constraints as ordinary folk. Instead, there is a belief that you don’t have to bother about shocking and offending others, and can basically say what you want, and hell, bugger the consequences. In Sinatra’s Rat Pack, 'the squares' just have to live with that, whereas with Trump, it is about pushing back against an arrogant liberal elite. Literally, both think that they have permission and the right to be as offensive as they want. They don’t have to follow the same rules as the little people.

The recent Mar-a-Lago Club weekend of Trump, the Japanese prime minister and the nuclear codes seemed something straight out of Sinatra’s 'Ocean’s Eleven' film set in Las Vegas in 1960. Even the name evoked the Rat Pack at their peak, as did the raucous swimming pool party. It has the implausibility of the story of a bad Sinatra Rat Pack film. Sadly though, all of this was real, not fiction.

Of course the above comparisons are harsh on Sinatra who, however much inexcusable, loutish behaviour he engaged in as leader of the Rat Pack and as an individual, had other redeeming qualities. He was a man of huge talent, the greatest interpretative singer of the 20th century, someone who stood up against racial discrimination when it was controversial and unfashionable, and championed black musicians throughout his life (while still being capable of the most offensive racist individual comments). And his Rat Pack did contain the talents of Dean Martin and Sammy Davis Junior.

Maybe with Trump this is history coming back to seek its own revenge. More likely, Trump and the Rat Pack analogy shows that he has given voice to a cohort of men who find modern life threatening and foreboding, and are looking to firmly put the clock back to an age when men like them could do what they like: cuss and swear, swagger, say unPC things, and not have to bother about what women or any non-white people thought about it.

There is something more at work. While the Trump Rat Pack analogy works to the extent that Trump is like some retro-drama with a nostalgia for a better yesterday where America was number one, envied the world over, and still made products that everyone wanted, it doesn’t do full honour to the horrors and sheer populist ignorance of his presidency.

But it is also self-evident that the fact that we are struggling to describe what Trump stands for and his politics, and the constant referencing and contesting of Blair and Blairism, illustrates how much we are out of our depth politically now. Politics, economics and modern capitalism face huge challenges, indeed unprecedented ones. The answers and terms of reference cannot be found in the 1930s or 80s, or even, closer to home, 1997 and the lost dreams of a 'New Britain'. We are in uncharted waters, and we maybe need to find a new political language and terms to describe the landscape and the future before us.

The Daily Sketch
With cartoon by Bob Smith