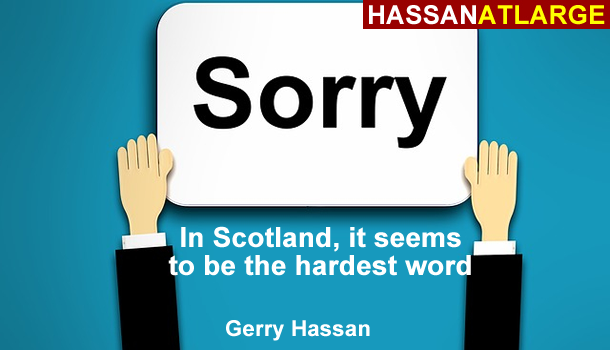 Power and privilege seldom like to have to openly reflect on their place in front of others.

Instead, power likes to present its position as a natural state of affairs – to just be, manifesting and imbuing a sense of its own importance. This is how power exerts and expresses itself, from the City of London to senior bankers and the forces of international capitalism.

The same is true of Scotland and in recent years this has been aided, in significant areas, by power being in flux, challenged and even in crisis. This has in places forced it to openly talk about itself and hence its position. Examples of this include Royal Bank of Scotland after the crash, the Catholic church and its serial scandals, or the implosion of CBI Scotland in the indyref.

Across a number of public institutions a common pattern can be observed about the way power and privilege operate when they are challenged. The three different examples chosen to illustrate this are one traditional force which imploded (Glasgow Rangers FC), one body which has played a central role in society (BBC Scotland), and another which has relatively recently become one of Scotland's dominant institutions (the SNP).

First, take Glasgow Rangers FC. They have provided one of the biggest and defining stories of modern Scotland. They were the dominant football club in the country and had their origins in what was the dominant religious tradition: Protestantism. They were, as the saying goes, more than a football club but a way of life.

In 2011-12 they hit trouble, entering first administration, then liquidation, having to start life again in the fourth tier of senior league football. Lots of emotions and feelings were hurt, aggrieved or felt slighted on all sides. Some still haven’t recovered. But this is also a very human story wherever you sit – pro or anti-Rangers, or on the sidelines observing the debacle.

Through its various owners since 2011 – David Murray, Craig Whyte (currently the subject of a court case), Charles Green, Dave King – the club has lost its certainty of its place in Scotland and is still struggling to refind it. This is all the more painful when the club, coming from where it does, has an entitlement culture to be successful, and a rivalry to continually feed with its arch rivals, Celtic FC.

Through all the club's travails, its owners have never offered a mea culpa or heartfelt, genuine apology to the team's supporters or the world of Scottish football. The club's owners car-crashed the club, engaging in corporate misgovernance, dodgy tax arrangements and more, and all with not the slightest sense of social responsibility, or reflections on their actions.

This matters as it has left this whole sorry episode as unfinished business; with a portion of the Rangers support furious, not at the various questionable owners who have passed through the club and board, but at other teams and their fans, for the club having to start again in the fourth tier. Some Celtic fans pursue to breaking point the argument about Rangers oldco and newco, and the line that the old club (which they obsessed about) being dead, while arguing that the new one they obsess with has no direct link to the old. And no lead has been given by the football authorities in trying to understand the Rangers' crash, to prevent it happening again, and to heal the wounds that have been created.

Second, the role of the BBC. More and more it faces flack from all directions. From the right-wing complaining about it being a public monopoly, the compulsory nature of the licence fee, and its liberal bias on things like climate change. From the left on its pro-corporate capitalism, lack of holding power to account and cowardice when big stories break such as the Tory MPs and Crown Prosecution Service expenses, or how it has covered Corbyn's leadership of Labour. And then of course there is Scottish independence.

The BBC along with ITV and Sky did not have a good independence referendum, but of all the broadcasters, it is the BBC which is singled out because of its special place and funding. Leaving aside the more partisan pro-independence conspiracy theories which even see the BBC weather map as a slight on Scotland, the BBC post-referendum decided in its wisdom not to have a proper post-mortem in either Glasgow or London about its Scottish or UK coverage.

Successful, adaptive organisations continually learn and evolve, including from their mistakes. But the BBC has never given itself the chance to do so in relation to the indyref. This is a failure of the senior management at BBC Scotland and BBC UK: one which illustrates how those with power inside it see themselves and their mission, and thus doing make it obvious that it is not about understanding Scotland, politics or how to improve broadcasting.

The BBC, like all big institutions, is a human community made up of thousands of people, the majority of whom are committed to their jobs and want to do the best. Many in BBC Scotland felt sidelined during the indyref, and even worse, felt patronised by BBC UK and senior London staff who would fly up on the red-eye to cover the story from the most narrow, predictable angles.

The BBC's inability to have a proper post-indyref review has had big consequences in Scotland and the rest of the UK. It has meant that the huge democratic explosion and spirit of the three-year indyref campaign, was deemed by BBC hi' heiduns to have no relevance for the Brexit referendum campaign. This resulted in a subsequent campaign which was even more fact-free than the indyref, and in which broadcasters didn't hold the two sides and, in particular, the Leave side to proper account.

It has also meant that things haven't moved on here as they should have. This despite the spectre of another indyref sometime in the near future. Various parts of Scottish nationalist and independence opinion are still furious at the BBC, which they probably would be whatever happened. But more importantly, after all that energy and noise, the BBC has gone back to covering politics in the most predictable manner as about the Scottish parliament and Westminster and not much else.

Third is the SNP – which offers a very different story from the above two. The SNP is unquestionably the dominant political force in the country and will remain so whatever happens in the forthcoming UK election. Tuesday marked the 10th anniversary of the party being in power in Scotland – when Alex Salmond was elected to lead a minority government.

Success changes you and alters how others see and judge you. The SNP has enjoyed significant electoral successes: 2011, 2015 and 2016, but it also lost the indyref. Rather illuminatingly, this pivotal defeat for the SNP and its main cause, independence, has brought forth at the highest levels of the party no inquest, and no major calls for such an appraisal of this defeat.

Instead, in what is now over two and a half years since our referendum, the SNP has kept itself and the country on continual political heat – and seemingly used this to avoid a serious reassessment of what was missing in the independence offer last time.

This has consequences for politics today, because one of the biggest learning curves politicians go through is defeat, which offers an element of catharsis and even liberation from out of date, antiquated ideas. Labour in 1983 and the Tories in 1945 used emphatic defeats to rethink and distance themselves from their own past failures. The SNP has given the independence cause no such opportunity to learn and grow, with parts of it – Alex Salmond being a good example – perennially going on about how they were robbed by others.

While sections of independence opinion have tried to reflect on the inadequacies of the 2014 offer, this hasn't been reciprocated by the SNP. This feeds into the attitude of the SNP today and the possibility of another independence referendum. Is the SNP's leadership's plan that they just announce as if by magic a new detailed vision of independence, one which explicitly accepts the shortcomings in the previous offer? This isn't good, mature or healthy politics, and belies a lack of confidence and self-belief. And this has cost all of us – as it has diminished the chances of the country and our politics growing and maturing.

These three accounts have one common thread: the inability of power to say sorry to those it has let down and has a responsibility to be honest to. This is what power does once it becomes entrenched. It takes us for granted. It pretends it has our interests at heart. But really the most important thing about power is the maintenance of power.

The three different accounts are all very different in many respects. Glasgow Rangers FC's dominance of Scottish football began in the twilight years of Victorian Scotland and was reinforced by what the football historian Bob Crampsey referred to as the cartel nature of the old firm. The BBC was born of a Britain and Scotland which no longer exists: one where people were meant to know their place and not question those who supposedly knew better. Meanwhile, the SNP has come of age in a very different time and age; one that is meant to be more democratic and sceptical, and where all authority is, we are continually told, conditional and temporary.

Some will even be offended that no matter how I have qualified the above I have drawn some shared experience between the way Rangers FC, the BBC and SNP post-referendum have behaved. But that makes the point. Each of the above has been able to get away with the path of least resistance and reflection because part of their core constituency has allowed them. Senior personnel in each of the three have known this and milked it in a style which diminishes all of us and our society because it doesn't really treat us as adults, but children. Maybe that is a bit harsh in each of the cases, but we have to kick out against the silences and evasions in each of them. Ultimately, as well as harming us, it harms the institutions in question, and how they evolve and adapt now and in the future.

It is hard to admit to shortcomings, but it is vital to grow, reflect and mature. For some in Scotland it really seems as if the words of the Elton John song are still true. Sorry seems to be the hardest word.