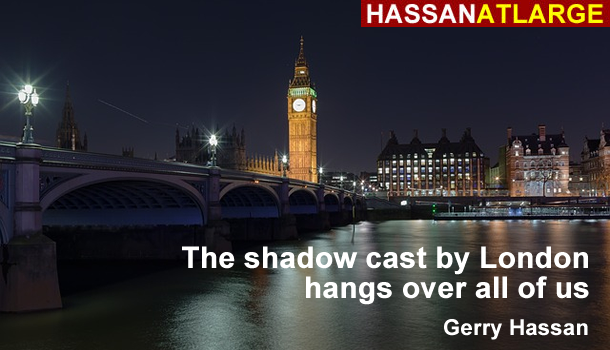 Every day in so many ways the UK becomes more obviously divided and fragmented. The current UK general election campaign showcases this. The absence of any real national UK politics beyond the theatre of Westminster is filled with numerous national and sub-national debates.

There are, along with Scotland, Wales and Northern Ireland, several different Englands. And then there is the special case of London. As the capital of England and the UK, London is an island apart from the rest of us. It is a world city, a global magnet and an international force – economically, socially, culturally.

I spent last weekend in London with friends. Experiencing the city is to reflect on its dynamism and variety, but also on how utterly different it is from the rest of the country. And this difference increasingly matters – both for how London sees itself and the rest of us, and obviously for the non-London population of the UK.

London is one of the drivers of the UK economy. The Greater London area contains over 8.6 million people – 12.5% of the UK population – while making up 22% of UK GDP. Its wealth dominates the UK economy. Inner London's GDP per person in 2010 was 328% the EU average, compared to 70% in west Wales – the biggest gap in any EU state.

This is the divided, winner/loser UK which now defines much of our lives. The scale of this is so dysfunctional that, according to academic Danny Dorling, only Moscow among major global capitals accounts for a bigger share of a nation's wealth: hardly a positive indicator.

London is not one homogenous place or community. It is shaped by huge differences in life experience and inequalities: ranging from poverty and hardship which are stark and shocking in one of the world's richest cities to the garish pursuits of the international jet-setting class of plutocrats.

House prices in the city disfigure the entire UK with the borough of Kensington and Chelsea having average house prices of more than £1.4 million. High demands for housing means that every single spare piece of land in London is the site of high-rise, expensive apartment developments, and what were once modest homes for the working classes (including inter-war council flats) can now sell for hundreds of thousands of pounds, if not millions.

This fed into the backlash against Theresa May's ill-thought through care policy which has emerged in the last few days. One of the main critics has been the London Evening Standard edited by ex-chancellor George Osborne who has led the charge that the original policy, now the subject of an embarrassing Tory U-turn, was somehow anti-London, anti-aspiration, and even in the words of some, 'socialist' and unTory.

London is also a beneficiary of large swathes of public spending, from the number of UK civil servants based there, to the focus of much infrastructure spending and public subsidy. It is only exceeded in public spending per head by Northern Ireland and Scotland: a financial reality seldom reflected upon by Tories or Labour.

It is a huge magnet and in 2014 took an incredible 45% of all graduate advertised jobs in the UK, while also containing 36% of the country's entire migrant population. London's population is growing each year and becoming more diverse. But within these changes more working-class Londoners and those on average and lower wages are slowly being pushed out of the city by the pressures of house prices and scarcity of affordable properties.

London is the financial services capital of the UK and the world. It is a badge it wears with pride but increasingly this comes with negatives. The UK financial services are some of the main culprits in the overheating and lack of balance in the economy, in the implosion of the banks and the lack of contrition in the years following. More profoundly, the City of London is disconnected from the concerns of the UK economy, and even springs from and retains an anti-industry ethos which has its roots in the 19th-century, gentlemanly capitalism and empire. Thus, the City's very success in recent decades has in many ways held back the UK economy and society.

The way in which the UK is portrayed has altered since the re-emergence of London as an economic powerhouse. Much emphasis is placed on the London-centric nature of public life, and what Westminster, the media, think tanks and corporate groups believe constitutes UK 'national interest'.

A new narrowing and centralisation of power and focus has emerged. London is continually presented as both unique and the universal, as a city which demands special treatment and status, as a lesson and example to all of us and as the backdrop to the nation's stories.

Paradoxically, this deep-seated and unapologetic centralisation has occurred at the same time as political devolution to Scotland, Wales and Northern Ireland. In many respects, devolution has actually aided centralisation because it has reinforced the Westminster classes narrowing what they think of as the UK 'national interest'. This is seen increasingly as the same as that of London elites and interest groups. Moreover, the three devolved nations have been put in a category of 'job done' for the first decade of devolution, and now post-indyref and Brexit vote just viewed as troublesome.

The fate of the London/UK relationship is for the foreseeable future going to continue to be difficult and filled with tensions and resentments on both sides. There seems little prospect in the near future of it being reset on some new wavelength: one shaped by mutual understanding, respect and in the context of a more egalitarian and democratic UK.

How then do the 78% of us in the UK who do not live in London happily and peacefully co-exist on this set of islands with the global city? It casts its shadow over all of us and spellbinds many. Even if Scotland became independent the pull and dynamics of London would still have a huge impact on what happened north of the border, economically and politically.

Perhaps we are looking through the telescope the wrong way. Maybe one option would be to make London's de facto independence from the rest of us formal. Or at the very least we could float out the London elites to somewhere in the middle of the Atlantic, matching how they see and use their relationship with the UK: as semi-detached and offshore. These aren't practical and realisable, but something has to be done. London, once such a positive driver for the UK, has increasingly become part of the problem, dominating and overshadowing the rest of us.