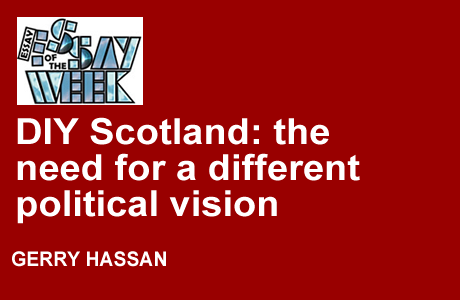 Language, words and how people communicate matter. Yet many would agree that much of the conduct of politics and politicians – and even public life in Scotland and the UK – falls short and leaves a lot to be desired. There is a lack of straight-talking and honesty, and over-use of worn-out phrases and expressions, along with attempts to close off debates by caricaturing and stereotyping opponents and their arguments.

This week David Cameron decided to invoke, in relation to Brexit, not just security, defence and conflict concerns, but the prospect that the third world war would be more likely. This is an arms race of scare stories which starts with living standards being threatened by political upheaval, and ends in the spectre of armageddon and potentially the end of humanity as we know it.

Scotland has been developing its own march towards hysteria beyond the manufactured threats of Project Fear. In the most uncompromising nationalist accounts of Scotland there is much accusation and concern about betrayal, perfidy, treachery, the odd quisling, and what seems akin to an occupation of the mind. This perspective perceives organised conspiracy everywhere in our history and today. There was the historic wrong of the union with England, bought by a 'parcel o’ rogues’ which no one in the population voted for (ignoring that these were pre-democratic times, and the same was true of England), to what the union supposedly did to Scotland – imposing injustice after injustice upon us, either against our collective will, or without asking.

The union meant that we sent off our troops and forces disproportionately to die for King and country on the killing fields of Flanders to, in more recent times, the sins of Margaret Thatcher and the poll tax, and of course, Tony Blair and the Iraq war. It reaches its apotheosis of over-statement in the indyref campaign when it was put forward that the BBC 'stole’ the referendum, implying that somehow they had ownership and could manipulate the result. Another perspective actually counted up over months the number of times TV presenters interrupted Alex Salmond compared to Alistair Darling, and found the former was getting a worse deal, and this was proof of bias.

There has also been a tradition for a large segment of unionism to not understand the existence or appeal of Scottish nationalism. Years ago it was dismissed as a gang of isolated eccentrics who spent their time blowing up postboxes or stealing the Stone of Destiny. It was seen as a throwback to ancient or feudal times (Eric Hobsbawm), or having nothing to say in times of globalisation and interdependence (Gordon Brown et al). It was in these accounts, an anachronism whose obvious contradictions and irrelevance to modern times, should be obvious to all once it was pointed out.

Now we have 'Ulsterification’ – a term coined by STV journalist Aidan Kerr – meant to define a society where the constitution and identity matter more than class and left v. right. Taken literally, this would mean a real one-party state that lasted 50 years, alongside murders, bombs and armed camps. In 30 years of the Irish troubles, 3,452 people were killed which is very different from Scotland over the same period. It is an over-the-top term – inaccurate, patronising and pathologising and equally insulting to the hurt that Northern Ireland went through, as well as to the more mundane concerns faced by modern Scotland.

It can be seen as part polemic and provocation – which was perhaps its original spirit and how David Torrance invoked it this week’s Herald. But after that, does such terminology aid or hinder political understanding? In reflection, surely it doesn’t help anyone. It doesn’t assist us in opening up or understanding anything about ourselves. All it really does is offer the prospect of trying to delegitimise the state of the nation, and close down debate.

There are big problems in Scottish public life – of the mutual claims of two nationalisms (one Scottish, one British) and part of each side has an exclusive, exclusionary vision of society. Even when they are one of the more generous, civic variants on both sides, a debate of two nationalisms is still by its very nature restricted. Another challenge we have is the conceit of progressive opinion that somehow Scotland can work out harmoniously all the major challenges developed societies face and struggle with: the 'political change is easy’ line peddled by some in the indyref which is delusion.

Naming and defining things really matters. 'Ulsterification’ won’t do; but we do need to find names and descriptions for this binary, black and white, parallel line Scotland. That’s important, but so is recognising that most of us don’t live in a Manichean, Heaven or Hell, nation. The Scotland of inbetweenies, moderately centre-left, concerned, compassionate, more collectivist and less individualist than England, needs to find an accurate set of terms and terrain. 'Middle Scotland’ will not cut it, being compromised by its connection to New Labour and having a general vagueness.

The Scottish election showcased the boundaries of a politics which talks about abstracts and generalities usually without defining them: 'opposing Tory austerity’, indyref2 (irrespective of whether you are for, against or just agnostic), and talking about fairness and inequality. These are terms which don’t mean that much to many, if not most voters, and those who live outside the political bubble.

Two years ago, I commissioned research by the Electoral Reform Society into what I called 'the missing Scotland’ of non-voters: the people who had over the course of the devolution era and years before become disconnected from voting. This 'missing million’ can be found in every street, community, town and part of the country, from west and east, to Highland and Lowland, urban and rural, poor, muddling through and affluent.

What emerged was that non-voters are as politically concerned as voters. What marked their views as different was that they doubted politicians could make a real difference which impacted upon them, and that the issues which concerned them the most were much more tangible, focused and grounded – about the local, family, neighbourhood, and not about such generalities as 'austerity’ or 'inequality’.

This struck me as very relevant last week after the response to my Scottish Review piece on Govanhill. Here is an area of the southside of Glasgow struggling to get noticed by decision makers, to find voice, trying to do things, and find a language and means of expressing what it is doing, locally, city-wide and nationally. Trying to describe this, as best I could, I felt a responsibility to try to explain complex, sometimes confused, ill-defined debates and differences accurately and with respect. It is important to do this without browbeating people with insulting or derogatory terms, saying this or that view is 'racist’ or a 'left-wing luvvie’. Similarly, saying an area is on the verge of meltdown, 'blowing’ or becoming a 'tinderbox’ as some disillusioned local voices have is even more unhelpful than pretending that everything is all right in modern Scotland.

It shows that politics and public life has to have an appropriate space for understanding the importance of place, localism, and how communities are best supported. All politicians of every hue will say they get this, but the dominant strand of Scottish politics pre- and post-devolution has been in the opposite direction: of centralisation, standardisation, creating national bodies out of regional ones such as Police Scotland and Fire and Rescue Scotland, and removing local accountability. This didn’t begin with the SNP, but has been ongoing since the 1920s and 1930s, was then given a flip by Labour’s post-war welfare state, 1960s and 1970s rationalisation, and subsequently, the arrival of the parliament.

Indeed, the rise of a more distinct Scottish agenda and interests has directly reinforced this centralisation in public life: a trend which seems barely to be understood by our politicians. A public realm which sees itself as more autonomous and divergent from the rest of the UK has seen power more concentrated and held in a few hands in Scotland.

The stories of the Govanhills is that local voice, muscle and power has to find expression, as does ambiguity, uncertainty and popular anxieties about how such places flourish and blossom. It cannot come from the Scottish Government locating all public agencies in centralised hands, leaving local government as little but a pretence: neither very local or democratic. How does system Scotland – whether SNP, Tory, Labour, or its advisers – recognise the limits of centralisation and the need for a mosaic of local voices and power?

This has to entail a politics beyond the parliament and beyond professional politicians. Independence as 'the full powers of a parliament’ strikes me as a major negative. I want to live in a country where, whatever our constitutional status, the national parliament has less, not more powers.

This would be a society which understood the importance of nurturing relationships, and putting time and resources into them. A good example of the limits of traditional politics was the SNP manifesto’s welcome commitment to giving baby boxes to each newly-born infant. This draws from the Finnish example, and while it ticks the universalist principle, too much focus went on what would be the contents of the box. What matters most in the Finnish case isn’t this, but how it builds face-to-face relationships between professionals and support people and fathers, mothers and children. People who studied Finland tried to stress this to the Scottish Government, but such a human element was entirely lost in translation. That happens too much.

Traditional ways of doing politics, parties and even policy are close to exhaustion. There is sometimes a conceit in Scotland that we somehow get this, have transcended it, and are different. We need a different language, practice and way of thinking and doing things. Some of the answers come from being much more human and humane, and understanding the power of contact, interaction, and relationships, but at the same time, we have to allow for multiple versions of society and Scotland.

When will our politicians get that the society and future they offer is a self-denying, restrictive one, and that we cannot change things by ministerial decree, centralising and endless talking about generalities? Why don’t we dare to sketch out a different vision: of a more DIY Scotland, organic, self-organising and about spreading and sharing power and responsibility? Not only could it work, it might be more exciting and enjoyable. And let’s try and come up with a more accurate and uplifting description for it than 'Ulsterification’.