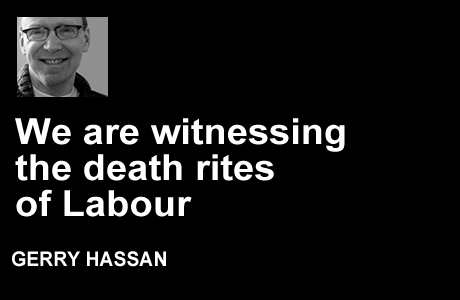 These are surprising times in Britain and its politics. Cameron gone. England and Wales dragging the UK out of the EU. The England football team defeated by Iceland. And somehow Jeremy Corbyn was meant to be the antidote to these political times.

He was different from the typical 21st-century politician, a throwback to the days when all male left-wingers were like underpaid sociology lecturers – badly-dressed and presented, rambling but affectionate and with their heart in the right place. Corbyn was never the answer, but he has quickly become the problem, and part of a much bigger set of problems that can’t be ignored – namely, will Labour survive?

It is understandable that some want to stand by their man against right-wing plotters, the media and enemies everywhere, but it is time for Corbynistas to think of more important things:

1. The election of Jeremy Corbyn was a shock to everyone in British politics – himself included. He never initially wanted to be, or thought he could be, in charge – and he was right to make such a call.

2. The Corbyn revolution was a reaction to years of discredited, manipulated, managed politics, and in particular, the years of Blairism and New Labour. That’s only natural; but it is not enough.

3. Many people understandably wanted a more authentic politics. One less slick and spin driven; less focused on presentation and personalities. In their revulsion from a politics of command and control, Corbynistas have embraced the exact opposite: a more incompetent politics.

4. Corbyn was elected on 12 September last year. It has been an unimpressive nine months since then. John McDonnell on Sunday asserted that: 'We are on the path to a majority Labour Government’. Corbynistas have cited the four parliamentary by-elections since and the May local by-elections as proof of progress, but in reality, they show a very mixed picture. At best, it is one of survival, and other evidence, such as Labour or Corbyn’s poll ratings, paint a much gloomier situation.

5. Anger against the New Labour and Tony Blair years and the state of politics today is not enough. Nor is describing anyone who disagrees with Corbyn and McDonnell as 'Blairite’ accurate or helpful. If this were in any way true, most of British politics, and large parts of Scottish politics, including the SNP, could be called 'Blairite’.

7. Labour historically doesn’t do coups against leaders. George Lansbury was pushed out the door in 1935, but technically fell on his sword after Ernest Bevin humiliated him at a Labour conference. There was the failed coup against Blair in 2006, which led to him resigning more prematurely than he wished in 2007. That’s the sum total of Labour moves against leaders in its history. Until now.

Historically Labour’s attitude to their leader has been one of constantly undermining, plotting and briefing against them, but of ultimate loyalty. Thus, the culture of dissent and factionalism is the relief valve to leadership loyalty. The origins of this are to be found in the ethos of labourism, and how it has been shaped by the experience of the labour and trade union movement through the years, and working-class solidarity. It is one of the few, perhaps the only, tenet of labourism left standing.

8. The politics of principles matter, but so does the politics of competence, and being able to do things. Corbyn may be bad at doing things politically – speeches, strategy, understanding and performing at key political moments – but Team Corbyn are arguably worse. The infamous Corbyn vice film showed a couple of damning instances about what the 'new politics’ so heralded by the great leader actually amount to. And radical they turned out to be.

With the Tories on the ropes, Corbyn’s 'new politics’ involved letting them off. The vice film showed Corbyn discuss with his team the crisis of the Tories after the resignation of IDS, and Corbyn proposed not to bring the subject up in his response to Cameron. No one in Team Corbyn demurred.

Worse, last Friday, as the world post-Brexit vote emerged, Cameron resigned as prime minister. Corbyn at this point had already done BBC and Sky interviews, and, as he was on College Green, his team were asked by broadcasters if he would comment on Cameron’s resignation. To their incredulity, they were told that the leader of the opposition had done enough interviews and would not be commenting on the resignation of the prime minister. Basically, Team Corbyn are comprised of people who don’t know how to do politics.

9. The politics of principle continued. It is fine to rage at the crimes of New Labour, but Corbyn’s politics are formed in the hard left bubble which has existed as if the last 30, indeed 40 years, have never happened. Over that period, there have been huge and dramatic changes in the domestic and international economy, industry, class, capitalist power, and the ability of government and the state to make the progressive case, all of which have sailed Corbyn by and on which he has had nothing to say. Corbyn is a conservative, not a radical: a conservative left-winger, who believes the height of left-wing thinking was around 1975.

10. Anti-Toryism is one of the big leitmotifs of the left. But taking it to the extent Corbyn has done in the EU referendum is self-harming. The supposed logic was informed by the experience of the Scottish independence referendum, and the damage done by Labour sharing a common platform with the Tories. No counter is ever put to this account: of what voters think if you strategically agree with opponents, but refuse to share a platform with them as Brown did in the indyref, and Corbyn recently. As one voter said on the Victoria Derbyshire Show this week: 'Corbyn didn’t want to share a platform with the Tories, but is happy to do so with Hamas. What does that say about his politics?'

11. The EU referendum result has been matched by Corbyn’s misjudgement post-vote. The leadership claimed on the Friday morning after the vote that: 'Corbyn has showed that he is far closer to the centre of gravity of the British public than other politicians’. Subsequently, with the referendum result sinking in, they claimed that they had done all they could to win. Corbyn supporters like Paul Mason have trundled out this line – missing the basic math that the 63:37 divide of Labour voters contributes to the 52:48 Brexit victory.

12. Running through the Corbyn debacle are deeper historic weaknesses. One is Labour’s culture of insularity: of believing that what matters is the internal debate, winning the party, and getting the policy position correct. Labour insularity was created originally because the party was different from the others: it wasn’t a bourgeois party. Yet, now the idea of winning the party as everything, getting 'our’ policy right on Trident or austerity, is symptomatic of a self-reinforcement loop where speaking to the party faithful and true believers matters more than winning over voters.

13. This connects to a wider problem of growing left-wing infantilism and intolerance. There is a link between this and the demise of the original working class culture and ethos of 'them’ and 'us’ solidarity which gave sustenance and roots to the parties of the socialist and social democratic tradition. The last 40 years have seen the left retreat, humiliated and defeated, and the communities and worldviews of collectivism which gave an underpinning to the centre-left, wasting away. This has led to a howl of rage and anger from left activists – which is a response to the world tilting in the opposite direction, and feeling of powerlessness, which then produces the expression of the Corbyn phenomenon.

14. Another dimension of this is that Corbyn personally is the product of what is in effect, Labour aristocracy: the insular inner world of Labour and leftism which talked to itself. Corbyn’s own story is that his parents met in Conway Hall, London, on a committee about the Spanish civil war (which was well over by this point).

This Labour inner world is filled with characters: Corbyn, the Benns, Douglas and Wendy Alexander, Gordon Brown, to give a few examples, of people who grew up in the party as an automatic choice from the cradle. Douglas Alexander once said that when he was growing up, it was in a culture of anti-apartheid and campaigning for tackling global poverty, and that the bigger choice of party and tribe had already been made for him.

There is something about that experience which hurts Labour and the left, and warps the critical facilities of the people in question. A good example was the indyref, where many Scottish Labour people had never ever thought seriously of the merits of independence. They were against it because they were Labour, and it came from the SNP, and thus, they had no understanding of the appeal of it, to begin to put together a convincing argument against.

A final thought. Corbyn’s rise is a reaction to a whole set of crises, but it also represents a reactionary politics: a yearning for simpler times, and offering a simplistic explanation of what has gone wrong in Labour: boiling it down to New Labour and Tony Blair. If only things were as straightforward, and the correct leadership and line brought about change, the world would be very different. But underneath this is a hope to turn back the clock to pre-Blair or pre-Thatcher, with little historical knowledge of what was wrong then, and why they arose.

Corbyn is an embodiment of a political culture which is passing away: labourism and the left variant of it. There was never any real prospect of his leadership creating the space or resources to herald a genuine 'new politics’, but instead his interregnum means that the party’s future looks even grimmer than it did a year ago after the 2015 election defeat. The British Labour Party, just like its Scottish offshoot, does not have a divine right to exist, and on its current behaviour, it is literally fighting for its life.

So far the Corbynista-McDonnell left don’t seem to recognise much about this. They are, in ways they don’t seem to understand, as much prisoners of Labour’s culture, as those who have passed before them, shaped by this culture of insularity and an outlook of party supremacists, trapped in the notion that a mythical past is what matters, and revisiting and wanting to rectify previous defeats. These latter points were always the way Labour thought of the world: from Taff Vale, and the general strike of 1926, to the bankers’ ramp of 1931. It is a worldview which has ill-served Labour.

The politics of Corbyn and McDonnell are part of the death rites of Labour. At this late stage, when the UK faces so many challenges, and a hard-right ideological project to take the UK out of the EU, changing leader isn’t enough. Switching from Corbyn to McDonnell would be an even more dangerous serious note. The days of labourism and its left variant are over. We are getting close to saying that the days of Labour itself as a serious electoral force are coming to an end. Is that really what Corbynistas want to be part of?