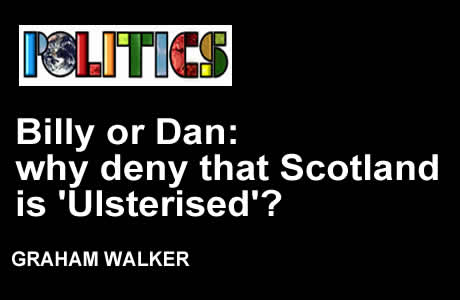 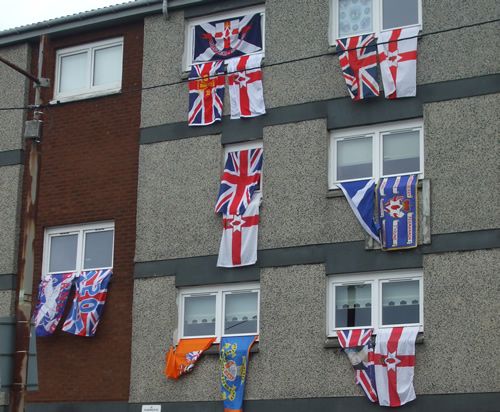 Back in February of this year a contributor to the letters page of Scotland on Sunday objected indignantly to the use of a photo of a Northern Irish flute band in connection with a story about Scottish politics. I was reminded of this during the recent stushie over the application of the term 'Ulsterisation’ to discussions of the current state of politics in Scotland.

The suggestion that Scottish politics has become 'Ulsterised’ has triggered fierce rebuttals, so fierce in fact that conclusions might be drawn about raw nerves being touched. The blanket condemnation of those who have dared to see something pertinent in the term threatens to create a situation in which legitimate explorations of Scotland’s many connections with Northern Ireland – and yes, some are political – are frankly discouraged.

This would be a great pity, and totally contrary to the spirit of the various initiatives that took root in the early days of devolution to bring such connections and interactions to light. Or is it the case now that only certain Scottish-Irish links congenial to the new mood, such as the Easter Rising’s Scottish participants, are to be deemed worthy of our attention? Nothing awkward, it seems, particularly the tribal politics of Northern Ireland, is to be associated with the new supposedly forward-looking Scotland.

It is a blessing that Scotland was not drawn into the Northern Ireland troubles that raged for close to 30 years. Much largely unsung effort on the part of various political, clerical, and civic leaders contributed to that outcome. Nevertheless, it came at the cost, first, of Scotland’s self-exclusion from the debates over resolving the Northern Ireland conflict to which it might have made a valuable contribution.

In 1985, following the signing of the Anglo-Irish Agreement (the terminology itself is revealing) the late Hugh Brown, Labour MP for Glasgow Provan, admitted to the House of Commons that Scottish voices were missing from the debate: 'One of the things that we have to offer is that in Glasgow and the West of Scotland we understand what a Billy and Dan situation is'.

Second, fear of 'contamination’ by the troubles meant that the conversation Scotland needed to have with itself about sectarianism was in effect postponed. When it eventually did take off – coinciding, significantly, with the Northern Ireland peace process – a lot of dubious concepts and agendas were brought to it.

In a new book – 'The Labour Party in Scotland: Religion, the Union, and the Irish Dimension' (Palgrave-MacMillan) – I trace the way that issues such as religious sectarianism became matters of great public concern in the new political context of devolution from the end of the 20th century; and I argue that developments around the issue – high-profile government summits, new legislation in the Scottish Parliament, intense debate over the extent and nature of the problem – all fed the growth of an identity politics that complicated class concerns and loyalties. Catholics, for so long the backbone of Labour support, ceased to see the party as their protector, while working-class Protestants in many cases began to resent the way they were side-lined as both Labour and the SNP targeted the Catholic vote in their power struggle in the new Scotland.

The response to the 'Ulsterisation’ claim in a way echoes the refusal on the part of so many contributors to the sectarianism debate of the past 15-20 years to consider the extent of the Irish influences in Scottish life and their persistence. Scotland is not Northern Ireland: they have very different political histories. However, the main difference revolved around the dominance of class politics in Scotland and its weakness in Northern Ireland. These days that model in relation to Scotland has undergone significant change. Class matters, but then it has always mattered in Northern Ireland too. In both places now, there is an ambiguous relationship between class and the respective national questions.

Sectarianism is not the same phenomenon in both places, yet there are enough similarities to make serious comparative analysis viable and potentially beneficial. This, consistently, has been eschewed by those tasked with addressing the issue in Scotland. There are many Scotlands, and in some of them there are affinities with Northern Ireland that can influence political behaviour.

I write this as news breaks about the probable scrapping of the Offensive Behaviour at Football legislation. This law was meant to curb the singing of certain songs, chiefly those favoured by Rangers and Celtic fans involving words like 'Fenians’ and 'Huns’, and references to Irish historical events and the Northern Ireland conflict. If linking Ulster to our affairs is to be regarded as somehow eccentric and wrong-headed, or even mischievous, where do we go with our discussions of this political matter?

GRAHAM WALKER
Politics
Billy or Dan: why deny that Scotland is 'Ulsterised'?

DAVID TORRANCE
Notebook
I didn't intend to offend or provoke. But I did anyway

GERRY HASSAN
Essay
Peak Nat? The party that stopped speaking to the nation

JAMES WILKIE
World
The ring is slowly closing around the fanatics

AMY JARDINE
New Voices
Did I ever tell you about the time...?

TOM MORTON
Media
Pirate radio was 'just a noise'. But it was our noise

CATHERINE CZERKAWSKA
Favourites
A personal selection of things of value

Next edition of the Scottish Review: 25 May 2016
Sign up free