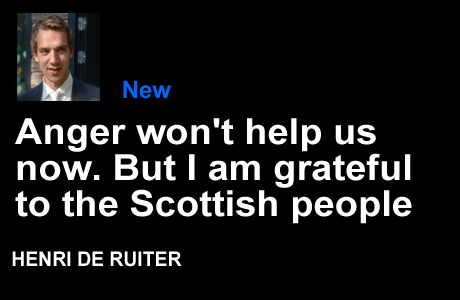 A second perspective on the situation facing young EU nationals in Scotland: from a PhD student at the University of Aberdeen and James Hutton Institute

'I want to take the opportunity […] to speak directly to citizens of other EU countries living here in Scotland – you remain welcome here, Scotland is your home.' It was surprising and also a bit unsettling for me to realise that I was comforted by Nicola Sturgeon’s words. I had never thought that I would take this referendum personally.

After all, it was always my intention to live in the UK for only a couple of years, and I had never experienced any hostile reactions to my presence here. Quite the contrary I would say: Scottish people are friendly and welcoming. Yet, after a long and nasty Brexit campaign which focused relentlessly on the topic of immigration, the victory for Leave felt like a slap in the face. It hit home that, no matter how hard we EU citizens try and despite our hard work, this country will never be where we belong.

Watching the nationalist drama unfold was a surreal experience. British politicians, elected by a 'first-past-the-post' system, were blaming the EU for a lack of democracy. People were blaming immigrants for the consequences of their own pro-austerity vote. Outright lies were allowed on the front pages of the tabloids – and expert opinion was ridiculed. Worst of all, EU citizens could not participate in the democratic process, while we would be among the most affected. It is difficult to see how any leader would take back control with the pound crashing and major businesses preparing to leave.

So what’s next? For me personally, the damage will likely be limited. My Dutch spouse and I have friends and family in the Netherlands, making it relatively easy to move back. However many others have little to return to and have to face an increasing hostility towards immigrants. Also, being a scientist, it would probably be much more difficult to find a job at a UK university, as a significant share of research funding currently comes from the EU. Therefore, it is tempting to be angry. Angry at older generations who jeopardised our prospects in life. Angry at my own generation who did not bother to show up in large numbers. Angry at politicians who gambled with Europe’s future to further their careers. But it won’t help us now. Clearly, people feel lost in our increasingly complex world and this needs to be addressed. The solution, however, can never be to just close the door and blame the other.

Marilynne Robinson, my favourite author, once wrote: 'When we accept dismissive judgements of our community we stop having generous hope for it. We cease to be capable of serving its best interests'. Even though it is tempting to dismiss the UK and its politicians, or the EU for that matter, as self-serving elites, we can still have generous hope for this country and for the EU. Nicola Sturgeon words reflected this, by making clear she values us, EU citizens. For that, I am grateful to her and the Scottish people. We needed it.

Henri de Ruiter is a former delegate of the International Young Scotland Programme, organised by the SR team