I don’t know the detailed history of Craigard House, but my old neighbour in Bute used to remember that, when he was a boy in the 1930s, a coach and horses would await the arrival of the evening steamer at Craigmore pier, to take Craigard’s owner the half-a-mile or so home.

You can still see what look like stables at the back of the house, which is in pretty good nick: red sandstone with decorative half-timbered gables in the English Tudor style that was a vogue in late Victorian Scotland. It marks the turning point on the regular walk we call ‘the Loop.’ First, up the hill and along the top of the wooded cliffs, then down again to the sea at Craigard to turn back along the shore road for home. The shore road is built on a raised beach and villas line it on the landward side. Craigard may not be the most architecturally distinguished of these, but its size and corner site make it the most noticeable.

There’s usually a car or two in the gravel forecourt and in the evening light shines from several windows. Some years after its coach-and-horse days, it was converted into a hotel – a memorial bench on the shore testifies to the happy times that a family had here in the 1950s – and then it became a care home. It has wonderful views across the Clyde towards Largs and Skelmorlie. An observer in Craigard’s front rooms can keep a watch on everything that moves up and down the firth: gannets, seals, yachts, freighters, liners, frigates, surfaced Trident submarines. The Clyde carries far less cargo than it did 50 years ago. Even so, you’d be unlucky not to spot half-a-dozen ships a day, excluding the ferries and, in summer, the pleasure steamer Waverley and the vast and rather ugly cruise ships that these days call regularly at Greenock.

I used to imagine myself as a frail old gentleman sitting in one of those windows with a telescope. ‘That’s the place for me when the time comes,’ I’d tell my family. ‘Just book me in there and your problems will be solved.’ I wasn’t being quite serious, of course. I knew that the view wouldn’t compensate for the lukewarm mashed potato on the dinner plates, the smell of old gravy and cleaning fluid, the faltering steps and repetitive mumbling of my fellow inmates, to say nothing of my own tragic condition. These things I could imagine. What I didn’t imagine was worse – that behind its lovely sandstone façade, Craigard was one of the most carelessly run care homes in Scotland.

After an unannounced inspection in September, Scotland’s Care Inspectorate reported that failure to observe safety regulations had put Craigard’s dozen residents at a high risk of harm. The inspectors found that while the home’s staff were 'caring and kind’ and the atmosphere 'welcoming and friendly’, a great deal else was substandard –bad enough for the Care Inspectorate to seek a closure order, an ultimate sanction that the inspectorate has taken only once before. Records of residents’ medication hadn’t been properly kept and untrained staff had been hired after inadequate employment checks. The report criticised 'malodorous’ furnishings, shared bedrooms and the 'extended periods of time’ that the residents sat in the sitting room with nothing to do.

Craigard will close in January, if not before. I no longer have the prospect of spending my last days there with a telescope, looking out to sea. The pale yellow light of its windows has lost the little it ever had by way of a welcoming glow.

Still, spare a thought for Craigard’s owner, who said she had tried hard to find a qualified manager. According to Scottish Care, which represents more than 400 private and voluntary care organisations, staffing is at a 'critical level’: nearly one nursing post in every four is vacant, with particular shortages in islands and hard-to-reach parts of the mainland such as Bute and Kintyre. Again according to Scottish Care, the vacancies are often filled by agency staff at an average cost per shift of £340, rising in some places to £800. How much the nurse gets paid after the agency takes its share is another question, but on the face of it these are astonishing figures.

I went recently to Stratford-upon-Avon to see 'The Tempest'. I’ve been only once before: the journey from London needs a change of trains and, a far greater inconvenience, the last train back leaves before most plays end. The choice therefore is to drive and get home after one in the morning or stay overnight and spend money. We stayed at a B&B – not cheap at £120, but the landlady was welcoming and the room large, comfortable, clean, and well stocked with chocolate biscuits. And the trip was well worth it – the new production of 'The Tempest' with Simon Russell Beale as Prospero and Mark Quartley as a half-digitised Ariel is beautifully done. We were entranced and moved by the play and awed by the playwright’s imagination.

Stratford the town is a slightly different matter. After it began to draw literary tourists in the 19th century, Stratford decided that it wanted to look as it did in Shakespeare’s time and took full advantage of the Tudor revival, adding half-timbered facades to previously dignified 18th century buildings and adopting crooked black-and-white as the default design for anything new. (At the outer reaches of this craze, which has origins other than Shakespeare, are the gables at Craigard.) Stratford now has a half-timbered Jack Wills, a half-timbered WHSmith and a half-timbered kebab shop, and perhaps half-timbered citizens also exist. Our landlady said the town voted Brexit and no mistake.

Why? The landlady said people were fed up with refugees who were forever crowding out schools and hospital waiting rooms, and angered by a plan to build homes for them in Stratford, which already had enough new housing estates. I don’t know about the refugees – the voices I heard in the streets came from North America, Italy and Japan – but the point about the housing estates was true enough. You still have to cross some open ground on the mile walk from Shakespeare’s birthplace to Anne Hathaway’s cottage, but mainly you walk through a suburb. No refugees, however, unless you count white men with Brummie accents walking their dogs.

This has been a wonderful autumn for apples. I have never seen so many on trees or scattered rotting on the ground, half-eaten by animals and birds. The overgrown gardens high above Craigard always have a few, but this year even the apparently barren old tree in our Bute garden decided to fruit. Anne Hathaway’s cottage, the Kentish Downs – we’ve seen apples everywhere, their crisp flesh and delicious juices unaccountably ignored by children whose grandparents long ago climbed walls to steal them.

'Stay me with flagons, comfort me with apples: for I am sick of love,’ says the Song of Solomon. But whatever our problems this year, an excess of love hasn’t been one of them. 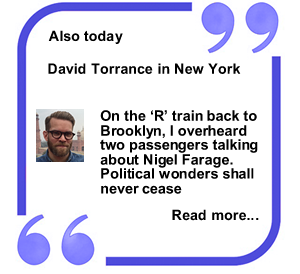 Thank you, Kenneth Roy, for a stimulating article on Scottish and British identity. Unlike him, I have not lost my copy of Edwin Muir's 'Scottish Journey'. The exact quotation he is remembering is: 'In the course of my journeyings I came in contact with these various Scotlands...but what Scotland is I am still unable to say...It has a human north and south, east and west, as well as a geographical; but though they have been clamped within a small space for a long time, one feels they have never met.'

I have abridged that slightly, but Muir's entire introductory chapter runs to only four pages – four pages well worth re-reading, and pages which I feel could usefully be printed large on the walls of our MSPs' offices, because they sum up eloquently the diversity of Scotland – geographically, culturally and politically. It is a diversity MSPs forget at their peril when devising laws and policies for the whole nation.

Donald Trump offers such consummate political theater – his gargantuan narcissism makes him so mesmerizing to watch – that it is to wake abruptly from an all-enveloping dream to realize that much of what he says has no content behind it. His assertions, framed in simple, concrete, direct language, are not policy statements so much as attitudes. 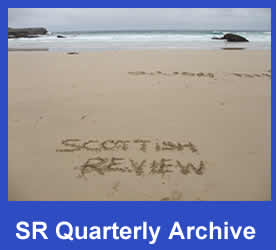