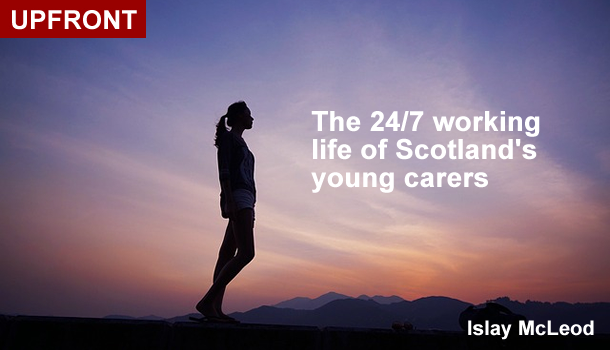 The caring profession must be one of the toughest, most underpaid jobs in the UK, if not the world. Even Japan, which values its elderly citizens, is falling short on the need for care. Tight schedules, a crammed workload, and unpredictable shifts. Who would do it? Well, many people do – for an average wage in Scotland of £14,665.

I went for an an interview myself, one gloomy, dreich day in Barrhead, early 2000s, where fellow jobseekers sat round in a circle (some there for the basic necessity of picking up their allowance) and were told the benefits and difficulties of such work. I was idealistic and enthusiastic but was soon pulled to the side. 'What if you were looking after a man in his 80s and he needed a bath or had an accident? Could you cope with that?' Further scenarios were implanted in my imagination and they swam around my head. This is a vocation, not a job, I thought. Plus, shamefully, I noted that the salary was barely five figures, if that.

According to the Scottish government's website, 'Free personal care is available for everyone aged 65 and over in Scotland who has been assessed by the local authority as needing it' and 'Free nursing care is available for people of any age who have been assessed as requiring nursing care services'. It is essentially up to your local social work services department to assess your care needs – and don't I know it.

My gran, a former nurse, was a difficult, housebound, immobile patient, with four carers each day. She was convinced that her training and experience, gained during the glory days of 'Doctor in the House', gave her a right to tell the carers how to do their job. Her behaviour (she was compos mentis with the mind of a 21-year-old) resulted in a visit from the head of social work from our council area. My gran got going and my sister and mum left the room embarrassed and upset, while I attempted to reason with my gran, who was once full of glee but now played games. The carers remained in place somehow, and my respect for them grew even more. How lucky she was.

But what if you don't receive this service and have to care for a loved one alone? In Scotland there are around 788,000 carers, saving the Scottish economy a whopping £10.8 billion each year thanks to their unpaid work. Of this number, 29,000 are young carers. But what does that mean exactly?

According to the NHS, 'a young carer is someone aged 18 or under who helps look after a relative who has a condition, such as a disability, illness, mental health condition or a drug or alcohol problem'. So clearly they can't be neatly pigeonholed or, worse, stereotyped. Let's think about that. So many young carers, so little time for the usual teenage delights – hormones and all. Each case is different. In this way it is difficult to offer a blanket support system.

Last Thursday was Young Carers Awareness Day 2017. A young carer can be aged five to 18 and take on responsibilities and pressures which we can't imagine.

Let's take just one scenario. Imagine a typical day consists of getting up and dressed, then assisting your mother or father out of bed, preparing breakfast, administering and setting up necessary medication, tidying up the house and then leaving to go to school. All this before 9am. After a long day at school you return home for a similar routine of dinner, cleaning, nursing, homework, and then bed. You are on 24-hour call, seven days a week. Heartbreaking as it sounds, this is the life of many young people.

It's no surprise to learn that the education of young carers often suffers, with difficulties in completing homework to deadlines and indeed general attendance of school. A survey carried out by Cares Trust Scotland found that a third of those asked admitted to having to skip school at some point most weeks. Even more worryingly, 82% also reported feelings of stress. In terms of future aspirations and desires, the results look bleak.

But ambition is so important to us. Ambition makes us fight to pound down heavy studded doors – some locked and unattainable – to become better individuals. Challenges are presented and we take them on to be what we wish to become. Without ambition, we merely dwindle through life with no strategy or direction. Hope and ambition are not always comfortable allies. Young or, indeed, child carers have to be given the chance to reach their aspirations in life.

Statistics suggest that 60% of us adults will become carers at one point in our life and that 10% already are. This is our hidden secret. Why not put ourselves in their position and think again?

In opposing Trump, we shouldn't
let the rage boil over
ALAN MCINTYRE