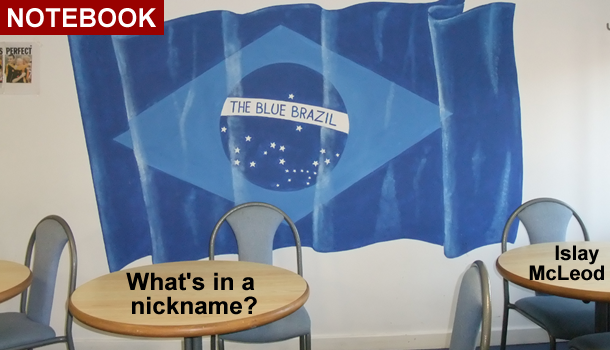 Are you part of the Gypsy Army or the Red Lichties, or perhaps you’re an Honest Man? Well, I doubt it unless you are a proud supporter of Clyde, Arbroath or Ayr football clubs. From the Scottish Premier League down to the Highland and Lowland leagues a history of nicknames exists. Some are relatively straightforward – the colour or design of a strip, perhaps a geographical location – but others are more intriguing.

Take for example Dundee United, known as the 'Arabs'. One variation of the story goes that in January 1963 the team were determined to play a Scottish Cup tie against Albion Rovers (the 'Wee Rovers') despite the icy pitch. Having used industrial-strength machinery to melt the ice, the grass underneath was damaged resulting in an over-zealous groundskeeper sanding the pitch by the bucketful. Dundee United won the game, playing well on the new surface and hence the nickname emerged.

History can therefore have a profound influence on nicknames. The Falkirk 'Bairns' may sound harmless enough until you realise it comes from the town’s rather menacing ancient motto: 'Better meddle wi' the de'il than the Bairns o' Fa’kirk'. And then there’s the 'Souters'. An old song of the Borders includes: 'Up wi’ the souters o’ Selkirk, for they are baith trusty and leal...'. Selkirk FC take this nickname, thought to hark back to the brave Selkirk men during the Battle of Flodden. The 'Honest Men' of Ayr derives from a line from Tam O’ Shanter: 'Auld Ayr, wham ne'er a town surpasses, For honest men and bonnie lasses'.

And what of industry, much now lost? Forres Mechanics or 'The Mighty Cans' get their name from their origins as a team – it alludes to the many men who travelled north to work on a new railway line which was being built during the 19th century. Inverurie Loco Works FC was founded by workers of the GNSR (Great North of Scotland Railway) in the early 1900s. Despite the GNRC soon merging into the London and North Eastern Railway in the 1920s, and then industrial closures of locomotive workshops in the 1970s, the junior football team kept playing with their original name. The club gained entry to the Highland League in 2001 and are still affectionately called the 'Locos'. More recently, Motherwell was once referred to as the steel capital of Scotland and Motherwell FC are still known nostalgically as the 'Steelmen'.

There are others deserving of a mention: the 'Scorries' or 'Candlesticks' of Wick FC (a scorrie being a young gull still in brown plumage); the 'Loons' of Forfar Athletic; the 'Harry Wraggs' or 'Jags' of Patrick Thistle; the 'Gable Endies' of Montrose; the 'Spiders' of Queen’s Park; and the 'Cattachs' of Brora Rangers (Gaelic for little cat).

But the two biggest mysteries surround the unassuming landmarks of Cowdenbeath and Stenhousemuir.

Some years ago I asked patrons of Cowdenbeath FC at Central Park about the origins of the 'Blue Brazil'. 'Dunno, it just is'. Did they liken their ability to that of the great Brazilian teams of years past and having suffered a bad spell, describe themselves as feeling blue? Or was it down to the club’s financial problems being compared with that of Brazil’s? Maybe they should have kept their original nickname of the 'Miners', the area having been involved in the coal industry for years.

Stenhousemuir FC themselves don’t know why they are called the 'Warriors'. Could it have been down to bad feeling when they broke away from Heather Rangers to form their club in 1884? Or down to a historical battle of some kind? Sadly a Google search for 'Battle of Stenhousemuir' sarcastically shows the distance on a map from Stenhousemuir to Battle near Brighton (which is 486.2 miles incidentally). So in this case, the mystery continues.

Readers are welcome to offer suggestions – and favourite nicknames.