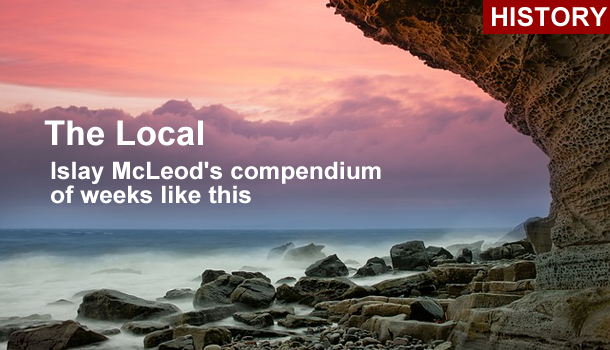 St Andrews Citizen
8 March 1930
'Painter's Fatal Fall From a Ladder'
William Weir Campbell, a youth of 19 years, in the employment of Mrs G Smith, painter, Market Street, was fatally injured through accidentally falling from a ladder while assisting in the painting of the front of a house, 6 Murray Park, on Monday forenoon. It appears that the unfortunate lad was near the top of the long ladder steadying the feet of another painter named Duncan, who was painting the woodwork of an attic window. Somehow or other Campbell lost his balance and fell a distance of about 25 feet to the pavement. He sustained very severe injuries to the head and body, and was removed to the Cottage Hospital in an unconscious condition. About two hours later he passed away. He was the son of Mr and Mrs Campbell, 102 Market Street.

John 0'Groats Journal
11 March 1853
'Tain: Warning to Parents'
On Friday last a fire broke out at Newton of Tain, in a house which was occupied by a travelling mat maker. His wife being from home, the man had gone out to procure some bent, locking the door on his two children, who, although there was no fire in the house, had contrived to get hold of some matches, which, it is supposed, they lighted and threw amongst some bent which was lying in the house. The fire was first discovered by a gentleman who was coming into town. He immediately gave the alarm, and the fire bell was rung. The door being locked, they had to force it open. Had they been two minutes later, the children would have suffocated, but they got them out with no further injury than their clothes being slightly burned. The eldest was but four, and the other three years of age. The house and effects were completely burned to the ground.

The Scotsman
12 March 1937
'The Poorest Child Can Have Milk'
What great things we may look for then, from the Milk-in-schools scheme! Under this scheme, every child in the land attending school, can enjoy Milk at a specially low rate. Most parents can thus afford this vital addition to the diet of their children. But even children of parents so poor that they cannot spend the halfpenny or so on Milk, are not handicapped, for necessitous cases receive the Milk entirely free. The Theme was authorised through the Milk Act 1934, and in Scotland the Milk supplied to the children is the production of cows certified free from tuberculosis. Perhaps it is too much to expect the consumption of school Milk by every child. Enlightenment spreads slowly – how slowly every teacher, welfare worker, health authority knows!

It is often the parents of children who most need Milk who do not realise its great value. In some cases, children given their Milk money to take to school have spent it on sweets! The taking of the Milk is entirely voluntary, and like most great voluntary reforms, it is slow to get fully under way. Nevertheless, about half the school children in those schools supplying Milk under the scheme, take the milk.

Many reports by School Medical Officers and other Authorities are now available for the different districts, and there is not one that does not report favourably on the results of the Milk ration on the health of the children receiving it.

Ardrossan and Saltcoats Herald
8 March 1889
'Ayrshire Personals'
Sir Edwin Chadwick's candidature for the Kilmarnock Burghs will still be remembered by a number. He is now 90 years old, and hale and hearty enough to bear the weight of new honours and the exhausting function of a public dinner. On Friday he was made K.C.B., and on Saturday survived a dinner at the First Avenue Hotel (this is not meant as a reflection on the dinner). Sir Edwin is the President of the Association of Public Sanitary Inspectors and the father of poor law reform and of sanitation. He has lived long, and has done so much good that he is certain to die happy. He comes of a long-lived race, for his father died at the age of 84, his grandfather at 95, and his two great grandfathers had lived to be centenarians.