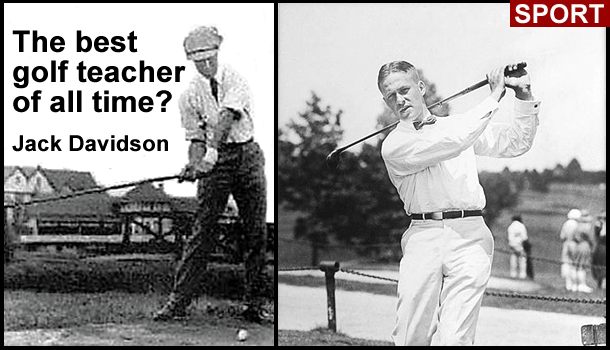 In the first 30 years of the 20th century it is thought that around 300 golfers left Carnoustie to become professionals in North America and play a major role in its 'golf boom'. One of those was Stewart Maiden, whose name will doubtless not be familiar to many here, even to fully paid-up members of the golfing fraternity. But he played a crucial role in the career of the iconic amateur Bobby Jones, winner of a unique grand slam of US Amateur, US Open, British Amateur and British Open championships by 1930, and co-founder of the Masters.

As he later wrote, 'The best luck I ever had in golf was when Stewart Maiden came from Carnoustie to be professional at the East Lake club [Atlanta]. He was quite properly known as my first instructor and from whom I learned the game.' Other star pupils included Alexa Stirling, daughter of a Peebles-born doctor who won three consecutive US Ladies' Amateur titles and top American amateur Perry Adair.

Building on his association with Jones's grand slam success, he established the Stewart Maiden golf school near Grand Central Station in New York in the 1930s where he gave lessons for $20. In advertisements by golf club manufacturers Wilson, reference was made to Jones's description of him as 'the first doctor of golf', and he designed top-selling grand slam clubs for Hillerich and Bradsby of Louisville, Kentucky. After scaling these heights he died aged 62 in 1948 and was buried in an unmarked grave in East Lake cemetery.

Over the years his achievements appeared to have been forgotten but last year justice was done to his memory when he was inducted posthumously into the Georgia golf hall of fame. At the same time a Stewart Maiden memorial park was created at the cemetery on the site of his grave and a memorial plaque erected.

Jones first met him aged six on his appointment at East Lake when, he recalled later, 'I couldn’t understand a single word he said.' Soon he took to following Maiden round the course, observing him play and later trying to copy his action. From time to time he received tuition from 'the taciturn Scot' whose 'Carnoustie swing' with its emphasis on hip rotation he succeeded in emulating to the extent that at distance they were sometimes mistaken for each other.

One of his tutor's strengths in Jones's opinion was that he did not try to fill his head with theories but his eye went to the critical part of the swing. His methods began paying dividends when Jones's precocious talents won him the Georgia Amateur title in 1916 aged 14 although success in majors eluded him till 1923 when he won the US Open with Maiden by his side. Thereafter he went on to win 13 and complete his grand slam by 1930. Despite never receiving a formal lesson from Maiden during that time, he frequently turned to him for welcome words of advice and the Scot was present at many of his triumphs.

Maiden was born in 1884 at Taymouth Terrace, a wedge-shot from Carnoustie Links. A talented amateur, by the age of 17 he was playing off a handicap of two and by 23, plus one. He won many local competitions including the prestigious Carnoustie Links title, setting an amateur course record of 71.

An 'artisan' player, one who paid reduced fees in exchange for working occasionally on the Links, he was noted for his graceful swing. Working as an iron moulder in the local foundry, it came as no surprise when in 1908 he followed in elder brother Jim's footsteps to America to become a professional. Through his brother's contacts, he secured the post at East Lake, Jim having been a previous incumbent. Jim also excelled in tournament golf, finishing third in the US Open.

Indeed golf was in the family genes. Younger brother Alan emigrated to Australia to become a professional in Melbourne where he taught Peter Thomson, multiple Open winner. Sister Jessie was married to Alex Smith of the Carnoustie golfing family. Alex and brothers Willie and Macdonald all emigrated to the States as golf pros, with the first two becoming US Open champions and the latter, runner up.

After Jones's highly popular win in the 1927 Open at St Andrews, in honour of the role Stewart Maiden had played in his career, he went to Carnoustie to play a round, accompanied by Maiden and others. Catching the 'Fifie' ferry from Newport to Dundee, a piper and civic dignitaries welcomed them as they disembarked before motoring north. At Carnoustie Jones was met by the provost who presented him with a key to the town. The party continued on to the war memorial to pay respects prior to being entertained to lunch at the town's Bruce Hotel.

A visit was paid to Maiden's mother in her garden while various old friends were met en route with mutually understated greetings like 'Aye Bob...Aye Stewart', indicative of a 20-minute absence as opposed to a 20-year one. Due to an ongoing 'derby' match between Carnoustie and Montrose, access to the Links could not be given till 3.30pm – Open champion or not! Watched by a crowd of about 6,000, Jones played a foursome with local amateurs – Messrs Hosie, Cant and Little. Thereafter the celebrations continued in the clubhouse to round off a memorable day.

By the 1940s there were reports that Maiden's marriage had broken up amid allegations of heavy drinking on his part. In early 1948 Jones arranged for him to become pro at the Peachtree Club in Atlanta but after only a few months he suffered a stroke and died four weeks later in November. By a quirk of fate he died in the same hospital where Jones was undergoing spinal surgery. In a fitting tribute, Harvey Penick, a widely acclaimed teacher of the game, described Maiden as 'the best golf teacher of all.'