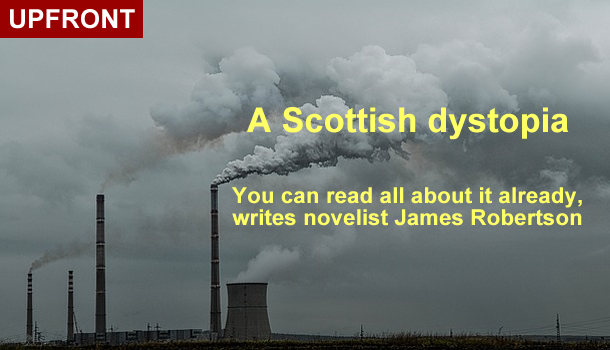 Walter Humes craves a dystopian novel, set in a future Scotland, that might chart how 'the triumph of achieving independence, amid promises of much better things to come, soon turns into a depressing story of economic decline, institutional failure, media control and growing tyranny by an embattled political leadership'. He is not hopeful of one turning up any time soon: 'Leading members of the Scottish literary establishment tend to have a very chummy relationship with the nationalist elite, so they are unlikely to possess either the ability or the inclination to produce a dystopian novel of quality'.

First of all, it does not follow that a writer who is 'chummy' with a politician or two, or even with a 'nationalist elite', consequently lacks the ability to write a novel of quality. Second, the idea that the likes of Val McDermid, Alexander McCall Smith, Ian Rankin, Irvine Welsh or A L Kennedy (I make no assumptions about the chumminess or otherwise of their relationships with the SNP, but they all fall into the category of 'leading' Scottish authors) would – or do – shy away from writing exactly what they want, for fear of upsetting politicians of any hue, is utterly laughable. Perhaps Mr Humes missed Val McDermid’s less than complimentary comments on the state of Scottish education as she sat alongside the cabinet secretary for education, John Swinney, on last week's 'Question Time' panel?

Anyway, which authors, specifically, does Mr Humes have in mind? Since my (non-dystopian) novel 'And the Land Lay Still' was picked by both Alex Salmond and Fiona Hyslop as their book of the year when it came out in 2010, perhaps he means me and imagines that I wrote it to please them, or that I wouldn’t like to offend them since they liked it? If so, I refer him to my criticism of Mr Salmond’s endorsement of Kenny MacAskill’s deplorable book about the Lockerbie bombing as 'the most credible explanation yet' of that tragic affair.

Without too much trouble, I can think of at least four recent Scottish dystopian novels. One is Ken MacLeod’s 'The Execution Channel'. Another is Highland journalist Michael Russell’s 'The Lie of the Land'. A third is Matthew Fitt’s 'But n Ben A-Go-Go', set after global warming has left all but the pointy bits of Scotland submerged. It is written in Scots, but this does not mean Mr Fitt is, to adapt a phrase of Hugh MacDiarmid, a 'lickspittle of the Scottish ascendancy'. A fourth is James Jauncey’s excellent novel for young adults, 'The Witness', in which land reform has led to civil war. These last two authors were, and as far as I know still are, in favour of independence, yet their novels are set in a post-independence Scotland where all is far from well.

Similarly, my dystopian short story, 'MacTaggart’s Shed', in the collection 'Republics of the Mind', is set in a future Scotland riven by ethnic cleansing. I really don’t want that future, but that doesn’t make it off-limits in terms of subject-matter.

Walter Humes – my favourite columnist in any medium – bemoans the lack of a good old-fashioned Caledonian dystopia in modern fiction. Such visions of Scotland are not that hard to find if he knows where to look.

He may enjoy C J Sansom's 'Dominion' where an independent Vichy Scotland is portayed as an enthusiastic collaborator to a victorious nazi Germany, or 'Scotch on the Rocks' by no less than Douglas Hurd, depicting a paramilitary uprising in the Highlands.

On screen, there is the enjoyable action film 'Doomsday', where Scotland is walled off from the rest of the world, and 'Snakes and Ladders', where the north and south of Britain are polarised – though some light is brought to the bleakness by the affable John Gordon Sinclair.

All these are perhaps more middlebrow than Walter would care for. So my recommendation is 'The Book of Scotlands' by Nick Currie, the Tokyo-based, Paisley-born artist who goes by the name Momus. This slim volume imagines many different Scotlands, both dystopian and utopian, always intriguing and often absurd. It also begs a question – what would be in your alternative Scotland? Perhaps your readers could send in short descriptions of their own imaginary futures.