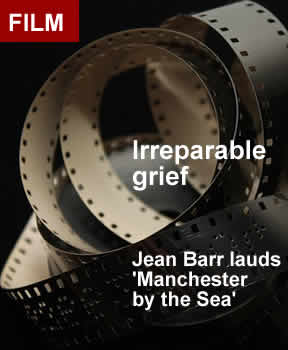 Kenneth Lonergan’s third feature film as writer and director is satisfyingly grown-up for a Hollywood production that deals with the theme of irreparable grief. Starring Casey Affleck as Lee Chandler, a janitor living a chilly existence on his own in Boston, 'Manchester by the Sea' is not for the faint-hearted. Lee bears the burden of a terrible tragedy. The structure of the film is built around withholding the nature of this tragedy until halfway through.

Apart from his job as a maintenance man for an apartment complex and drunken fights in bars, Lee seems cut off from any human contact. He returns to his New England hometown to take care of funeral arrangements for his brother Joe (Kyle Chandler) who has died of heart failure. Lee once lived in the fishing port with his wife, Randi (Michelle Williams) and three kids. On arrival he discovers that he has been named legal guardian of Joe’s 16-year-old son, Patrick.

Although we may feel initially that we are being led into the familiar redemptive Hollywood narrative of grumpy man saved by the responsibilities of parenthood, we quickly sense that no such comforting closure will be on offer. There will be virtually no hugging, scant learning from life, and little consolation forthcoming. Yet this pervasive chill and melancholy are laced with some wonderfully played comic scenes and moments of grace. When Patrick asks his uncle Lee if his girlfriend can stay the night, Lee's puzzled response is to ask: 'Am I supposed to tell you to use a condom?'

Patrick masks his own grief until, dismayed that his father cannot be buried until the earth thaws out in spring, a freezer spillage causes a panic attack. Lee’s tone deaf response is to say to his nephew: 'If you’re going to freak out every time you see a frozen chicken, I think we should go to the hospital'.

Lonergan sees little difference between comedy and drama, and in telling his delicate, carefully measured story, goes back and forth in time from the present to the past. Lee literally carries around his past as a heavy burden at all times, a predicament that gives the film its structure of two narratives unfolding side by side, one located in present time, the other inside Lee's head, as his memories unfold in flashbacks. This structure takes some getting used to because the flashbacks look no different from what is happening now. They simply cut right in without any warning.

Here we see Lee shovelling snow in a frigid landscape; he receives a phone call to say that his brother has suffered cardiac failure. By the time he has driven to the hospital on the coast, Joe is dead. Suddenly the scene switches to Joe sitting up in his hospital bed, receiving his diagnosis, surrounded by his wildly dysfunctional family, including Lee.

This use of fragmentary flashbacks is not arbitrary because the way memories pop in and out of Lee's mind (and onto the screen) is exactly how they work in real life. Lee has two tracks running in his mind all the time. Early on we see him on a boat with his nephew Patrick as a child and his brother Joe. He jostles and jokes. Through such flashbacks we are introduced to the key players in Lee’s story and to his own playful character before the events that are still to occur unfold. We meet his warm, sparky, smart wife, Randi, and their three happy kids in similar scenes of playful jousting, which bring warmer shades into the film’s mainly wintry palette.

'Manchester by the Sea' is wonderfully acted, with stand-out performances from Casey Affleck, Lucas Hedges (tremendous as the randy, troubled teenager Patrick) and Michelle Williams. Although Williams is on screen for only a few brief scenes, her performance is remarkable. Her brief encounter with the emotionally frozen Lee at a street corner – all overlapping dialogue and emotional rawness – will remain with you long after you leave the cinema.

But what really distinguishes this film from all others is its aesthetic of counterpoint and restraint. This is most apparent in its use of music. Lonergan favours combining original with borrowed music – especially classical and jazz – and he edits to the music. In view of this, Canadian soundtrack designer and composer Lesley Barber exercises considerable discipline in her strikingly original musical score.

Finding inspiration in hymns brought by the Puritans to 17th-century New England, her blend of a-cappella and orchestral compositions (mostly for strings and piano) unifies and supports what is happening in the film whilst complementing the borrowed classical music chosen by the director. Thus a short piece for cappella voices called 'Plymouth Voices’, first recorded in a tiny space and intentionally including the sound of the singer’s breaths between phrases, plays against a scene of Lee driving. The music seems to be coming from deep inside Lee’s emotional world.

There is an ethereal quality to Barber’s music that is very beautiful. It is difficult to imagine the film without her music – or without the specific pieces of classical music chosen by the director. This pertains particularly well to the key scene of the film.

The scale of Lee’s tragedy is finally laid bare in a truly harrowing scene, recollected in the lawyer’s office when he hears that he is to be Patrick’s guardian. He is emphatic: 'I can’t be his guardian', remembering the huge central incident that drove him from his hometown and wrecked his life.

The juxtaposition of the two scenes, one in the past, the other in the present, is stunning. In a typically understated sequence Lonergan’s camera focuses on the faces of bystanders as the emergency services mill around them, accompanied by the cascading chords of Albinoni’s 'Adagio in G Minor'. The music lasts a full 10 minutes and it sounds as if the whole universe is weeping. The director has been criticised for using the adagio because, as one of the 'greatest hits of classical music', it has been used in many other films. Yet it works perfectly here (as it does in Peter Weir’s 'Gallipoli') precisely because it is over the top.

Paradoxically, it makes the most shattering scene of the film more, not less, tolerable to watch. By acting as a kind of counterpoint to what is occurring onscreen, the adagio distances us a little, helps us take a wider view and thereby makes the scene more like a terrible memory than a hideous event that we are witnessing.

The truth about the Larchgrove scandal
CAFE