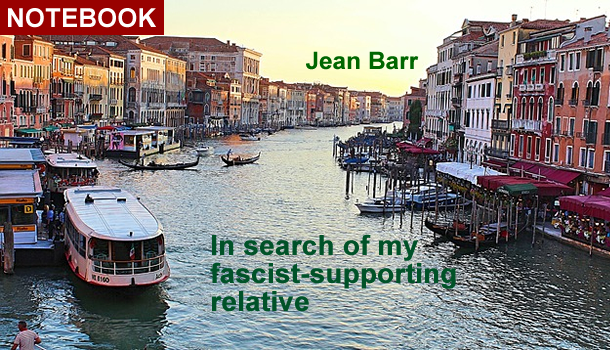 Zoe Williams writes in the Guardian about a recent escalation in sales of Hannah Arendt’s 1951 book 'The Origins of Totalitarianism'. Commentators have been referencing it since Trump’s election but significant numbers of the general public are now buying it. Arendt talks of 'pan movements' such as bolshevism and nazism that have a single explanation for everything: all that counts is the one big idea. Usually a creation of the Right, pan-ideologies are not unknown on the Left. Nevertheless, anyone who believes in pluralism or complexity has no currency on this terrain.

I read Williams’s piece after returning from Venice where I had been seeking traces of my great-great uncle Alexander Robertson. Born in Edinburgh in 1846, he became a United Presbyterian minister, lived and worked as a writer, journalist and minister in Italy for half a century, and was part of that great ideological struggle of the early 20th century between bolshevism and fascism. As the Scotsman’s correspondent in Italy and as an enthusiastic supporter of Mussolini, Alexander penned numerous articles praising the duce’s reforms, eventually publishing a biography, 'Mussolini and the New Italy'. Dedicated to Mussolini’s mother it was one of a dozen books he wrote on history, religion, art and travel.

To find an ancestor who sympathised with Italian fascism, hobnobbed with gentry and royalty (being decorated by two Italian kings), and even had a canto written about him by Ezra Pound (another fascist sympathiser) has been a disturbing experience. Alexander died in 1933, just before the fateful first meeting between Mussolini and Hitler at Sta near Venice. He is buried in Venice’s San Michele cemetery close to the grave of Ezra Pound whose first poetry collection he helped publish.

Whilst uncovering disquieting facts about my uncle in Venice, I was, too, encountering a city of shimmering light and shifting water and, unexpectedly, an artist uniquely able to capture that light and movement in glowing abstract paintings. A retrospective at the Peggy Guggenheim Collection in Venice, 'Tancredi: My Weapon Against the Atom Bomb is a Blade of Grass', brings together nearly 100 of the artist’s works.

Born in Feltre in 1927 Tancredi found a patron in Peggy Guggenheim and in Venice he found his inspiration. He decided that because 'space is curved' it was 'the point...as the smallest space the mind can contemplate' that could best convey his sense of a world forever turning. Tancredi’s 'points' coalesce into gorgeous swirling swathes reminiscent of the Byzantine mosaics in Venetian churches. 'Springtime' (1951, dated 1952) typifies the luminous images of this early period: a vibrating mass of evanescent dots darkening towards the centre that unites Tancredi’s inner experience of a turbulence with the outer loveliness of a city in perpetual motion. In 1964, gone from Venice, he drowned himself in the Tiber.

The exhibition, which ends on 13 March 2017, is a rare opportunity to see the work of an artist who is virtually unknown in Britain. It is also a timely reminder of what Hannah Arendt emphasised above all else in 'The Human Condition': every human life is the potential beginning of something completely new and different. It is this very plurality that makes us human.