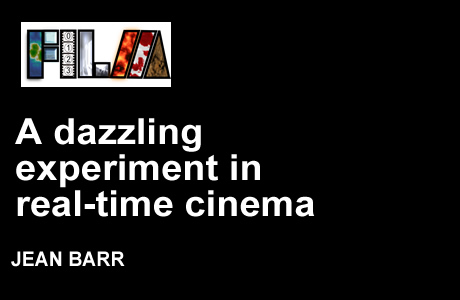 In his 1960 tale of an amateur gangster and his elfin-American girlfriend, 'A bout de souffle (breathless)', Jean–Luc Godard popularised the jump cut, defined in the Oxford Dictionary of Film Studies as 'an edit between two shots that feels abrupt or discontinuous’. The film, starring Jean-Paul Belmondo and Jean Seberg, is regarded as marking a revolution in film style, containing a large number of jump cuts intentionally to challenge the convention of continuity.

Viewed in this context, Schipper’s new film 'Victoria' may be seen as equally audacious. Like Jean-Luc’s film, 'Victoria' involves an amateur gangster and his foreign girlfriend. The difference is that 'Victoria' has no cuts – not a single one. From the moment 'Victoria' kicks off in a Berlin nightclub until it ends on Berlin’s deserted streets at dawn 138 minutes later, every inch of footage is edit-free.

Previous films have used visual sleight of hand to create the illusion of an uninterrupted shot. Alfred Hitchcock used the single take in his 1948 'Rope' but edited his 10-minute takes to simulate continuous action. Alejandro Iñárritu’s 2014 'Birdman' feigns as a single take one man’s slow motion existential breakdown. Before the digital era, one-take films were necessarily fabricated simply because of the size limitation of film reels.

Aleksandr Sokurov’s 2002 historical drama 'Russian Ark' does comprise a single unbroken shot, but within one building, the Winter Palace of St Petersburg’s Hermitage Museum. 'Victoria' is much more ambitious, covering 22 locations en route from a basement dive to rooftops and back down again, taking in a shoot-out, a robbery, and a chase on foot and by car. Shooting on the move in natural light, using music to vary texture and tone, Schipper and his crew, especially the agile cinematographer, Sturla Brandth-Grøvlen, who shot the 2015 'slow cinema’ Icelandic film, 'Rams', make it all look as easy as falling off a log.

In fact the director rehearsed and shot the entire film three times in real time, starting at 4.30am and shooting continuously for over two hours with 150 extras, six assistant directors and three sound crews. He then picked the best take. We never catch a glimpse of the military-style choreography this must have required. Combined with terrific performances by its young lead actors who improvise dialogue from a minimalist script of 10 pages, the end result earns its accolade as an 'engrossing exercise in creative swagger’. But it is much more than that.

'Victoria' tells the story of Victoria (Laia Costa), a young waitress from Madrid on a working trip to Berlin. A stalled piano prodigy taking time out abroad, she regularly clubs alone until 4am before starting her breakfast shift in a café. We first meet her as she dances alone to pulsing music in a strobe-lit underground club in central Berlin. As dawn approaches, she leaves to start work in the Mitte district. Production designer Uli Friedrichs cannily organises the tale’s geography around a condensed area of the city centre to ensure everything is within easy reach by foot or cab.

Victoria runs into Sonne (Frederick Lau) and his pals Boxer, Blinker and Fuss who want to show her the 'real Berlin’. She joins them on a rooftop for chat, drink and weed. Sonne takes a shine to her. He and Victoria do a lot of walking and talking. Since she is Spanish and he is German they communicate in broken English. Their conversation feels natural and intimate, especially when they retreat into the closed café that is her place of work. In the most magical moment of the film Victoria performs a brief Liszt piano recital for Sonne.

At this point, about one hour into the film, as proceedings seem to be winding down, Schipper abruptly ups the ante. The boys have urgent business to attend to and they need Victoria to be their driver. We are suddenly thrust into heist genre territory. As we know, things never go to plan in this genre. What we cannot know is how much Victoria and her relationship to her new friends will change over the next hour.

In a film with no cutaways to show people talking out of Victoria’s earshot, the language barrier between Victoria and her new German friends is ingenious. When she meets Sonne, they converse in English, but when secrets need to be discussed in front of her, he and his friends switch to German. We get the benefit of subtitles but Victoria remains oblivious, left out of key conversations to which the audience is privy. Such gaps in verbal understanding underline Victoria’s outsider status but Schipper doesn’t allow this to exonerate her subsequent actions. Instead, he makes her self-deception that everything is rosy despite contrary evidence a central theme of the narrative.

Victoria is a good girl on the cusp of turning bad. Film actors seldom have the space that theatre affords them to build a performance in real time, chronologically. One of the pleasures of 'Victoria' is watching Costa change from her hesitant earlier presence as lonely outsider into something much steelier and morally compromised. The effect is distinctly unsettling. Lau too is impressive as the reluctant Sonne whose loyalty to his foolhardy mates proves disastrous.

Shooting on grainy digital, Grøvlen tracks events and facial expressions with equal attention. In the absence of an editor his camera steers the pace and flow of the action, almost becoming a character in its own right, carefully circling Victoria and Sonne in intimate interior scenes, ceding to agitated hand-held panic when all hell lets loose. Nils Frahm’s score shifts register too, deftly veering from electronic dissonance to lyrical piano and cello, mirroring the shifting states of mind of the title character.

Schipper uses his limited time effectively to pace the action. But it is in its uneventful first half that 'Victoria' works best, managing to turn what could be a one-horse trick into a delicate and touching portrait of transnational loneliness and millennial rootlessness. The great accomplishment of 'Victoria' – a dazzling stylistic experiment – is that you stop wondering how it was done and instead just live with the characters. As Jonathan Romney observes, when Victoria finally emerges into a chilly Berlin morning we feel we have lived through the emotions of a lifetime with her. 'Real time’ in cinema has seldom been so cleverly stretched.

Next edition of the Scottish Review: 18 May 2016
Subscribe Today