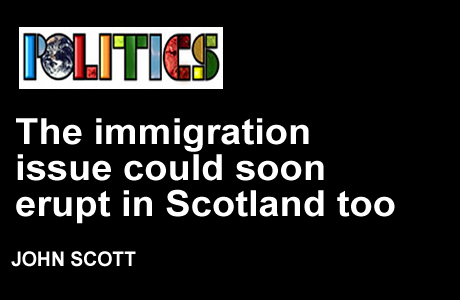 Around the end of the last century, journalists commenting on the USA started using a new phrase: 'Red and Blue states'. This phrase was coined to describe the way in which the country had become divided. In the US, Red meant Republican and Blue meant Democrat.

Divison is a natural part of democracy but, in the US, the division arising had certain alarming features. First, the two sides appeared almost equal in size. This was demonstrated in the near dead-heat of the 2000 presidential election. Second, and more importantly, the two sides appeared to ignore what they had in common if favour of emphasising their differences. This led each side to assume that they, and they alone, represented virtue while the other side represented only malevolence. Soon, routine parts of the political process, such as the appointment of senior judges, became political battlegrounds.

By 2016, there is little sign of this culture of political confrontation ending. As in Europe, immigration is part of this toxic mix. One point, not widely commented on, is that this division had come about without many Americans, perhaps a majority, being aware it was taking place.

When this polarisation was first being reported, Britain was a sea of contentment under the charismatic leadership of Tony Blair. (This is not a sarcastic comment. Though Scots were less bowled over than much of England, there was no doubting his popularity. Until last Thursday, it remained the Tory template for success.) He was ably abetted by a chancellor known, first and foremost, for his fiscal prudence and reluctance to increase public spending. Moderate consensual politics ruled unchallenged.

It is hardly surprising that the UK reaction was one of smugness and a belief that our political culture was – to put in crudely – superior. The idea the the UK had nearly identical fault lines would have been laughed out of court.

Fifteen years on, the division of England has become a cliche. It is seen as the driver of the Brexit vote. Those 'left behind' and, just as important, those afraid that they would soon be left behind, joined forces to ignore a tidal wave of warnings that leaving the EU would bring about plagues unseen since Old Testament times.

In the US, divisions included disputes about abortion and same-sex marriage, but the core division has been about economics and identity. In this, England is replicating the US experience. In England, there is a fatalism about the division. There is little talk of government action to improve education or employment opportunities for the disadvantaged. The Brexit campaign is based on cutting immigration as a means of protecting the disadvantaged from competition.

Do those who voted 'Leave' really believe that the era of very high immigration can be ended? Some no doubt do, but, for most, it is a howl of anguish: a demand that, for once, their voice should be heard. John Harris of the Guardian, the journalistic star of the referendum campaign, has noted that the desire to vote Leave was largely separate from campaigners such as Nigel Farage.

Where does Scotland fit into this? We are where the UK was at the start of the millennium; blithely assuming that we are protected from such a future. Except, we are not. Many of the fault lines in England are replicated in Scotland. The central one being 'left behind' Scotland. For now, this group is willing to give the SNP and Nicola Sturgeon the benefit of the doubt. This may not last.

It is not difficult to envisage a future where those 'left behind' feel betrayed by the SNP as they believe they were by Scottish Labour. Labour benefited from the long tail of tribal loyalty: 'I have to vote Labour because my dad/granny would turn in their grave if I didn't.' This prolonged the dominance of Labour in Scotland for at least a generation.

A Scotland where economic life becomes more, not less, precarious looks to be our short- to medium-term future. This is not what support for the SNP was intended to deliver. Future austerity would be likely to hit those who have avoided the worst of recent spending cuts. Pensioners and public sector professionals would take a bigger hit this time. If this came about, they would find a severe shortage of allies willing to fight their corner.

It would not take much for immigration to become the toxic issue it is in much of England and across much of Europe. A crisis in Govanhill might be enough. The idea that Scots do not suffer from the same fears and insecurities that have driven this issue in the north of England is fanciful.

Many commentators on the moderate left, in the Herald and Scotsman for example, view the last 30 years as a time of economic and social failure. The reality is far different. The percentage of the population which is notably comfortable has exanded hugely. The concern is that this extended prosperity is based on shallow foundations. It is sustained by a 10% budget deficit. And the 'left behind' in Scotland look set to remain left behind for as long as anybody can see.

The pleasure so many Scots are taking at the discomfiture of the UK establishment may soon prove misplaced.

John Scott is a retired teacher

HENRI DE RUITER
Anger won't help us now. But I am grateful to the Scottish peopler