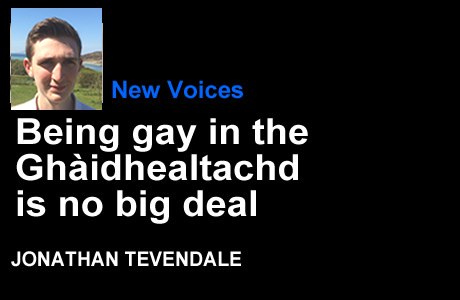 Life in the Scottish Highlands is so often perceived as one of three bleak components: isolation, desolation and discrimination. Existence 'North of North', beyond 'the great divide', is considered to be one of fundamental misery for all who dare to brave the wind-stripped, marshy hills.

Mentally and physically numbed by the wasteland outdoors, grey old men resort to throat-burning whisky in order to provoke something resembling 'feeling', or simply to drown their pain. And with austere landscapes comes austere morality: what better way to explain the fundamental wretchedness of life than God – no more severe than nature. Yet with faith comes the notion that the afterlife might be better than the present. Surely we suffer for a reason; surely there’s more to life than just sheep.

It is with this in mind that it becomes necessary to consider those in this world for whom religion is somewhat problematic: redemption is nice, but it does nothing for those of us who are thwarted from birth in our attempts to find contentment in the Lord. As a gay, this is the group of damned dissidents with whom I identify most; as a Highlander, I must conclude that this makes me the butt of the community’s implacable disgust towards those whose 'lifestyle' doesn’t meld with their belief set.

But this could not be further from the truth. In my experience, Highlanders have shed any past prejudice while managing to steer clear of the pink, frilly feather boa so stereotypically characteristic of the 21st-century pro-gay movement. In fact, coming out was such a colossal non-event that I’m still not really sure at what moment my closet doors actually made the monumental transition from 'closed' to 'open', or if they’ve made that transition at all.

At first, two people knew. They dutifully kept my secret for a few years before, in what can only be described as a progressively intensifying chain reaction, everyone else knew a few years later. Some heard from me, some didn’t. So why can’t I claim to be out? The reaction has been so minimal that it’s almost as if nobody knows, and some people still might not. My status? Unconfirmed; unconcerned. Not only have I avoided pitchforks and cries of 'degenerate', but any significant reaction at all.

But the passivity of my peers begs another question. Is this the right reaction? After years of suppression, emotional anguish and abnormally high suicide rates, do the gays of this world deserve more than a shrug of the shoulders and eventual change of conversation? The answer is no. Anything else would do a disservice to the meaninglessness of homosexuality. It’s not a culture to be lauded; it’s a natural state of being.

Attributing homosexuality any greater meaning than as an alternate sexuality simply perpetuates the stigma surrounding it – a loud movement provokes a loud response. For those who build up a cloud of meaning around their sexuality, torture themselves about it or resort to denial as a means of escapism, any experience similar to mine must be underwhelming and anticlimactic. I’m lucky not to be one of those people. When something so important in your own mind is so visibly insignificant to others, it’s hard not to be a little miffed.

But it is the right response, and the fact that people in such a previously hostile area have, subconsciously or otherwise, grasped this is as impressive as it is correct. Not long ago, the Free Church was chaining up swings on a Sunday, presumably to shield the naive youth from the spiritual dangers of gravitationally induced fun. But now, not only on the same planet but in the same geographical region, people (some religious) don’t think twice about minority sexualities; being gay has become as inconsequential as drunken fishermen, or rain and midgies.

I’d love to attribute this change in attitudes to some glorious revolution within the Highlands, some movement for progress, but the last area of 'true wilderness’ in the British Isles is no longer as wild as people seem to think it is. When shocked tourists excitedly photographed my sister and I in a blow-up swimming pool as children, asking, 'Where did you get that? How did you get that?' they seemed equally as stunned by the truthful answer: 'Tesco'. Truthfully, very few places in the world are isolated any more; if you want true ignorance and isolation you’ll have more luck in Kansas than around the Cuillins.

The internet (yes, we have that) has connected even the most isolated to the accepting ways of 'Greater Civilisation'. It’s hard to turn on the television without being met by gay chat show hosts (you know who they are), or to read the news without another Scottish party leader revealing their 'non-heterosexuality'. The same movement which has brought us emojis, instant entertainment and the notorious twerk has also seemed to provoke an almost universal nonchalance towards homosexuality.

This is a story of cultural assimilation and the Highlands of Scotland are no longer shielded from the effects of a rapidly changing world. To be remote only means to be so physically, as the technology turns us into an amorphous whole entirely dissimilar to the generations preceding us. So whilst the wind-stripped, marshy hills are the same ones as existed twenty, fifty or even one hundred years ago, the people who gaze upon them are entirely different. While hair clings to the scalps of grey, old men in much the same manner as it did before, it’s becoming increasingly difficult to cling to the bigotry of the past as technology unifies the world in its indifference towards the veritable insignificance of being gay.