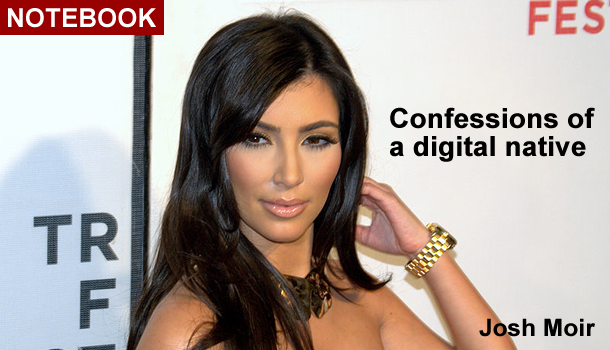 I think I live in the last generation who remember what life was like before the internet. I remember the difficulty in trying to arrange meetings between groups of friends, which somehow happened even without the magic of group chats and Facebook. We were some sort of childish hive-mind; everyone somehow managed to work out where to go, and roughly at what time.

I straddle the timeline of pre- and post-internet life. We got our first computer when I was 12 and I was immediately obsessed. I remember constantly begging my mother to install 30-day free trials from AOL, and cancelling them on the 29th day, because the internet was a toy, not a necessity.

I grew up online; my adolescent teenage embarrassing existence chronicled through LiveJournal and MySpace and as I matured, so did this new exciting world of media. The internet found acceptance, found its voice and now has evolved into something we could have never imagined back when Connie advising us that 'You have Mail' was an excitement we had never known before.

But with the progression of online media a healthy scepticism grew within me. I had been publishing information on the internet, and I knew how easy it would be to publish lies. The internet was, at its heart, an anonymous forum where everyone's opinion held the same currency. I believe it is one of the charming things about the World Wide Web. We see humanity laid bare, with its astonishing acts of kindness, and seemingly unimaginable depravity weighing on the cosmic scale.

But not everyone holds the same belief.

People who don't have my generation’s experience of the internet expect it to follow in the paradigm that media followed before. Opinions were packaged and delivered, having been considered for weeks, maybe even years. The ability of immediate publication was a far off dream and as such, new information that presented itself could be assimilated into the whole before release, giving the impression of tidy events with clearly designated root causes and outcomes. It was this trust in the ideals of reporting which made H G Wells’s 'War of the Worlds' possible.

Now, in a world where we can see people unknowingly sacked from their jobs while flying across countries, or politics stories unravel in real time on twitter, 'old media' doesn't have the same impact. We want stimulation, and we want it now. The Old School has had to change and is now doomed; trying to compete in a market it doesn't understand.

Instead we have the rise of 'fake news', 'alternative facts' and 'clickbait journalism' which have caused such outrage in the traditional media of late, compounded by the fact that their recent track record in predictions has been more Nostra-damning than clairvoyant. The news outlets beg us to trust them to provide insight in a world which they are struggling to understand. They know the reasons behind the Brexit chaos and Trump's win, even if they were foregone conclusions to the contrary just months ago.

We have lost the place for considered, insightful and investigative journalism and instead a caps-lock maniac desperate for advertising revenue and product conversions ensures me that YOU'LL NEVER BELIEVE WHAT AMAZING NEW PRODUCT KIM KARDASHIAN TRIED LIVE ON AIR.

It's enough for me to long for the days of the hive-mind.

Lighthouse: in praise of cats