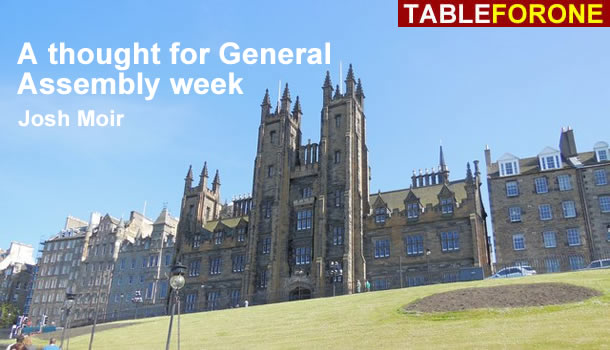 I seem unable to stop thinking about the past recently. Whether it's technological strides forward or bizarre political situations, I seem to be constantly comparing the situations of the day with my rosy recollections of the past. Today however I'm trying to tell myself that today is the best day to consider the future of organised religion in Scotland, and that my recent focus on the halcyon days of my past is a desperate need to understand the present, rather than the more obvious existential crisis of approaching 'the big three oh'.

The media has adopted its default hysterical tone when talking about a crisis in Christianity. I can't help but ask myself, is Christianity really in crisis, or is the decline in attendance symptomatic of a broader change across society?

The figures give a bleak outlook for the future of the Church of Scotland, which is holding its annual General Assembly this week in Edinburgh. Attendance has halved over the last 30 years. Maybe my upcoming big birthday has more to do with my interest in this than I thought.

In truth I don't think it's as easy as that. I led what I like to think was a relatively standard Scottish upbringing for a child of my generation. My parents were never overtly religious and I learned what I knew about Christianity through the religious services that were held in my non-denominational primary school. Once a year we would go to the local church for a service, normally at Easter. This upbringing mirrors most of the people my age. Religious instruction was only given if your family sought it out, either through the church they were already involved in, or by fighting for a place in the local Catholic primary school with their lower class sizes and fancy trips.

This Christianity for dummies crash course left me with a passable knowledge of the big themes but with no real connection to them in my day to day life. I was much more interested in learning about the stories the ancient Greeks and Vikings told, rather than what Jesus had to say.

I also didn't feel any need to connect with the church as I matured. The public relations nightmare that the Church of Scotland has endured over the last few decades had me throwing many a curled lip and disgusted side-eye in their direction. As society was becoming more liberal than ever before, passing equality legislation and civil partnerships, the church was wailing like a man possessed by something darker than the holy ghost over gay clergy. Many late-night meetings and councils were held to discuss something which would, in any other sphere of public life, be the wrongful dismissal suit many a lawyer could only dream of.

The church dragged its feet about coming into the present, and I feel like the youth of Scotland have been watching. Through sex abuse cases and seemingly being at odds against the steady rise of liberalism the church has screamed from the battlements that it is the last bastion of morality, but its actions sound louder still. It seems to many, myself included, that the morality the church defends is outdated and doesn't reflect how we understand morality today, and that it may have even sown the seeds of its own demise.