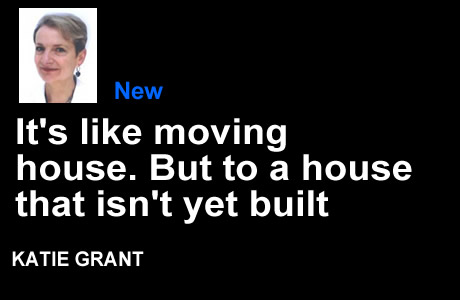 In June 1789, as the French revolution gathered pace, Georgiana, Duchess of Devonshire, was besieged in her Paris hotel. Her besiegers were not the revolutionary mob, but city tradesmen. 'I am overwhelmed by stay-makers,' she wrote, her letters full of visits to the opera and all manner of sociability. Fitting stays into dresses may be a task for re-enactors these days but most of us experience constitutional turmoil through the hum of domesticity.

As leaders rise and fall, we empty washing machines, commute to work, push supermarket trolleys, watch the football/tennis/cricket and wonder if we need umbrellas. If memory serves me right, one of the Anglo-Saxon Chronicles marks 1066 with the entry 'not much happened this year’. The truth, for most of us, is that during and post Brexit, life will bump on, our personal successes and disasters looming larger on our radar than constitutional and financial machinations. Stock market up, stock market down, price of gold up, price of gold down, promises made, promises broken: these will, unless they directly affect your weekly income, matter less than the immediate drama of the roof leaking or the car refusing to start.

But something has changed. When it rained on my washing this morning, my temper was shorter – a clear indication of anxiety. Last Friday, on the train to Edinburgh, I smiled at people speaking foreign languages to show they were welcome. Stupid, I know. Once inside, the washing dried perfectly happily. God knows what the people I smiled at thought I was smiling about. I simply cling to what I felt and what I did because my feelings and actions are within my control and after Friday morning, nothing else seems to be.

Events pile thickly one on the other: resignations; speeches; numbers; what can happen; what can’t happen; and whoops, what is happening. Commentators grasp this angle and that angle, their commentary, in the main, of only passing value since there are so many angles, each angle contingent on another, to say nothing of the angles that haven’t yet hoved into view. It’s like moving house. Worse, it’s like moving into a house that isn’t yet built. You’re talking about where the beds should go, forgetting that beds need floors, so you talk about floors, forgetting you can’t lay floors without walls, so you talk about walls, forgetting you can’t build walls without a roof, yet beds are important, so you find yourself talking about beds again. In other words, there are so many aspects to Brexit, where the hell do you start?

And then I realise that this far from comprehensive list is still only looking at things from a UK angle. What do the other EU member states think? What will they do? I abandon lists in the face of one huge truth: Europe’s problems won’t pause for Brexit and nor will the world’s. Whilst we’re drowning in the dreary and selfish minutiae of extrication, the Middle East will continue its dire conflagration, the US to turn inwards and Russia to stare balefully over its borders. Perhaps the Brexiteers are right, that we can paddle our own canoe but a canoe ain’t much cop against freighters.

Here, though, for what they’re worth, are my current thoughts. I won’t call them certainties because I’m clean out of certainties. I’m reverting to lists because though they’re unsatisfactory, they’re all I’ve got:

1. That whilst for Britain good as well as bad will come from leaving the EU, we’ve damaged something we should have been trying to improve;
2. That our children, who care about Europe as a whole, are very unhappy;
3. That despite all the promises made, Britain isn’t going to be 'greater’, whatever that means;
4. That in Scotland, if indyref2 involves accepting the euro, that will be a major problem, so we’re between the proverbial rock and hard place;
5. That the law of unintended consequences will prevail.

'We are frightened tonight,' Georgiana eventually wrote from her hotel. '…all is license and confusion.' I don’t know what she’d have made of today’s confusions but I feel she’d be glad of her stays.