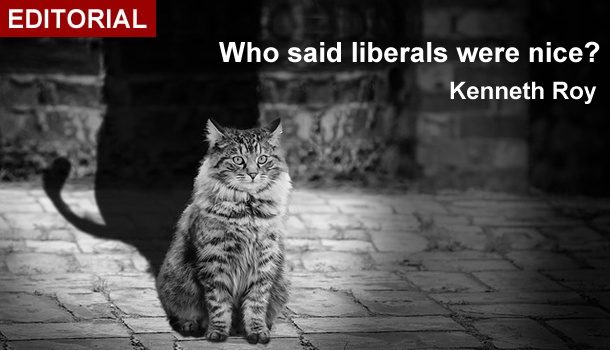 Yasmin Alibhai-Brown, who is something of an authority on liberals, being a prominent one herself, brings us a New Year message from the deep trenches of the middle way: it is time that liberals stopped being nice.

Yasmin’s niceness during 2016 was rewarded by the usual foul abuse on social media. She was hounded for her views on such matters as Ukip
(against, as you would expect) and Remain (just as emphatically for; no surprises there either). ‘Sometimes’, she adds, ‘you just want to give up – but that would be giving in’. So poor Yasmin soldiers on, a virtuous presence on many a broadcasting sofa and op-ed page, propagating the unfashionable cause of sweet reason.

But no more. ‘We must find fortitude, passion and moral courage’, she trumpets. ‘This is no time for humility and niceness’. She has found an unlikely ally in Matthew D’Ancona – Dankers as he is known to his friends – who has undergone a weird metamorphosis from Sunday Torygraph political
columnist to a regular berth in that spiritual home of the British liberal, the Guardian. At the end of a perplexing year for Guardian readers, D’Ancona mused that ‘soft liberalism doesn’t cut it any more. Time to try the hard
variety’.

Here, however, is a small oddity. Until Yasmin Alibhai-Brown and Matthew D’Ancona pointed it out, I had never thought of liberals as characteristically nice. On the contrary, they were once defined as people who fire their staff at Christmas. That is manifestly unfair. They are not all shits. Some of my best pals are even members of the only British political party with the word ‘Liberal’ in it. But nor, I fear, do liberals enjoy a prerogative of niceness.

In my long experience, though I admit it’s largely a temperamental preference, you’re better off with the hard left. I am thinking here of such people as Jimmy Reid and Mick McGahey, both of whom were more congenial and interesting than your average liberal. And if not the hard left, then I’d settle for such aristo Tories as Alec Home and that lovely man Alick Buchanan Smith, who died far too young. You knew where you were with these people. With the liberal, you can never be quite sure.

When I think of a quintessential liberal, my mind conjures up David Steel looking down at me imperiously from a horse – well, that’s going back a bit – or, more recently, the familiar features of Baroness (as we must now learn to call her) Chakrabarti, with whom I once shared a public platform. On the basis of that single encounter, ‘nice’ is not a word I would readily apply to the former director of Liberty (the charity, not the high-end department store). She struck me as someone fuelled by a certainty in the correctness of her own opinions.

My old friends on the hard left were fuelled by certainty too, ideological in their case, but it was invariably softened by whisky, good gossip and conviviality – properties that, again, I wouldn’t necessarily associate with Baroness Chakrabarti and her extensive ilk. As in politics, so in journalism: the most miserable year of my non-career was spent among the unappealing egos at the Observer, all of whom loved the human race. It was people they couldn’t stand.

Despite these reservations, I sort of see where Yasmin and Dankers are coming from at the beginning of what promises to be a second successive deeply unpleasant year. Among the many hurdles to be overcome – or, more likely, not overcome – is the Dutch general election in March and the prospect of Geert Wilders as the country’s new prime minister.

In gloomy anticipation, the Guardian recently ran a story headed:

I was unaware of Wilders’s criminal guilt and wondered idly what bank he might have robbed or how many old ladies he had defrauded on his way to the top. The truth was less exciting. A three-member judicial panel decided that he had violated a law on inciting discrimination when he led a crowd at a political rally in The Hague chanting ‘Fewer, fewer’ to the question, ‘Do you want more or fewer Moroccans in this city and in the Netherlands?’. It decided, however, that he had not actually incited hatred and imposed no punishment, rejecting the prosecutors’ request to fine him 5,000 euros.

Criminal guilt? Only in the narrowest technical sense; and not at all what the headline was presumably intended to convey. The ill-advised prosecution had an unforeseen consequence: it increased the poll ratings of the man in the dock.

would have been closer to the actuality.

Was this, perhaps, an early example of the new, not-nice, hard-nut liberalism favoured by Dankers? Was it a first brave attempt to cultivate the ‘fortitude, passion and moral courage’ that Yasmin feels will be necessary to counter the forces of darkness? Or was it just a bit silly?

This crusade already looks doomed to fail. It starts from a mistaken assumption. Whoever said that liberals were humble? Whoever said that
liberals were nice? You could more convincingly argue that it was their lack of humility, their want of niceness, that helped to create the popular demand for the various nightmarish alternatives.

And the Band played on
ALASDAIR MCKILLOP

Pull the other one
ANTHONY SEATON