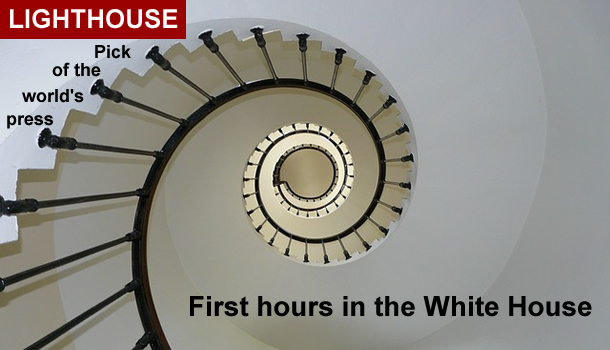 How does the handover of power in Washington work? Time magazine asked a number of Obama staffers. Dan Pfeiffer, former senior adviser to the
president, explained: ‘You get on a bus and they take you to the White House. They drop you off, and someone shows you your office. You walk in and there’s a computer there with a Post-it note with your password, and you’re in charge of the government. Full stop’.

Jen Psaki, the communications director, said that no-one knew where the bathroom was; she didn’t know there was one on the first floor until the second year she was there. Lisa Brown, former staff secretary, remembered the president accidentally walking into her office on day two because he didn’t know his way around.

Brian Deese, another of Obama’s advisers, said that for the first couple of days he was ‘literally squatting in a hallway in the second floor of the West Wing’. His colleague Valerie Jarrett found that they didn’t have laptops, iPads or iPhones and ‘if you brought in your own equipment, you couldn’t use it. I really did think the building would be state-of-the-art, and it was not’. Macon Phillips, former director of digital strategy, described the set-up as ‘like a time machine back to sort of a pre-social media moment’.

Everyone surveyed by Time agreed on the steepness of the learning curve.
Pfeiffer said the most important piece of advice he would give to anyone entering the White House after serving on a winning presidential campaign is that ‘you’re not as smart as you think you are’.

Following the president-elect’s combative press conference, Mark Corallo defines ‘the genius of Donald Trump’ for the conservative journal American Spectator. Corallo writes that Trump doesn’t assume that the press is even attempting to be fair to him, so he doesn’t validate their credibility by trying to win them over.

‘Trump seems to understand he has no obligation to kowtow to the D.C. establishment media out of fear they’ll make trouble for his presidency. He knows they don’t accept the results of the election and are going to do everything they can to delegitimise his authority. Thus to CNN, “No, I’m not going to give you a question. You’re fake news.” If the establishment has a temper tantrum, so be it’.

Corallo predicts that the American press corps will quickly learn that things are going to be different. The ‘mutual lovefest’ that most of them had with the Obama White House and the Clinton campaign is over: ‘There’s no underlying assumption that the press corps is automatically worthy of respect’. 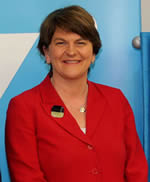 Dawn Foster, in a blog for the London Review of Books, takes a dim view of the attempt by her namesake, Northern Ireland’s first minister, Arlene Foster, to blame her present troubles on sexism. Sexism is a real and present problem for women in the public eye, she writes, ‘but Foster has substantial accusations levelled against her, and attempting to smear political rivals as misogynist when the questions are coming from politicians on all sides does little to convince the public she has nothing to hide. The first minister seems to have been under the impression that by accusing her political opponents of sexism, she’d not only stifle their criticism but also get sympathy and support from women: the opposite has happened. If your daily life is made worse by sexism, seeing a powerful woman use it for political opportunism isn’t heartening, it’s infuriating’. 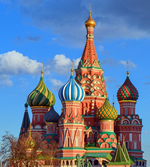 The authoritarian state is pressing ahead with the destruction of society in Russia, say the editors of the Berlin-based international journal Osteuropa. 'Almost 150 clubs, associations, centres, movements and institutes across the country have been hit by the slander campaign intended to silence institutions that have fallen out of favour. They are defamed by the Ministry of Justice as "foreign agents" – in other words spies – and, through fines and threats of imprisonment, are pressured into acknowledging this stigmatisation by placing themselves on a register of agents. Now, with the inclusion of the Levada Centre and Memorial International, the repressive state has sent out a new signal: international renown no longer serves to
protect. The aim is to spread fear’.

Governments which introduce bans on clothing are sending a signal about their own lack of confidence, says an editorial in the current edition of Index on Censorship. ‘If you have to introduce laws telling your citizens that they are banned from wearing purple, sporting red velvet, or showing their knees, then, frankly, you are in trouble’, writes Rachael Jolley. ‘But again and again, when times get tough or leaders think they should be, governments tell their people what to wear, or more often, what not to wear’.

Why any government thinks this is going to improve their power, the economy or put their country on a better footing is a mystery, says Jolley. ‘History suggests you never strike up a more profitable relationship with your people by removing the freedom to wear specific types of clothing or, conversely, telling everyone that they have to wear the same thing’.

She notes that in Iran, where rules about ‘modest’ dress are enforced viciously with beatings, sales of glitzy high heels are going through the roof: ‘No one can stop those women showing the world their personal style in any way they can’.

The editorial quotes Iranian model and designer Tala Raassi, who grew up in Iran, commenting on the recent burkini ban in France. Raassi had written of her disappointment that a democratic country would force an individual to put on or take off a piece of clothing. ‘Freedom’, said Raassi, ‘is not about the amount of clothing you put on or take off, but about having the choice to do so’.