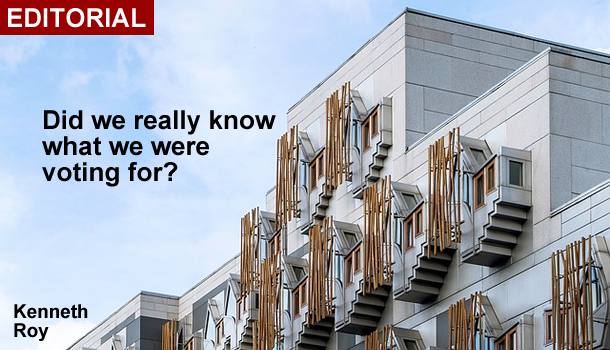 At the inaugural meeting of the Scottish Constitutional Convention on 31 March 1989, its founding chair Kenyon Wright delivered a messianic address: ‘There will be no turning back. We will find a way. The forces against us will be strong, the way ahead will be difficult and even dangerous, but we will go on. For what is at stake is the real life of our nation and the values of our community. The stakes are high, but the truth will prevail’.

There was a feeling in the Assembly Hall, Edinburgh, of a dignified, even solemn occasion. The atmosphere was enhanced by the opening prayer (without which no Scottish ritual of importance seemed to be complete) and by Kenyon’s invocation of a Biblical word – Kairos in Greek – meaning a time: not just any old time, but one ripe with promise.

‘We are at Kairos’, he said gravely. ‘A time for Scotland’.

The time did drag a bit. George Robertson complained that four hours of debate, without a tea break, was too much. ‘Who says Calvinism is dead?’, he mused. A reporter from a Japanese newspaper, overwhelmed by Scottish tenacity, nodded off.

One of the more alert journalists, Murray Ritchie, noted the politically ecumenical spirit of the meeting and the absence of splits. ‘Things’, he wrote, ‘looked ominously constructive’. Chairing duties were shared by Labour’s Harry Ewing (‘the Leven postman’ as he was sometimes affectionately described) and the ubiquitous David Steel.

Since blood on the carpet there was none, the media distracted themselves with matters of incidental interest: the smart striped suit of Brian Wilson, a convert to the devolutionist cause from his implacable opposition a decade or so before; Menzies Campbell with his permanent air of gravitas, ‘sitting on the floor at the feet of Donald Dewar’ with as much gravitas as that humble posture allowed; and the grouse of the Green Party that no creche had been provided – the nearest thing to a row all day.

The Conservatives had boycotted the convention, as belatedly had the SNP on the grounds of alleged Labour domination. For grapeshot – the whiff of which gladdened every journalist’s heart – it was necessary to leave the hall and hit the phones. ‘This is a devolution convention’, sneered SNP leader Gordon Wilson. ‘It is rigged so that the Scottish people are given no choice between the options for Scotland’s future’.

But was it? Or, looking at the event in hindsight, were appearances more than a little deceptive? Donald Dewar had recently championed ‘independence in the United Kingdom’ without explaining what it meant.
‘A notion which is surely ridiculous’, wrote Murray Ritchie. ‘Trying to steal the SNP’s clothes and even vocabulary when its back is turned is fair political game, but inventing an impossible political illusion is disingenuous to the point of absurdity’.

In his speech, Kenyon Wright had only partially succeeded in defining the convention’s ultimate objective: ‘What we do here today is no narrow nationalism. We have no interest in a little Scotland’. But might he – and some others in the room – have had an interest in an independent Scotland somewhat larger in vision than ‘little’?

In March 2012, in the formative stages of the referendum campaign, Kenyon wrote an impassioned piece for this magazine – he headed it ‘an appeal to all Scots of all parties and none’ – in which he pleaded for a two question referendum, giving home rule short of independence as an alternative option. I assumed at the time that he himself was in favour of that alternative (a reasonable enough assumption considering that he had stood for the Liberals in the first elections to the Scottish parliament).

But by the summer of 2014, as the campaign entered its closing stages, he made a dramatic intervention in support of Alex Salmond, claiming that he had always seen the work of the Scottish Constitutional Convention as a stepping stone to independence. Surprised by this acknowledgement, I invited him to confirm it. ‘We signed up to the devolution project’, I wrote bluntly. ‘Were we not misled?’

In a considered reply, Kenyon stated that the word ‘devolution’ was conspicuous by its absence from the convention’s reports; ‘devolution’ had been Westminster’s word ‘which we were compelled to accept’. He reminded me that the convention had been ‘adamant that the powers of the Scottish parliament, once established, must be entrenched so that they cannot be altered without the consent of the parliament representing the people of Scotland’.

‘Does that sound like devolution’? he asked rhetorically. Whatever it was, it became clear that under the UK constitution it could not be done: the ‘absolutism of the British state’, as Kenyon called it, made such an entrenchment of powers impossible.

I stuck a rather crude headline over the piece: ‘It was never about devolution, by Kenyon Wright’. Kenyon was unhappy about this. It seemed to him to be over-simplifying the situation. Maybe it was. Nevertheless, there must have been many in the Assembly Hall on 31 March 1989 who genuinely believed that a devolved Scottish parliament was as far as the project should and would have gone; and many outside the hall who shared that view. Didn’t someone say something about a ‘settled will’? In the week of Kenyon Wright’s funeral – which coincides with Theresa May’s prescription for a possible point of constitutional no-return – that will feels less settled than ever.

We are left with a question and a paradox. The question is whether, if there had been clarity at the outset, the result of the 1997 referendum clearing the way for a devolved parliament might have been different. The paradox is that the man who did more than anyone to bring about that parliament was philosophically opposed to devolution.