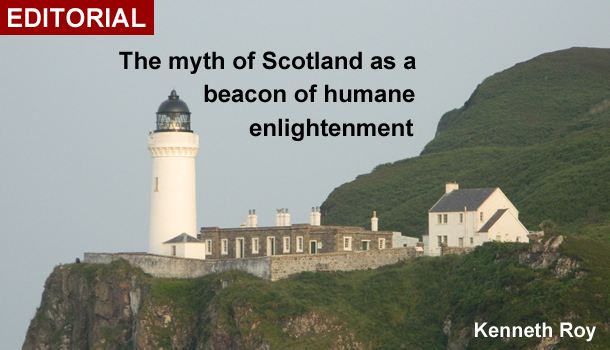 Lord Mackay of Clashfern should need no introduction to older readers. Although he was not a member of the Conservative Party at the time, he was parachuted into Margaret Thatcher’s government as Lord Advocate because the only other candidate for the job – the sleazy Nicholas Fairbairn – was unfit for high office. (Thatcher nevertheless gave Fairbairn the consolation prize of Solicitor-General, which enabled his political career to end in the inevitable disgrace.)

With Fairbairn relegated to the No 2 job, it fell to that Christian chap, Lord Mackay of Clashfern, to defend the indefensible: the continuing use of corporal punishment in Scottish schools in an important test case before a panel of European judges in Strasbourg.

A majority of Scots favoured the belting of children, the teachers’ unions favoured it, the low press favoured it. Mackay himself thought well of the practice, claiming that most Scottish children preferred a belting to the various non-violent alternative sanctions on offer. This was the nature of society in a small country on the edge of Europe as recently as 1981. Incredible as it may seem to us now, this was the state of intelligent opinion.

The case ended badly for Mackay and in humiliation for Scotland. The panel of European judges had arranged for specimens of the regulation tawse (made in Lochgelly, Fife) to be flown to Strasbourg for examination and were apparently taken aback by its severity. They unanimously found that the two mothers who brought the test case were justified in their philosophical objections to the belt being inflicted on their children (or anyone else’s). It was the beginning of the end of corporal punishment in Scottish schools, but we ought to remember – today of all days – that we had to be shamed into it by Europe.

That is one reason, among others, why Nicola Sturgeon’s definition of Scottish moral distinctiveness – her suggestion in yesterday’s interview with the BBC that the Scots wish to live in a different society than the one being created by ironlady2 in her green tartan suit – should be regarded with a dose of healthy scepticism. It is, after all, scarcely more than a generation since we went to extraordinary lengths to perpetuate the exercise of barbaric discipline in our schools.

But that was then: the day before yesterday; always a day best forgotten. There is perhaps a general assumption that the authoritarianism once bred in the Scottish bone has somehow been softened by the experience of running most of our own affairs for the last 18 years and by more civilised social attitudes in general. If that is indeed the assumption, it could be a dangerous one.

How wonderful it would be to climb on that high moral ground occupied by the first minister and admire the pleasing vista of the new Scotland, the one ready to take its place in the pantheon of European nations, assuming that we have much of a pantheon left at the end of this year. But here in the gutter, where journalists habitually scurry, there isn’t much sign of this new Scotland. To borrow from current usage, I ‘struggle’ to find it.

The authoritarianism hasn’t gone away; it has simply adopted new forms. We no longer belt infants, for example. In keeping with the spirit of the surveillance state, we would rather monitor them closely at every stage of their development to adulthood, appointing a state guardian to watch over them. I have not forgotten the look of disbelief on David Dimbleby’s face when this sinister brainchild of the Scottish government was explained to him at the start of ‘Question Time’ one evening last year.

And yet the bench of Scottish judges saw nothing exceptionable about the plan, disgracefully dismissing principled objections as grandstanding. Again, in an unsettling reprise of the corporal punishment fiasco, it took a higher court outside Scotland – the UK Supreme Court in this case – to expose the folly and send the Scots home to think again. The state guardian scheme has since been consigned to the long grass, where all the bad decisions are sent before being released back into the community.

But the Scottish judges: they carry on regardless. Without political or media scrutiny, they have taken to imposing ludicrously – indeed historically – long sentences for murder, removing incentive from the most serious offenders, destroying any hope of rehabilitation. The low press love it, of course, though it would be a pity if the new Scotland were to be administered according to the wishes of these atavists from the suburbs. Someone needs to question the wisdom of the new sadistic sentencing policy. No-one does.

I watched with fascination the exchange between Nicola Sturgeon and Brian Taylor on indyref2. Mr Taylor asked her if a second referendum was now ‘all but inevitable’. The obvious answer from the first minister, in all the circumstances, would have been a simple ‘Yes’. But somehow she couldn’t quite utter the word. She hesitated for a few seconds, mumbled, and then said: ‘I think that is very likely the case’. Not quite the rallying call one might have expected from a leader who shares with most of the rest of us a repugnance for the direction of UK policy.

Yet you can’t blame the first minister for being a tad cautious, even at this ultimate moment. The Scotland she will lead into full nationhood, if she wins the second referendum, will be one of the loneliest places in the civilised world – cut off from the remainder of the UK, with no hope of a fast track into the EU, and viewed with suspicion by the new bully boy in the White House. What a test it promises to be for all the bravehearts: and for some of us, a vicariously thrilling experience.

I just hope – it doesn't seem much to ask – that this lonely place called Scotland is not based on a fundamental illusion: the illusion that it is somehow a beacon of humane enlightenment in a hostile world. As past and present experience has shown, the view from the first minister’s summit is essentially a selective one.