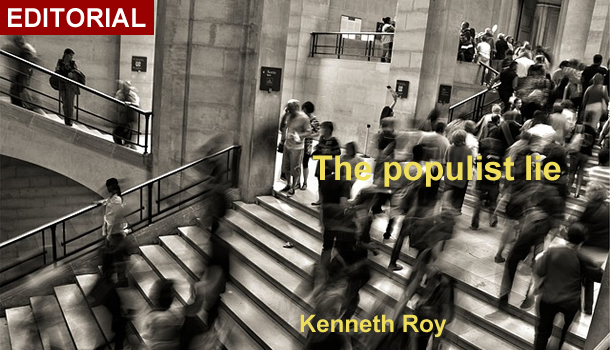 Is every weekend for the next four years going to be like this? Or might it actually get worse – very much worse? Best, perhaps, in the interests of sanity, to take one thing at a time.

We’ll ignore the reported desire of the new president to play a round of golf with our 90-year-old monarch as part of the lavish state visit he proposes to demand in return for some squalid trade deal. Theresa May – 'My Maggie' – can deal with such delicate matters of etiquette next Friday. Instead let’s hold our noses and return to the speech.

One paragraph in that profoundly disturbing rant stands out: 'The forgotten men and women of this country will be forgotten no longer. Everyone is listening to you now. You came by the tens of millions to become part of a historic movement the likes of which the world has never seen before'.

His press secretary, when he was threatening to hold the American media to account for publishing the truth about the size of the crowd at the inauguration ceremony, also alluded to this historic 'movement'. He called it 'incredible' and instructed the media to rally behind it. (There was an implicit 'or else' somewhere in there.)

I agree. It is incredible. Incredible, because – as I am about to demonstrate – it doesn’t exist.

POTUS, who is big on emotion, is hostile to facts. One of his buddies in the far-right alternative media said the other day that facts no longer exist. Alarmingly, he could be right. But so long as freedom of expression is still permitted, the press has a duty to remind the children of America, by salient example, what facts used to look like.

Assembling the facts of the 2016 presidential election hasn’t been easy. You may read several different versions of the outcome and obtain several different results. The confusion seems to be mainly due to the glacial pace of counting and verification. It’s a process which in our own dear Sunderland takes no more than 50 minutes. Even the Western Isles at its most relaxed used to return a member to parliament within a couple of days of the polls closing. But in Deadwood County, they like to make a meal of it. Many meals.

Finally, however, I am able to present a rarely seen work: a summary of the 2016 popular vote. It may even be approximately correct.

From this, we see that the loser is ahead of the winner by almost three million votes. Fake news? Or all too true – an electoral aberration, a freak? Whatever it is, it doesn’t feel like 'a historic movement the likes of which the world has never seen before'. The disparity in the popular vote is almost unprecedented and, what’s more, the oft-repeated claim that the loser was an unpopular candidate is disproven by the fact – one of the last before facts were abolished – that she polled only 72,000 votes fewer than her Democratic predecessor in 2012.

But these headline figures disguise another, er, fact – I’m pushing my luck but here goes – the comparatively little-noticed fact – sorry, I can’t help myself – that only 58.6% of the electorate actually voted. Although this was low by the standards of most developed nations, POTUS claims that his country is in a state of crime-ridden post-industrial carnage – so maybe America no longer qualifies as a developed nation.

I have done a little simple arithmetic – what they call these days 'the math' – and discovered that, as POTUS polled only 62 million out of a possible 232 million, his historic movement, the likes of which the world has never seen before, amounts to 27% of those eligible to vote. There is another way of expressing this. The incredible movement is either actively opposed by, or of no interest to, 73% of the electorate. For some reason you don’t see this reported much.

Over here, we have had a similar experience with the well-obscured populist lie. When Mrs May talked recently of Britain having decided in the EU referendum to 'embrace the world', she surprised many of us who sincerely believed that Britain – or, rather, England – had decided not to embrace the world but to keep johnny foreigner out and pull up the drawbridge.

In more moderate terms than POTUS, the prime minister too has been championing 'ordinary' people – i.e. the sensible ones who voted leave. Not quite an incredible movement the likes of which the world has never seen before, but getting there. It condemns the few of us who voted remain or didn't vote at all – only 29 million – to membership of an arrogant, tax-dodging, metropolitan elite.

But how many 'ordinary' people – almost invariably in 'hard-working families' – does Mrs May think she has at her disposal? How big is her mandate for 'embracing the world'? Again, it is instructive to bring a calculator to the stats. Populism fared rather better in Britain last June than it did in America six months later: the great dictator managed to recruit only 27% to his 'movement', whereas the deceitful Johnson and his erstwhile chum, little Gove, persuaded 37% to back theirs.

If this is the best populism can achieve on both sides of the Atlantic, despite the mega bucks being thrown at the project by super-rich nasties, there may be hope for the world after all.

But that’s not a fact. It’s just whistling in the gathering dark.