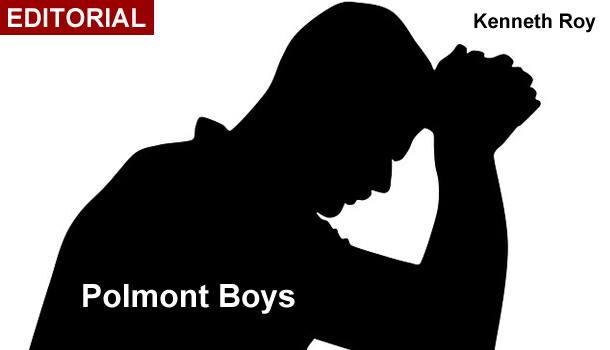 I
Two inmates of Polmont young offenders institution have died within a
few days of each other. They were Liam Kerr, 19, after an 'incident'
of an undisclosed nature, and Robert Wagstaff, 18. Both were sentenced
last year in the same sheriff court (Paisley).

Did they know each other? Were their deaths connected in some way? We can do no more than speculate. How did they die? Again we have not been told. What crimes had they committed? The authorities aren’t saying and neither case crops up on an internet trawl.

The details are not so much sketchy as almost non-existent. The official statement from the Scottish Prison Service retreats behind the familiar mantra of ‘no suspicious circumstances’ (usually a euphemism for suicide), adding that next-of-kin have been informed and that 'fatal accident inquiries may take place in due course'.

May? Unless there has been an unobserved change in the law, they must
take place. In cases of death in custody, there is no discretion. It
is odd that the press office of the Scottish Prison Service seems to
believe there is.

The story surfaced briefly on BBC Scotland's news website yesterday afternoon but by the evening it had gone. The newspapers have little
to add. We shall hear no more of Liam Kerr and Robert Wagstaff until
the obligatory inquiries, and we shall probably hear no more of them
even then. Deaths in custody rarely excite much public curiosity.

I have a personal reason for mentioning these ones.

II
Many years ago, I went to Polmont as a visitor and hanger-on. I was
about 10 years old. My father’s company of strolling players believed
in taking theatre to the people, and one night they took theatre to
the borstal (as it was known in those days). I have long forgotten
which of their repertoire of homespun comedies they inflicted on this
captive audience, but I have never forgotten the unique quality of the
experience as I watched it unfold from the wings.

In the packed recreation hall, the atmosphere was raucous even before the curtain went up. A loud cheer greeted the first appearance of the actors, whose every exchange of dialogue provoked uncontrolled hilarity. Struggling to be heard above the din, they were soon competing with an irreverent commentary on the implausibility of the plot from some wag in the stalls. It was chaos. It was anarchy.

The company, sweat pouring off their faces, battled on until the blessed respite of the interval, when my father gave them a pep talk
and propelled them back on stage for Act II. At the end of the ordeal,
a roar erupted with thunderous stamping of feet. The ovation lasted
several minutes until finally officers cleared the hall and the boys
returned to their cells.

But the most remarkable part of the evening was still to come. Before the exhausted visitors boarded the company bus, they turned back to
have a last look at Polmont borstal and saw hundreds of small faces behind
barred windows waving them goodbye. It is one of the few outstanding
memories of my childhood, and it has never ceased to fill me with pity.

I knew nothing then of what went on in borstals. The institutions were
named after a town in Kent where the Victorians converted part of an
adult prison into an experimental unit for young offenders between the
ages of 16 and 21. In theory at least, it was enlightened penal reform. The children and young people were kept apart from the other prisoners and introduced to an improving regime of physical exercise, school lessons (a minimum of six hours a week of evening classes) and vocational training in such trades as sewing, bricklaying and hedge-trimming.

But it was a harsh regime: excessively so by modern standards. The day
began at 6am with a brisk two-mile run followed by a breakfast of cold
porridge, bread and jam and then a busy day of compulsory chores.
Photographs in the National Archives depict ferocious looking PE
instructors yelling orders at boys in shorts. The strict discipline included the ultimate sanction of the birch, and among the inmates bullying was rife. No doubt it was also the perfect environment for sexual abuse.

In 1988 borstals were deemed to have outlived their usefulness and were replaced by young offenders institutions, many on the same sites. I wouldn’t recognise Polmont if I went back. It has been rebuilt. It is now the largest institution of its kind in Britain, with accommodation for 760 inmates.

III
They don’t birch them any longer. They don’t march them on early morning hikes in the bleak midwinter or expect them them to eat cold porridge or bark insults at them in exercise yards. A new block has been created with every modern facility, the degrading practice of slopping out ceased some years ago, and inmates are addressed by their first names.

Nevertheless the most recent report by HM Inspector of Prisons makes depressing reading. The chief inspector concluded that many of the staff regard Polmont as ‘just another prison’ rather than as a place of special needs. He noted the high turnover of senior management.

He found that too often offenders were ‘still in their beds in the afternoon, having been up late the previous night watching TV in their cells’, that there was a lack of incentive to take part in education or vocational training (‘The regime appears to do little to encourage aspiration’) and that younger offenders were offered even less access to purposeful activity than their older counterparts.

Of the 11 external work placements, only two were being taken up at the time of the inspection; training workshops were often closed; there was no opportunity to obtain the advanced-level vocational qualifications that would equip offenders for a useful life on release; and inmates were locked in their cells for long periods of the day and night.

It is extraordinary that the Scottish Government, with its many claims to running a humane society, should have allowed young offenders to fester in this way. For all that borstal was brutal, there was a kernel of good in it: the insistence on learning and work. Unaccountably that ethic seems to have gone. It may be time to rediscover and nurture it.

Meanwhile, two young men are dead and we don’t know how – or, much more important, why.