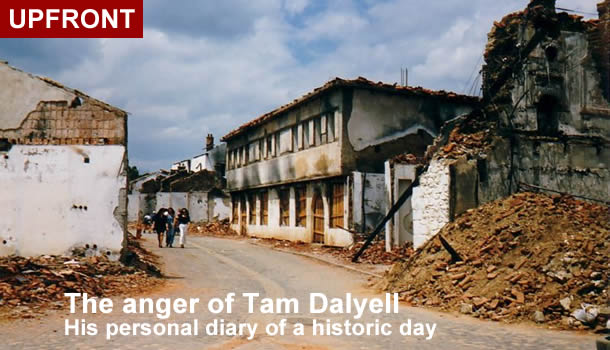 On 6 May 1999, when Scotland elected a parliament, the editor of SR asked a number of well-known Scots to keep a diary of the momentous day. One of the contributors was the Labour parliamentarian Tam Dalyell, who died last week. Today we publish his diary on its own for the first time. It is a short document but an illuminating one in several ways: as a reminder of how the election was overshadowed by the war in the Balkans (Nato had launched air strikes against Yugoslavia and tens of thousands of Kosovo Albanian refugees had been pouring out of Kosovo amid reports of killings and atrocities at the hands of Serb forces); as a testament to Dalyell’s intense anger at his government’s support of the Nato bombing campaign and especially the role of the foreign secretary, Robin Cook; and for its disillusioned commentary on the state of Scottish Labour – then still the dominant political force north of the border.

2.00am
London
If anyone had suggested at any time since the fateful day at Dalintober Street, when the Scottish Labour Party did a U-turn in favour of a Scottish assembly, that my mind would not be on Edinburgh government on election day, I would have been incredulous. But truth to tell, worries about the Balkans have evicted worries about the break-up of Britain. I wake up and ponder over the meeting at which I had been the opening speaker a few hours earlier. An eve-of-poll rally in Scotland? No such thing. The venue was the huge Methodist Hall, opposite Westminster Abbey, where 1,700 people, standing 10 deep in the aisles, listened to passionate speeches for the end of bombing.

Turn on the radio as I slip up to the bathroom, and find the proportional representation of the Scottish Parliament the last item on the hourly World Service news.

6.00am
London
The 6am news does lead with the news that 36 million peole would be voting, but not the London boroughs, on this Super-Thursday, but quickly moves on to the financial toll on the Euro caused by the Balkan war. Today’s papers referred to, including the Herald, calling on people to vote 'with clarity in your head and pride in your heart'. Quickly presses on to consider the sagas of a drunk in charge of a motorised skate-board and a 31-year-old air hostess arriving in Genoa, amazingly on time, who lost a bet with passengers and ran around the cabin in her undies; fortunately, she was only reprimanded by BA.

8.00am
London
Phone Kathleen at 8am, as always. She has heard, as I have, Alan Clarke on Radio 4, about the Kosovo refugees. Kathleen says that we are raising expectations for the refugees that we cannot fulfil, that we have to organise ourselves if we are to take refugees, and that Alan Clarke was right to ask about schooling and a host of other awkward questions.

She raises the question of 'blackmailing', of being put in the wrong if you did not immediately welcome ethnic Albanians, whatever their criminal drugs activity, without screening, and if you did not welcome a Scottish parliament. Kathleen thinks the media has been quite wrong to pressurise by questioning and manipulating people into taking up positions they do not hold. One example was during the [1997] referendum, when the Nos were portrayed as being against having more say in our own affairs. Another example was an interview Kathleen had seen with Jeremy Paxman last night in which he tried to put the Greek minister for Europe in the false position of favouring ethnic cleansing.

Kathleen objects to the posters 'Labour Labour Labour' without the candidate’s name. She thinks it is a deliberate fudge by Donald Dewar to make the electorate forget all the squabbles about selection. She recalls how we sat down with Jimmy Boyle, my formidable first agent, and worked out our own election address. A far cry from the centralised glossy guff coming out of party HQ nowadays.

7.00pm
Canvassing in Linlithgow
One couple I take from Justinhaugh Drive say they will only vote for named candidates, and will not on principle vote for a party list. Another confides that he had voted for Mary Mulligan [Labour candidate] and for Tommy Sheridan’s 'outfit' on the list. 'I’m just Old Labour', he says. 'Yes', I respond, 'I’m Ancient Labour myself'. He chuckles, and says that in 1962, like his friends the Alexander Brothers, he had been very suspicious of me. Strange, he says, it should be you, and not [Robin] Cook, who should be shouting against the bombing. Ruefully, he adds that he had come to like me since I opposed devolution in 1978-79. He still does not think a Scottish parliament is a good idea, but believes everyone has a duty to vote. I never cease to marvel at how some very infirm people display their determination to vote. I suspect it is therapeutic. One still counts.

I decide not to go to the count, partly because I am tired, partly because it is an evening that belongs to other candidates, and candidly because, if I did go, I could not restrain myself from entering a steaming row with Robin Cook, whom I blame, in great measure, along with his odious friend, Madeleine Albright, for the Balkan war. I think sadly of the happier joint counts in 1983, 1987, 1992 and 1997, when Margaret [Cook’s wife] was alongside him. But then if Margaret had still been with him, he would not have become Blair’s prisoner, and she would have had so much to say about bombing and their CND past, that he would have opposed this madness against Belgrave.

10.00pm
Linlithgow
I am hearing the first exit polls from the BBC. If it is true that Labour has failed to get an overall majority, and is dependent on Lib-Dem coalition partners, we are entitled to ask: 'What can such a coalition do for Scotland that a Labour government with a substantial majority cannot do?' Many in the Labour party will ask: why did we sweat our guts out to hold the Labour party together over 18 years, simply to get a coalition? Will activists bother to do the hard work of the party in the future when they see Dewar and the Lib Dems carving up decisions in public? Albeit it is now clear that the extent of their clandestine relationship was far more extensive than we ever
imagined.

Forgive me for feeling bitter that the striving of so many Labour members for a successful Labour government may have been squandered by becoming the prisoner of a minority party, many of whose members are deeply anti-socialist at home, and hawks for military adventures abroad.

The following day, 7 May 1999, Nato bombed the Chinese embassy in Belgrade with the loss of four lives. China accused Nato of carrying out a war crime. Nato insisted it had been an accident. On 10 June, Nato stopped the bombing after Belgrade agreed to a full military withdrawal from Kosovo. In Scotland, Labour failed to achieve an overall majority, as Tam Dalyell had speculated in his last diary entry, and did enter into a coalition with the Liberal Democrats.