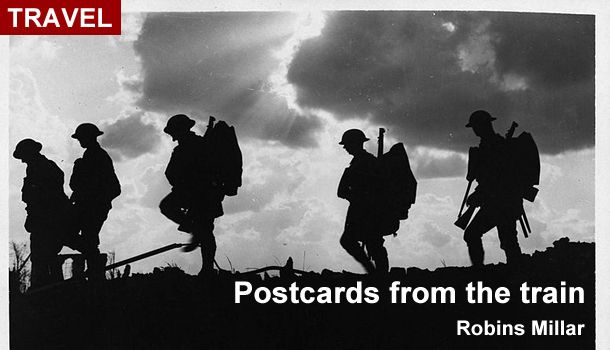 In the first hours of the first world war – August 1914 – a young Scottish journalist was peddling through the last of Scotland on the high road south.

Industry gradually left behind. Climbing road. Wide expanse. Glorious day of sun and breeze. Made poetry. Took 10 at Lesmahagow. Quiet hamlet with nothing doing at all.

Set out for Abington, 14-and-a-half miles. Douglas halfway. Noble lord’s seat somewhere about, imposing gateway, visible to the naked eye, 20 feet high, with expansive triangle before it, presumably for carriages, and interminable carriage drive vanishing through park. Whole district has taken aspect of a public park. Public road like avenue through Kelvingrove but scenery noble and on grander scale than any park I ever saw. Everything clipped and cultivated like private grounds with gardener in attendance. The very hillsides cropped bare and rolling in amiable dignity like lawns; the grass among the woods beside the road short, free from weeds and uncouth vegetation. Trees of every description majestical by the wayside in innumerable battalions.

Past this into wildest moorland, destitute of aught but heather and peat grass, courting couples and sheep. Couples cycled out several miles, left machines lying on road and sat a few yards up on grass in full view of public. Why this prominence? Is this to satisfy respectability? Is this the maiden’s modesty here, her convention of self-protection, that she must not leave the haunts of men to do her courting, even round the corner, until an understanding is affected?

Soon not a house within miles. Rolling hills looming round the long long road. Here and there belts of woodland, here and there a farm. Why so few? Surely cultivation, if possible at odd intervals, is capable of extension. Suspect most of this dreary district could be put to use by careful handling, either in farming or afforestation.

Found Abington rather swanky and ran onto Crawford which is only a degree or so. Pleasant company in lounge to whose converse I listened from depth of armchair without joining in. Four men, two ladies, commonplace people but in good spirits, laughing at mild witticisms. Lounge separated by red curtains from sitting room where party of local bowlers were celebrating match with neighbouring champions. Never realised before the sublimated seriousness which the game is capable of arousing, as reverential a matter as philosophy, theology or golf, especially when elevated to a loftier plane by spiritual stimulant and an emotional atmosphere of beer.

Sunday
Left at 10 o’clock after breakfast. Chat with two territorials travelling south on motorcycles. A beautiful run through wild scenery to Beattock. Very few people. A few tramps with long overcoats (for sleeping out), bearded brown faces and gingerly gait, brown sackcloth bags containing their belongings slung over their shoulders. Local gypsies by the wayside performing moving toilet and talking a strange tongue, one of them a young girl of striking beauty with dark skin and fine black eyes. She was combing out her long thick wavy black hair and the rags she was dressed in failed to disguise her charm. The caravan was a primitive, ancient-looking contrivance, very dirty and dark inside. They had camped beside the turn of a gaily-singing pebbly stream whose music no doubt charmed their slumbers.

A little ragged barefoot boy ran beside me down a hill, holding in his hands a packet of salt and a stick of toffee. I gave him my hand and speeded him on his way a hundred yards and he thanked me through his panting breath as we parted.

Many trains were passing laden with guns, horses and troops who waved khaki-sleeved arms through the windows as they sped by. I am told that over 70 were expected over the next 24 hours. The big guns looked very sinister on the trucks, sometimes veiled with waterproof covering but, for the most part, shamelessly displayed. The horses stared from their waggons pathetically. And as the men did not know where they were going they were in no better case. They threw postcards from the windows as they passed through stations, for people to forward.

I stopped two hours at Lockerbie to lunch at the Bluebell Hotel, then passed on from this empty little town to Ecclefechan where I reverently sought out Carlyle’s burying place. It was a very simple red sandstone block between two white ones, enclosed in railings among the graves of local townspeople and peasant folk. The graveyard is very peaceful, the serene sunlit hills and dignified trees overwatching it. One could muse upon man, his greatness, his work and his worth, fitly here.

Moving towards Gretna I soon had a glimpse over the Solway Firth on my right and a bustling breeze to stir my hair, with a view over Liddesdale to my left, level, fertile and green.

I crossed into England, resting to sketch the burn that makes the boundary and dawdled up the long straight road into Carlisle, refreshing myself from time to time with brambles at the wayside. After tea, I strolled over to a Socialist club where I was hospitably received and watched a game of skittle pool, conversing with a local town councillor in his shirt-sleeves behind the temperance bar. The last thing I saw at night after I had turned out my light was a band of recruits, 80-strong, marching up the street below my window.

Contributed to the Scottish Review by the family of the late Robins Millar.