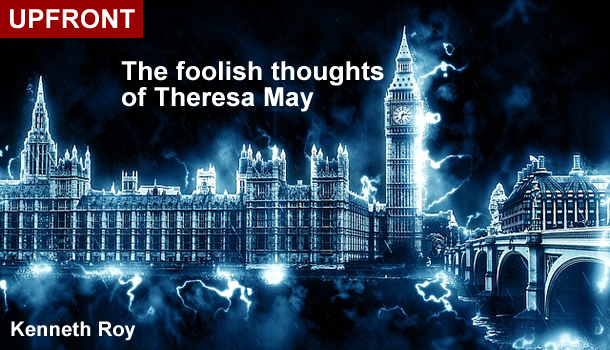 'A man may take to drink because he feels himself to be a failure', wrote Orwell, 'and then fail all the more completely because he drinks. It is rather the same thing that is happening to the English language. It becomes ugly and inaccurate because our thoughts are foolish, but the slovenliness of our language makes it easier for us to have foolish thoughts'.

Orwell believed that, although our bad habits in the use of language were spread by imitation, the process was reversible: that if only we could get rid of these habits we would be able to think more clearly. (He expounded this theory at length in his essay, 'Politics and the English Language'.)

Seventy years later, I have come to tell you that Orwell was wrong. The process has gone too far and we are left with verbal refuse as the stock-in-trade of the political mind.

I am not thinking here of the president of the United States and the dangerous over-simplification that his abuse of social media makes possible. Today’s example is drawn from closer to home. It is the prime minister’s foreword to that empty vessel, 'The United Kingdom’s exit from and new partnership with the European Union' – a title so clumsy, constipated and self-contradictory that it could only have been produced in the early hours of the morning by a committee no longer sure what it thought about anything.

The 'foreword' was not written by Mrs May. We can be fairly confident about that. It would have been dashed off by some sleep-deprived functionary, a person with a first-class honours degree from one of the better universities, and signed by the prime minister as Her Majesty’s printer was clamouring for the finished work. But why do I make excuses for Theresa May? It is her name at the foot of the execrable document. It is her responsibility. Posterity will say, if posterity says anything, that it was all her fault.

I hope I have never begun a sentence with the word 'Because' – because the word 'because' belongs in the middle of a sentence if it belongs anywhere. 'So' has somehow become one of the verbal tics of the age. Scarcely a thought is uttered these days without the need to preface it with a profound 'So' and a reflective intake of breath.

'And' is more admissible if sparingly used. 'And' can be theatrically effective if you know what you are doing with it. The people who drew up the King James version agree with me, even if I prefer to cite Miss Brotherstone as a higher authority. But – she abhorred 'But' too – most people don’t know what they are doing with 'And'. They scatter the word across the page without regard for the physical appearance of a piece of writing, blind to the ability of language to provide visual pleasure. Mrs May’s lazy, ignorant succession of 'Ands' is an affront to the language; no-one who writes this badly can be trusted.

And another thing that’s important.

Of her seven sentences beginning with 'And', this is the worst. It is graceless, it is barely coherent as a grammatical construction and it is unnecessary. If Mrs May had anything important to say, she could simply have said it. If she felt she could not say it without announcing its importance in advance, a second or two’s consideration by any half-educated person would have produced something more elegant. 'And another thing that’s important' is scarcely fit for Britain’s disgusting newspapers, far less a piece of work officially introducing the most far-reaching political change of our lifetime.

Orwell’s essay offered a clue to political language at its most debased. He advised the reader to look out for the verbless sentence, which was almost always a sign of poor thinking. Of Mrs May’s 28 sentences, no fewer than six are verbless. He also asked the reader to be alert to grandiose words devoid of precision or obvious meaning. Mrs May’s foreword is full of them: 'Stronger', 'Fairer'. Stronger and fairer in what way? Stronger and fairer than what, exactly? What does Mrs May see as strong? What is fairness in her book?

Her assumptions are staggering: 'The essential ingredient of our success, the strength and support of 65 million people willing us to make it happen'. Even if we ignore 'the essential ingredient of our success' – which might have been taken from one of the political speeches ridiculed by Orwell in 1946, suitably adapted for the new age of the Great British Bake Off – we are left with the worrying conclusion that Mrs May knows little of her country and nothing of that constituent part of it called Scotland. She is like all here-today-gone-tomorrow political leaders; she spends too much time in official limousines and Whitehall offices, detached from reality.

'...the slovenliness of our language makes it easier for us to have foolish thoughts'. How true of Mrs May. She presumes at the end to speak for the future of 'our children', perhaps unaware that most intelligent young people see a deep value in being part of a union of nations and feel that Mrs May’s vision of a 'Global [Cap G] Britain' is a less than palatable substitute if it means fighter jets for Erdogan and a state visit for Trump.

Nevertheless, there is a perverse utility in this foreword. It enlightens us on what Theresa May believes is good about the state of Britain. She lists our strengths as a nation (what makes us 'great'). They are: our intelligence services (the best), our armed forces (the bravest), our hard and soft power (the most effective). Among these perceived assets, there is no mention of the arts and literature, scientific invention, philosophical discourse, freedom of expression, or altruism in its many practical forms: nothing that speaks to the admirable qualities of a civilised race. In the shallow mind of Theresa May, it is all about power and its exercise.

Mrs May has imagined a country that no longer exists and is taking it on a mad crusade. Perhaps, deep in her heart, she knows it. That may be why she is incapable of finding words to describe and justify the tragic misadventure. Her language says nothing, and yet says it all.