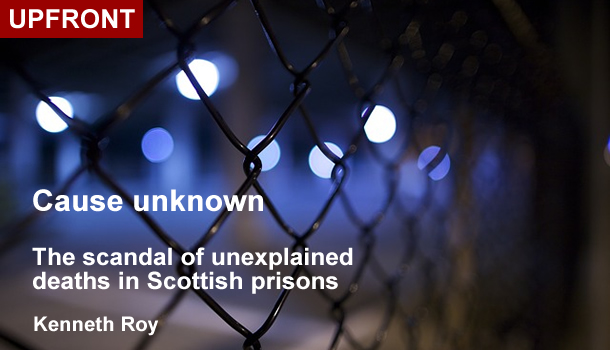 Half of the deaths in Scottish prisons in the last five years are unexplained because of a failure to hold fatal accident inquiries (FAIs), the Scottish Review has discovered. Our study throws into disturbing context the recent statement by the Scottish Prison Service that FAIs 'may' be held into two recent deaths at Polmont young offenders’ institution – despite the fact that inquiries into deaths in custody are obligatory under the law.

In the period from 1 January 2012 to 31 December 2016 (which excludes the Polmont deaths early this year), 121 people – 114 men and seven women – died in Scottish prisons. Despite the mandatory requirement, FAIs have been held in only 61 of these cases.

So far, none of the 28 deaths last year has been the subject of a fatal accident inquiry – but, as our investigation shows, the backlog is considerably longer. Of the 24 deaths in 2015, FAIs into 19 of them are still awaited. The same is true of 10 of the 24 deaths in custody in 2014. Most extraordinary of all, the causes of death in three cases dating back to 2013 remain undetermined.

John Perry, 24, an unconvicted prisoner, died in Perth Prison as long ago as 23 January 2013 only a week after his admission on remand. Four years later, there has been no FAI.

On 28 September 2013, Jason Jackson, 28, a convicted prisoner, died in the same prison seven weeks into his sentence. Still no FAI.

On 29 September 2013, James Barr, 24, died in Addiewell Prison after five weeks on remand. Still no FAI.

The requirements of the Inquiries into Fatal Accidents and Sudden Deaths (Scotland) Act are clear: these deaths must be the subject of inquiries. It is the responsibility of the Crown Office and Procurator Fiscal Service to ensure that this happens. There is no discretion in the matter. But the families of John Perry, Jason Jackson and James Barr go on waiting: month after month, year after year.

SR did a statistical survey of the 121 deaths. Six were teenagers. We found that the average age of the prisoners was 46. Eight of the men who died were in their 70s, two in their 80s. The oldest, Neil Clark, died in Low Moss Prison on 15 July 2014 at the age of 86. We found also, however, that the average age of the prisoners who are known to have committed suicide was considerably lower: 36.

The failure to account for the deaths of women in custody is particularly striking. These are the cases we uncovered:

Dionee Kennedy, 19, died in Cornton Vale Prison on 2 November 2014. No FAI; cause of death unknown.

Linsey Cotton, 33, died in the women’s wing of Saughton Prison, Edinburgh, on 20 March 2016. No FAI; cause of death unknown.

Gwendoline McMullan, 29, died in Cornton Vale Prison on 20 May 2016. No FAI; cause of death unknown.

It is a shocking fact that, of the seven women who died in prison during the period of our investigation, only one – Sarah Mitchell, who died in Cornton Vale Prison on 12 May 2012 at the age of 19 – has ever been the subject of a fatal accident inquiry. The verdict in her case: suicide.

Equally alarming is the absence of any official inquiry into the death of the youngest person to have died in a Scottish prison in the last five years: 17-year-old Raygen Merchant in Polmont young offenders' institution on 17 October 2014. At the time of his death, a newspaper claimed that bullying officers had driven him to suicide. The Daily Record quoted a prison officer who had 'gathered a detailed list of occasions when the lad was supposedly spoken to in a bullying or menacing way. He states that the boy would not have taken his own life if he had been treated differently'. The newspaper added that the officer in question had been transferred to another prison.

There has been no opportunity for these serious allegations to be tested in court. Despite the extreme youth of the prisoner, and the public concern over the circumstances of his death, the Crown Office has shown a complete lack of urgency in exposing the facts of the case to judicial examination. Two years and four months later, there is no outcome – and no closure for his family. Raygen Merchant was a prisoner, but he was also 'a much loved great-grandson, grandson, son, brother, uncle, nephew, cousin, a loving boyfiend and a friend to many' according to his death notice in the Press and Journal.

Why does the Scottish government tolerate such delays in the administration of justice? Does the mandatory requirement for FAIs into deaths in custody count for so little?