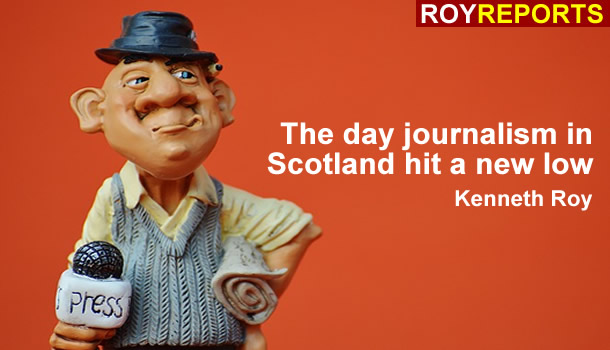 One morning earlier this week, the close-up of a face, splashed across the front page of the Daily Record, was the dominant image on news-stands. The photograph – of a man pinned to the ground – occupied half the page above a two-word headline: GOT HIM.

'Dramatic moment cops restrain man accused of attempting to abduct two young girls in woods,' explained the Record. There was no attempt to pixelate the image: the alleged suspect was clearly visible and identifiable, making him an easy target for the more deranged vigilantes. Yet the story itself failed to live up to its extravagant billing. Indeed it amounted to little more than hearsay.

To illustrate what I mean, I have italicised a couple of key words.

'The girls were playing in a park [in Falkirk] when the 50-year-old man is said to have approached them on his bike and asked them to help him look for his jacket in nearby woods...A neighbour grew suspicious...It's understood the neighbour and his son held the man until police arrived.' So far, there is no proof that the man had actually done anything. But who needs proof? In Scotland's new justice system – trial by press – untested allegation is enough to have your face plastered all over page one.

One of the few facts in the story is that the man is 50. If we discount the unlikely scenario that the vigilant neighbour, a Mr Viper MacDonald, overheard him blurting out his age for the convenience of the press, we must assume that the source of this information was Police Scotland. By contrast, the Daily Record failed to give the ages of the girls. An odd omission. But what followed was odder still.

'Later,' the paper informed its readers, 'the mother of one of the girls shared photos on social media.' Who supplied the photos? Your guess is as good as mine. The mother also shared her views about the 'absolute beastie scum' who had 'tried to get my daughter' and went on to name him. 'The post, which has since been deleted, was shared thousands of times,' reported the Record.

By Monday morning, it was being shared many thousands of times more – courtesy of the Daily Record. A post too extreme even for social media was somehow, 24 hours later, deemed fit to be recycled by a national newspaper, while BBC Scotland, in its usual shameless promotion of the mainstream press, saw nothing ethically dodgy about reproducing a highly prejudicial image – in the sense that it would prejudice any trial – among its daily facsimiles of front pages.

Later in the same edition, one of the Record's regular columnists, Nicola Sturgeon, posed a high-minded question that she is rather fond of asking these days: what sort of society do the Scots want to live in? The implication is always that the air is somehow cleaner north of Berwick. If the first minister studied the front page of her own newspaper, she would instantly have recognised the sort of society that many of us do not want to live in: a society of low journalism, self-righteous hypocrisy, and the lynch mob.

A distinguished figure in the Scottish arts – none more distinguished – writes to ask if I have been invited to an event in Glasgow in late June which is being hosted by the cabinet secretary for culture, Fiona Hyslop. How surprising to be considered, even potentially, as one of the administration's in-crowd – I'm not sure whether to be flattered or insulted.

Helpfully, the distinguished figure encloses a copy of his own invitation to the event, which Ms Hyslop describes as 'a gathering of individuals from across the culture sector/s in Scotland to discuss the development of a national culture strategy for Scotland'. She explains that the meeting (which will be followed by a 'networking reception') will mark the beginning of a 'collaborative journey' in which the national strategy 'is shaped by those immersed in our cultural life and who appreciate the many ways that culture supports, contributes and shapes society, now and into the future'. Ms Hyslop 'looks forward to continuing the conversation' and concludes with her 'kind regards'.

Can any meaning be discerned from this semi-literate drivel in which the word 'contributes' is left grammatically stranded, everyone has to be on the same wretched journey (the toadying having started at the networking reception, no doubt), and the future inevitably follows the present? Perhaps only this: the revealing assumption that culture exists to 'support' society rather than to challenge or subvert it. Perhaps Ms Hyslop was thinking of our own dear Scotland, where the cause of the ruling party is embraced by almost all writers and artists, including more than a few late converts, making their collaborative journey 'now and into the future' a deeply agreeable prospect.

And yet the distinguished figure, perhaps he alone, remains sceptical. 'There is a lot implied in this development which should not simply be hidden behind a closed-door discussion and then "packaged" for media consumption following the dominant political script,' he writes. I'd go a bit further: the first question at the 'gathering' should be why we need a culture strategy or, for that matter, a culture secretary.

Until fairly recently, the arts had always seemed impervious to strategies. 'I saw my job as essentially quite simple,' a former director of the Scottish Arts Council, the late Ronald Mavor, once told me. 'I was just there to hand out the money.' Since devolution it seems to have become more complicated. It is no longer enough that writers write, singers sing, painters paint; they are now to be part of some grand plan by Fiona Hyslop, the recipients of her exclusive invitations, her nibbles and her kind regards.

Am I suspicious? Just a bit.

Ayr High Street on Saturday was symbolism from top to bottom. At the top, a species of humanity not seen in these parts for many a year: the Tories out in numbers, clustering around a large table bedecked in the Union Jack.

'Word has come down,' a canvasser confided in me. 'We are officially a target seat. We can take them out.' She handed me a small card promoting the interests of their man, from which I noted that he was not obviously representing the Scottish Conservative and Unionist party, instead being described as 'Ruth Davidson's candidate'.

'Them' is personified by the sitting SNP member, Corri Wilson, whose small company, prior to her election, provided well-paid secretarial services to the then MSP for the district: an arrangement at the taxpayers' expense that ensured the wrong sort of headlines for both. But I doubt that Ms Wilson will be 'taken out'; the SNP looks fairly safe here, even if its majority is not as unassailable as it is in most West of Scotland seats.

Half-way down the street, a small, wobbly table for two: that former power in the land, the Labour party, reduced to a token presence.

And at the bottom, where the bulldozers have moved in to demolish the derelict lower half of the High Street, the nationalists were literally gathering dust: younger than the others, chatting easily to the few that stopped to listen, courteous and amiable, but somehow exuding less energy than they did in the same street two years ago. The bounce had gone.

A victory for the SNP with a much-reduced majority seems the likely result in Ayr – as it does in Scotland as a whole.