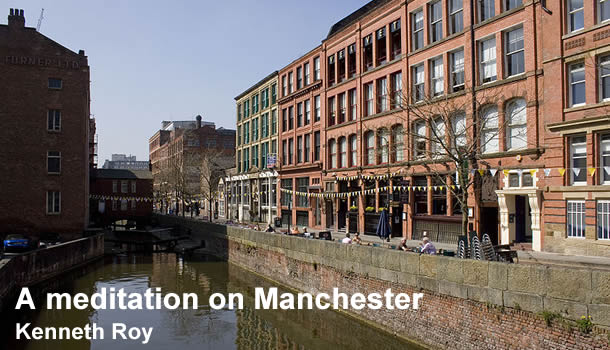 On my only visit to Manchester for professional purposes – it was to write a short portrait of the city for the Observer newspaper – I had only just left Piccadilly station when I spotted a fly-poster advertising a Socialist party meeting in honour of Friedrich Engels. It pleased me that they still remembered Engels, whose experience of working in his father's cotton factory in Manchester had helped to inspire the Communist manifesto, even if the picture in my mind of the imminent celebration was of a small, rather subdued gathering.

The 'shock city' of Victorian England, the 'chimney of the world' as it was known, appalled social commentators, one of whom described it as 'a place where civilised man is turned back almost to a savage'. By the time I got there in the closing years of the 20th century, the chimney of the world had ceased to reek. But it was visibly obvious that an answer had been found to a problem that perplexed Friedrich Engels: the uncertain fate of the city's proletariat, 'who earned nothing and consumed today what they earned yesterday'.

Manchester, with its genius for adaptation, had become a shrine to post-industrialism: a citadel that only came truly alive at night. And the proletariat seemed to be doing all right, carousing into the small hours.

The transformation from a city of sweated labour to one both catering for and employing the pleasure classes would have intrigued Engels, but it should not have astonished him. He might have remembered his encounter with a member of the urban aristocracy of 19th-century Manchester. 'I have never seen so badly built a town in my life,' Engels complained. He meant that it had been allowed to develop unplanned and unregulated. The businessman, after listening patiently to the diatribe, finally replied: 'And yet, there is a great deal of money made here. Good morning.'

It was still possible to make a great deal of money in Manchester. Only the sources of the profit had changed. In the new Manchester, even pastiche made money. People were paying to touch the dartboard of a fictional pub called the Rovers Return, which moonlighted as a tourist attraction when it was not in use as a television set. But in the real streets packed with real people, I struggled to find anything that resembled the Rovers Return and had to remind myself that no rovers, apart from members of the actors' union, had ever returned there.

In 1946, George Orwell wrote in praise of his favourite pub, the Moon under Water. He described its essential qualities: a side-street location and ugly Victorian architecture; regulars who went for conversation as much as for the beer (it was always quiet enough to talk: no muzak then); motherly barmaids; good, cheap food and draught stout; open fires; an absence of drunks and rowdies. It was only at the end of the essay that Orwell revealed what the discerning reader had guessed already: there was no Moon under Water for him, just as, a couple of decades later, there was no Rovers Return for us. He admitted that he knew of nowhere of that name.

But never under-estimate the entrepreneurial spirit of Manchester: walking aimlessly around Deansgate, I not only stumbled on a pub called the Moon under Water; I found that it had only just opened. With its 8,500 square feet of drinking space on three levels, it boasted of being the biggest boozer in Britain. I sat at a long table in the middle of the ground floor and marvelled at this masterpiece of parody, in which the only concession to the nostalgic qualities of the traditional English pub was an effigy of Ena Sharples, a character in 'Coronation Street' who would not have been seen dead in it.

I picked up a copy of the Manchester Evening News and read of the difficulties of the launch a few weeks earlier. A gang of heavies had moved in and offered their services as bouncers, 'refusing to take no for an answer', but the management had stood firm and the threat of trouble appeared to have receded. According to the paper, protection rackets were common in Manchester pubs and clubs. Gangs had even infiltrated the gay village in Canal Street, where cruisers were being stalked by drug barons from Salford when they were not being needlessly persecuted by the police.

An anonymous 'insider' was quoted: 'The police know who they are, everyone knows who they are, but they are almost untouchable.' If criminal gangs were indeed 'almost untouchable', perhaps it was time to inquire more deeply. Yet I could find no evidence that anyone did. The lack of regulation noted by Friedrich Engels as a characteristic of Manchester a century earlier seemed to have taken a new and disturbing form.

In that disconnected way of so much journalism, the same edition of the Evening News carried an uncritical – even approving – feature about the city's 'twilight economy', which had brought 'jobs and a new vibrancy after the scourge of unemployment'. Instead of dark, satanic mills, we now had dark, satanic night clubs, which attracted 60,000 young people to the city centre every weekend. 'Take just 10% of them,' said one club boss, 'multiply by £15 each for an ecstasy tablet, and you're looking at £100,000 a week.' He might have added that you were also looking at 6,000 ecstasy users: the human byproduct of all that vibrancy.

There was something about the vast scale and impersonality of the new leisure economy – the legit as well as the illicit – that both fascinated and repelled. How quintessentially Manchester that, as well as the biggest pub in Britain, it now claimed to have the biggest arena in Europe, both having opened within a few months of each other in 1995. It was tempting to propose the familiar toast to Manchester enterprise. Instead I left with a feeling of unease, articulating it in print. I wondered where the anarchy in the streets might lead.

Friedrich Engels believed passionately that the growth of the city, though brutish and wretched, was a necessary stage in the long unfolding of modern history. On a Monday night in May 2017, another chapter in that history was written by a young man waiting in the foyer for the end of a concert in the biggest arena in Europe. We know what he did, and we know how he did it. One day – after we have exhausted the rhetoric of our anger and grief – we may even be prepared to explore why. We won't be short of clues.