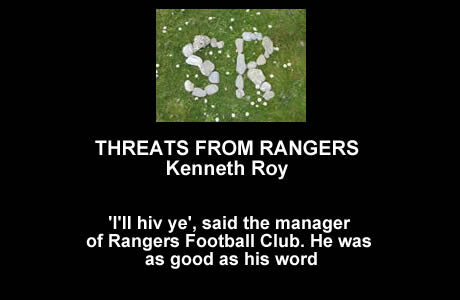 The best journalists these days are not the specialists in politics or public affairs. They are not the hysterical chroniclers of such passing events as celebrity deaths and high tides. They are not critics (some of whom in London are mere cheer leaders for West End theatre managements). The best write about sport. I doubt that sport, rotten in so many respects, deserves people of such talent – including, in Scotland, such stylish practitioners as Graham Spiers, who has just lost his berth in the Herald newspaper in the murkiest circumstances.

Last December, Mr Spiers wrote an article critical of Rangers Football Club: always a hazardous journalistic enterprise. You will not find it all that readily – the paper has expunged it from the web – but it was headed: 'Rangers must uphold progress by resisting return of the old songs'. Mr Spiers praised the club for having 'made considerable strides to eradicate bigotry' and acknowledged that 'dodgy songs' had been 'put on the back burner'. He added, however, that there were still occasional public eruptions of an anti-Catholic anthem and went on to make a specific allegation about a member of the Rangers board.

The American-owned management of the newspaper capitulated to the threats of litigation. A failing title no longer has the services of one of its few remaining stars – Graham Spiers – and it has gone to the ridiculous length of firing a young columnist, Angela Haggerty, whose only crime was to express solidarity with Mr Spiers in a social media message. The silence of other Herald journalists had spoken volumes. Only Ms Haggerty went to the barricades.

As it happens, I am something of a world authority on threats from Rangers Football Club. Fortunately, my employer at the time, the BBC, took a more robust view of them than the spineless Newsquest. So here's my story – for comparative purposes.

Many years ago, I was the jobbing reporter/presenter on a radio programme called 'Crossfire', produced by the prodigal son of Queen Margaret Drive, Donald MacDonald. It was relegated to an early evening backwater between two minority-interest music programmes and the PR department did nothing to promote it. But Donald, in addition to his many other talents, had a penchant for self-promotion. He was sure we would soon be generating our own publicity. And, very soon, we were.

Living up to his promise to deliver outspoken investigative journalism on taboo subjects, he announced that he intended to expose religious discrimination at Rangers Football Club. I groaned inwardly. Rangers' reluctance to sign Catholic players had long been a blot on the Scottish conscience. What more was there to say about it? But Donald was not to be put off. 'I want you to interview Willie Waddell', he declared. 'Impossible', I replied. 'He'll never agree'. Donald explained that I would simply ring the manager – a notoriously dyspeptic character – and record a conversation with him. I would, however, refrain from telling him that we were recording it.

Unethical? Sure. Donald smiled winningly and said something about ends justifying means. Okay, Waddell wouldn't co-operate, but he might let slip some incriminating remark in a conversation that he believed to be off-the-record – particularly if we put through the call after lunch. I went along with the deception and have never lost any sleep over it.

When Waddell came on the line I sat alone – never more alone – in the studio. I explained that I was 'doing some research' and would welcome his thoughts. He was incredibly abusive, and if the call had been broadcast, it would have been highly revealing of the reality behind the public facade. But about five minutes into the tirade, Waddell paused, drew breath, and declared in his belligerent tone: 'Wait a minute. Ye're...ye're...ye're bloody well recording this, aren't ye?' Donald made a gesture signalling that I should tough it out. But my heart was no longer in the subterfuge.
'I'll hiv ye', he ranted. 'I'll give this tae the papers. I'll file an official complaint to yer management. Ye hear me?'

Hear him? Only too clearly.

Willie Waddell was as good as his word. The next morning, the Scottish Daily Express splashed the story all over its front page as the latest BBC scandal – how Roy had recorded a private conversation with the manager of Rangers without his knowledge or authority. The apologies of my own management were accompanied by an undertaking that the tape would be destroyed. I am not sure that it was. When I sought him out, Donald assured me that there was nothing to worry about. Either we were to put our faith in the Lord (in whom he believed) or he knew something I didn't.

The programme went ahead without the Waddell interview and included a memorable confrontation, loosely mediated by myself, between the amiable Jimmy Currie, the club chaplain, and a young left-wing journalist, Brian Wilson. It earned rave notices from Kathleen Rantell in the Glasgow Herald ('on the level of top-rank productions on Radio 4') and Harry Reid in the Scotsman, who described little 'Crossfire' as the flagship of Radio Scotland.

It would be lovely to imagine that these friendly reviews saved my career, but I am not convinced that it was in danger anyway. The BBC's public apologies had a ritualistic quality. No-one reprimanded me; in fact I never heard a word from on-high about the disgraceful episode. Soon afterwards, my contract was renewed and I went on working for the BBC in a succession of increasingly high-profile slots.

The explanation for this leniency? Maybe the BBC had as little time for the policies of Rangers Football Club as the rest of intelligent opinion in Scotland, did the minimum required to make the story go away, and never seriously contemplated firing or disciplining the two mavericks who had incurred the wrath of the Rangers manager and his friends at the Scottish Daily Express. Maybe on this occasion ends did justify means. The only thing I was left to curse was my lack of acting ability.

It seems we live in different times. The two stories are not exactly analogous – as far as I know the club stopped short of threatening the BBC with our learned friends – but they are indicative of a change in attitudes. We kept our jobs and the offending programme was not scrapped: far from it. There was a certain insouciance about this response. Would the BBC be so bold today? I wonder. But I hope it would be more protective of its journalists than the Herald, which regards a simple message of support for a beleaguered colleague as a sacking offence. This tells us all we need to know about a sadly diminished newspaper – and its editor.