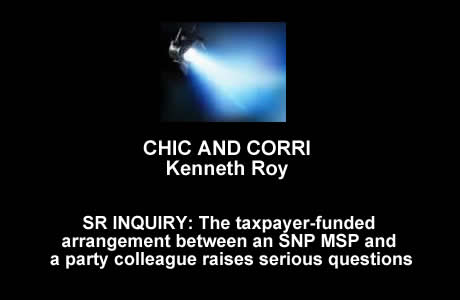 Charles Brodie, who likes to be known as Chic, is an SNP MSP for the South of
Scotland, one of 56 members appointed from the 'List’. Between May 2011, when he took his seat at Holyrood, and April 2016, when he vacates it, he will have received around £300,000 in salary and at least £180,000 in expenses. I say 'at least’ because £180,000 is his cumulative claim to the end of January, with a few months of the current parliament still to run.

The services of Mr Brodie, then, look like costing the taxpayer a figure close to half a million pounds. Yet he has been elected by no-one. He is a beneficiary of a system of proportional representation which permits the parties to appoint any Tom, Dick or Harriet to their slate of candidates without the tiresome necessity of Tom, Dick or Harriet – or, in this case, Chic – having to submit themselves to the electorate for their approval. With our second vote, we are simply invited to put our cross against the party of our choice and leave the party to do the rest.

This much can be said in favour of Mr Brodie. Unlike so many appointed to the Scottish Parliament without a proper democratic mandate, he has repeatedly tried to win the favour of the electorate by the old-fashioned method – and repeatedly failed. Before he was finally allocated a seat by the Scottish National Party, he had fought no fewer than nine elections without success.

He stood for the Liberals as long ago as the general election of October 1974 and again in 1979, 1983 and 1987 and informs us on his website that, In the 1979 election, he opposed Gordon Wilson, the nationalist leader, and 'the infamous Jimmy Reid – then Labour’ in Dundee East. Many people in Scotland – I have a very good reason for counting myself as one of them – do not regard Jimmy Reid as infamous. We regard him fondly as humane, principled and effective.

Mr Brodie, who is neither famous nor infamous, represented the Liberal Democrats in the 1992, 1997 and 2001 general elections before a late conversion to the cause of Scottish nationalism. He was an SNP candidate in the 2010 general election and again, for the Scottish Parliament, in May 2011. Still the ungrateful voters did not think highly enough of Mr Brodie to elect him. He finally made it to one of the parliaments of the UK only because his new party decided to put him there.

His expenses in his first year at Holyrood were unexceptional – £21,200. At that stage, no-one was paying much attention to Mr Brodie. It was a couple of years before the press started to refer to him as Scotland’s most costly MSP. In 2012-13 his expenses rose to £39,500. The following year they rocketed to £54,300. Suddenly, an obscure List MSP was costing the taxpayer more than £1,000 a week in expenses, almost as much as the £1,150 a week he was getting in wages.

When the Daily Record reported this, Mr Brodie reacted angrily. He blamed the parliamentary system of accounting for his unflattering press. While others employed assistants, he preferred to outsource admin work to an external agency. These costs were included in his expenses, while the salaries of staff directly employed by his colleagues were not. After this explanation, the paper took the story no further.

Mr Brodie had a reasonable complaint. A system which proudly accounts for every biscuit, every paper clip, every minor taxi fare, has precious little to reveal about the greater expense of PAs, caseworkers, office managers and the like: who they are, what they do for the public good, and how much they are paid. All this goes unreported under the cover of data protection, exposing the fiction that Holyrood is a model of openness. Mr Brodie was correct to alert us to this fact. But that does not absolve him from public scrutiny of his own arrangements. In a spirit of transparency, which he is the first to champion, SR has had a close look at these arrangements.

Sometime in April 2012, Mr Brodie engaged at the taxpayer’s expense a firm called Caledonii Resources Ltd, based in Wellington Square, Ayr, whose business activity was listed as conference organiser. The initial consultancy fees of £2,100 from Mr Brodie must have been one of the firm’s first transactions, for company records show that Caledonii Resources Ltd was incorporated on 2 April 2012 with two directors, Corraine Wilson, a former civil servant, and John McGuire, a retired purchasing director.

The following month, Corraine Wilson was elected to South Ayrshire Council as an SNP member for Ayr.

In subsequent months, the consultancy morphed into a longer-term contract to provide business support for Mr Brodie. By the end of the 2012-13 financial year, he had paid Caledonii Resources Ltd £15,300 (including the initial consultancy fees). In 2013-14, the firm received £32,900 from Mr Brodie; in 2014-15, a further £32,300. Over a three-year period between April 2012 and March 2015, the outsourcing fees to Caledonii Resources Ltd amounted to £80,500 – 55% of Mr Brodie’s total expenses claim to the Scottish Parliament.

Unusually, the firm established by Corraine Wilson and John McGuire to organise conferences does not appear to have a website promoting its services. Its most recent accounts give no indication of turnover or payroll; and its assets of £5,200 were exceeded by liabilities of £5,700. By last year, as Corraine Wilson was expanding her political ambitions, her company had £36 in the bank.

Ms Wilson – standing as Corri Wilson – overturned a Labour majority and became SNP MP for the Westminster constituency of Ayr, Carrick and Cumnock. Around the same time, Caledonii Resources Ltd received its last recorded fee from Chic Brodie MSP: a payment of £3,300.

Mr Brodie’s payments to Caledonii Resources Ltd were a legitimate expense. But a business arrangement which is legitimate is not necessarily wise. Was it wise of Mr Brodie, an SNP MSP, to enter into an outsourcing contract with a company being run by someone who was an SNP activist, councillor and prospective parliamentary candidate and to expect the taxpayer to pick up the bill for this arrangement? It is a serious question given the party’s dominant position in Scottish politics and across vast swathes of civic life – and raises the more general question of whether contracts awarded by MSPs should be better regulated and monitored.

Ms Wilson, since her election, has spoken in nine debates ('well below average’ according to the parliamentary website, They Work For You). From this low profile there has been a single departure into the limelight: her employment of a member of her family (her son) at the taxpayer’s expense. It is a practice widely condemned.

Meanwhile, Chic Brodie is again on the SNP’s slate for the South of Scotland in the forthcoming Holyrood election.