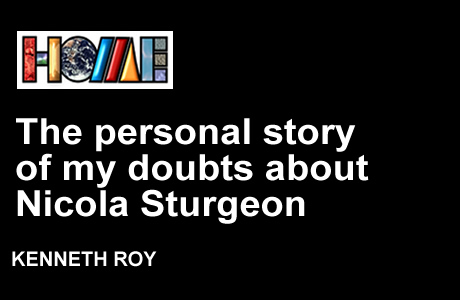 I
The near-idolatry of Nicola Sturgeon reached new heights of reverence last weekend with identical treatment in Scotland on Sunday and the Sunday Herald. Both newspapers chose to publish front-page, full-page photographs of the first minister, a respectful caption overprinted on each image.

Since most of their readers, perhaps all of their readers, would have known in advance approximately what she looked like, we must assume that the editors were making a statement of some kind. Four days ahead of the Holyrood election, they may have been establishing her not only as the poster girl of Scottish politics but as a woman of destiny, the person who will lead us to the promised land, a female Mandela.

Although it is tempting to dismiss Sunday’s picture galleries as an aberration of desperate men, there may be a danger that Ms Sturgeon is starting to believe her own publicity. The cover of that glossy production, the SNP manifesto, is adorned by another mega-pic of the leader. The visual self-promotion has achieved the almost impossible. It has made her predecessor, a somewhat forgotten figure of late, seem fairly modest by comparison.

The personalising of mission statements is nothing new. In the post-war era, we had Dr Billy Graham's 'Tell Scotland’ crusade. He too came to save us – and for a while he had more followers than Nicola Sturgeon. Graham’s rallies at the Kelvin Hall, which drew heavily on the techniques of the American political convention, find a modern equivalent in the SNP’s glitzy gatherings of the faithful, skilfully orchestrated around the centre-stage figure of Nicola Sturgeon and her sincere exhortation to the people of Scotland to convert. There is the same fervour in the auditorium, the same heady promise of a second coming – known these days as a second referendum.

Our infatuation with Billy Graham reminds us that the canny Scots have an occasional tendency to fall at the feet of evangelists. Only the nature of the cause changes. At the moment it feels as if nationalism has a stronger, more durable appeal to popular sentiment than born-again religion. The pews emptied; the fortunes of the nationalist party remain full to overflowing, for the time being at least. There seems no reason on earth, short of what the insurance companies call an Act of God, why Ms Sturgeon should not fulfill her dream of an independent Scotland. The mo is with her. Rupert Murdoch is with her. Her supporters maintain that the tide of history is with her.

Perversely, however, I remain sceptical. The problem for me is the agent of our deliverance to the land of milk, honey and the Named Person: Nicola Sturgeon herself. With the use of a personal experience, the only one I have had of our leader, I will explain why.

II
Six years ago, a Scottish hospice wrote to me with a request for help. The author of the letter, a solicitor, explained that the trustees had attempted to interest the mainstream media in their plight, but to no avail – indicating frankly that the Scottish Review was a last resort. I had never heard of the hospice, but confirmed with the care regulator that it had achieved consistently first-class ratings for the quality of its work.

Although, by then, the story had become a long-running saga, an increasingly painful and fractious one, the essential facts were simple enough. The Scottish Government – an SNP administration then as now – had decided to invest in a residential centre in the west of Scotland for people nearing the end of their lives though not quite at the terminal stage, a facility to be provided by an English-based company called Southern Cross Healthcare. The proposed centre was almost on the doorstep of the hospice. The hospice already provided such care to the highest standard. It was long-established and had earned the respect and affection of the community. Yet, with the opening of the private care facility in the neighbourhood, it faced a reduction in patient numbers, a damaging cut in public funding, even closure.

This was inexplicable. Why would any government – but especially a nationalist government committed to the peculiar interests of Scotland – wish to sacrifice such a humane asset for a commercial outfit of dubious reputation? Southern Cross Healthcare had been the subject of many complaints and several damning reports by regulators, culminating in the arrest of two staff at a care home in West Sussex on suspicion of ill-treatment and neglect of residents. (A coroner ruled that, although 19 deaths at the home were unexplained, the establishment was 'mismanaged and understaffed' and 'rife with institutionalised abuse').

I found it mystifying that an SNP government would want to do business with Southern Cross Healthcare if there was a practical and decent alternative. So I ran a series of pieces in this magazine, imploring the then health secretary, Nicola Sturgeon, to give her wholehearted support to the hospice, restore its funding, and pull out of the impending deal with Southern Cross Healthcare. The mainstream press continued to show little or no interest; and when a colleague offered the latest instalment in the story to the BBC Scotland newsdesk, her gesture was peremptorily rejected.

The pressure we exerted may, however, have helped political supporters of the hospice to secure a debate in the Scottish Parliament. I have an uneasy recollection of the chamber emptying just before the debate began, but a few good people stayed to hear it, including Margo MacDonald, who asked pertinent questions. I cannot remember a word of Nicola Sturgeon's address, which was delivered in a monotone from a civil service brief, but it was clear that nothing had changed. The staff of the hospice in the public gallery, who had travelled to Edinburgh in the hope of progress, left disappointed and more anxious than ever. I felt sorry that the Scottish Review's long campaign had achieved so little. But I wasn't quite done with it.

Digging for dirt, as one does in this job, I decided to take a closer look at the financial history of Southern Cross Healthcare and discovered that the company was deep in debt. It had foolishly over-expanded and, after the crash of 2008, had found itself exposed by a sale and leaseback policy on its properties and an unsustainable rent burden. There was remarkably little press about this dire state of affairs; only the Financial Times reported it. But Scotland's health secretary should have been acutely aware, if not through her own inquiries then by the exercise of diligence on the part of her civil servants, that Southern Cross Healthcare was in potentially terminal crisis. She should have known that, even as her department was negotiating the fine detail of the contract for the new residential care facility, the market value of Southern Cross Healthcare had virtually collapsed and that it was highly unlikely the company would be in any position to honour the agreement.

At this critical point, I did something I had never done before and will never do again: I wrote a letter to a minister. I decided to alert Nicola Sturgeon to the situation as I understood it. She did not extend the courtesy of replying personally. Instead she delegated this task to a civil servant. Still nothing had changed: the letter was nothing more than a re-statement of the Scottish Government's inflexible position. It seemed Ms Sturgeon was set upon her course, impervious to reason or fact.

In the summer of 2011, the creditors pulled the plug on Southern Cross Healthcare, leaving many thousands of elderly and dying people vulnerable and governments on both sides of the border embarrassed by their culpable inattention to the perilous condition of the company. The formerly indifferent media were scandalised; the BBC, which had so recently advised the Scottish Review where to go, mounted a number of belated investigations. My own response was one of bitter laughter and considerable relief. The hospice had been saved – that was the main thing. But not through any efforts of mine; only because Southern Cross Healthcare had conveniently gone bust, just as I'd predicted. (Though no prizes for soothsaying.)

III
Ms Sturgeon paid no price for her folly. None of the media's many bullets were aimed in her direction. It was as if Scotland's health secretary was somehow uninvolved in the debacle rather than one of the guilty parties. I admit to a loss of respect for a minister who had shown such poor judgement, went on backing an obvious loser until the bitter end, and was prepared to see a valuable institution – a hospice caring for the dying – go to the wall.

These events are a long time ago in political terms. Nicola Sturgeon is probably a better minister than she was then. It would be deeply alarming if she were not. But I doubt that she has the political intelligence of her predecessor, who is entitled to be regarded as the creator of the modern nationalist movement, who knew exactly what had to be done to make the SNP electable and knew how to do it.

Whether Ms Sturgeon has what it takes to complete the journey, I am lsss sure. Whenever I think of her, or read the latest hagiography, or gaze in astonishment at one of the adoring full-page photographs, I remember Southern Cross Healthcare – and wonder.

DAVID TORRANCE
Notebook
Cheers for Willie Rennie? Even he was embarrassed

WALTER HUMES
Diary
If the NOTA party was standing, it would get my vote

THEA CLANCY
New Voices
Staring at the ceiling: the reality of adolescent sex

CHRIS HARVIE
The Longer Read
For a vision of the Scottish problem, make your way to Crinan

KATIE GRANT
Favourites
A personal selection of things of value

Next edition of the Scottish Review: 11 May 2016
Sign up free