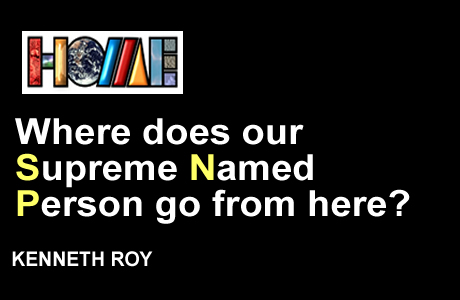 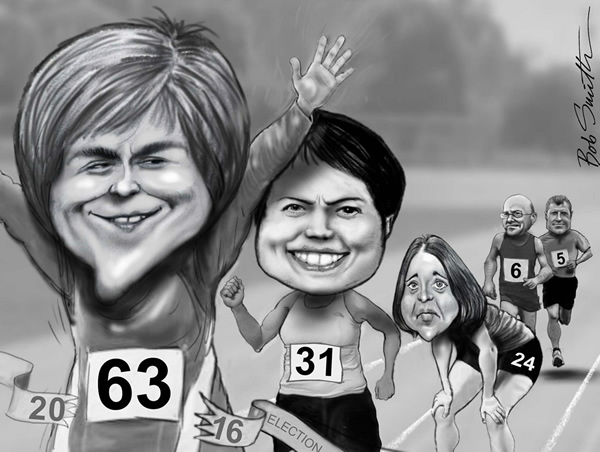 I
It was a slightly weird experience on Saturday morning to confront a set of headlines that few if any had predicted a mere 48 hours before. The combined genius of the Scottish commentariat had failed to anticipate that the Daily Mail, for example, would be able to boast of the ROAR OF MIDDLE SCOTLAND, a reference to the dramatic surge in support for Ruth Davidson’s Conservatives.

The Times’s Scottish edition offered a more measured assessment: HUMBLED STURGEON WAKES UP TO A HARSH NEW REALITY. Even the normally abrasive propaganda sheet, The National, had been subdued by the experience. It spoke of the first minister REACHING OUT and of Nicola Sturgeon’s VOW TO RUN INCLUSIVE GOVERNMENT.

Among these sobering evaluations of the ruling party’s electoral setback, only The Scotsman stood out from the crowd. With its front page splash, it announced that it had been covering a different election with a different result: SNP TO GO IT ALONE AFTER RESOUNDING ELECTION VICTORY.

Even the SNP wasn’t going that far. The most it was prepared to claim for its victory was that it had been 'emphatic’: a carefully judged word in the circumstances. But any spirit of humility and conciliation that may have existed in the fragile dawn of the aftermath expired sometime on Saturday.

By the following morning, the equilibrium in the Murrell household – the one shared by the chief executive of the Scottish National Party and his wife, the first minister – had been restored, and the familiar strident drumbeat was reflected on the front pages: DON’T MESS WITH MY MANDATE (Scotland on Sunday) vied with BRING IT ON, RUTH (Sunday Herald).

II
It is not necessary to buy into The Scotsman’s instant re-writing of political history to produce a relatively positive view of the SNP’s performance in the 2016 election. It remains easily the largest party. It has finished off what was left of Labour in the west of Scotland, a feat that looked implausible even 18 months ago. It has secured five more years in power, albeit as a minority administration.

Emboldened by these facts, Ms Sturgeon now promises – or threatens, depending on one’s point of view – a resumption of her campaign for a second independence referendum. She informs us that she already has the support of what she calls 'almost half the country’ and that she hopes to convert the rest to the merits of her case. The insecurities of Friday have gone. The bandwagon, a little battered by last week's collision with a blue van, will be roadworthy again as soon as the summer.

But hang on. Just as the 'resounding’ victory celebrated by The Scotsman is an illusion, so too is the first minister’s assumption – the starting point for her crusade – that she has 'almost half the country’ on her side. The Supreme Named Person – she who so values basic numeracy that she intends to test children from the age of five – is herself curiously deficient in simple arithmetic.

Here is the simple arithmetic. Even a politician should have been able to work it out for herself.

Scotland has an electorate a few thousand short of 4.1 million. In the 73 constituencies last Thursday, 1,059,897 people voted SNP. It is possible that some were disillusioned Labour supporters who would vote 'No’ in a second referendum. But even if we assume that all 1,059,897 are genuinely dedicated to an independent Scotland, they do not amount to 'almost half the country’. Simple arithmetic tells us that they represent 25.6% of the voting population.

What of the remaining 74.4%? Many did not vote for anyone. Their wishes, if they have any, are unknown. (Though see Gerry Hassan elsewhere in this edition.) Among the others, 1,194,343 voted for three pro-Union parties.

Ms Sturgeon talks of having a mandate and of her refusal to be 'thwarted’ in pursuit of it. On the question of a second referendum – far less on the question of independence – she has no mandate. Like any here-today-gone tomorrow political leader, she governs at all only by the qualified consent of a minority. The simple arithmetic is that, far from having almost half the country on her side for the profound and permanent change she espouses, she has at best only a quarter.

No wonder Ms Sturgeon sounds increasingly frustrated by her class of dimwits. She can test us all she likes. We continue to fail her miserably. But she may go on testing us until we give what she regards as the correct answer. It begins to look that way.

III
The intro of David Clegg’s election report in the Daily Record on Saturday went straight to the heart of the matter: 'Nicola Sturgeon yesterday began her first full term as Scotland’s leader with the impossible task of reuniting a country split more than ever over our constitutional future’. Quite so. Years after the Scottish will was supposedly settled, the notoriously restless natives are no nearer agreement. Indeed, if a second referendum were held tomorrow, the likeliest outcome – 46% Yes, 54% No – would not be markedly different from the result in September 2014. Not a lot has changed.

Except this: the nature of the opposition. In 17 SNP-held seats, the Tories are in second place and in many of them they are now running a close second. The swing against the SNP, particularly in the north-east, was significant; in Alex Salmond’s old fiefdom (Aberdeenshire East) it was a whopping 17%. The Tories are within striking distance of taking nine, maybe 10, of these seats at the next election, which would give Ruth Davidson a block of 40+. But these are just the bare maths. Look more closely at where the Tories are challenging hardest and you will find it's in the very seats that powered the SNP revival under Alex Salmond. Without that wily operator, these heartlands of modern nationalism look as if they're going cool on the project.

At this moment of all moments, when the mood music seems to be changing, Scottish Labour's deputy leader, who managed to lose Cowdenbeath of all places, and lose it badly, stumbled from the wreckage with the stunning idea that his party should convert to the independence cause. This lot appear to be so blind to their own best interests that they are incapable of reading the ruins, never mind the runes. What need of an SNP Mark II when there is already a perfectly serviceable SNP Mark I? What is required in Scotland, if only to make the prospect of the next five years more bearable, is a pro-Union, left-of-centre alternative to the nationalists without the latter's authoritarian and centralising tendencies. That won't be Labour. As in the south, though for different reasons, we probably need a new party. Best, however, not to call it RISE.

IV
If Nicola Sturgeon has no mandate for a second referendum, and if the polls are correct in their finding that most people don't actually want one, why does she propose to go on pushing for it? She would win widespread support across Scotland if she declared in a statesmanlike fashion that consideration of this subject was off the agenda for at least three years and that she intended to devote her energies to the business of government – a government about to be invested with considerable new powers that she was among the first to demand. She could try to make them work, were she so minded. That would be an act of political maturity – fulfilling last weekend's fleeting promise of 'inclusive government'.

Instead, it seems she intends to devote her energies to the business of persuasion. And this is where Mr Clegg of the Daily Record may have got it wrong. It is not that the first minister faces an impossible task in reuniting a divided Scotland. There is a growing sense in which she has no wish to reunite it, even if she knew how. She is interested only in clawing a few percentage points closer to the barest majority for her desired object. This is not government. This is just public relations.