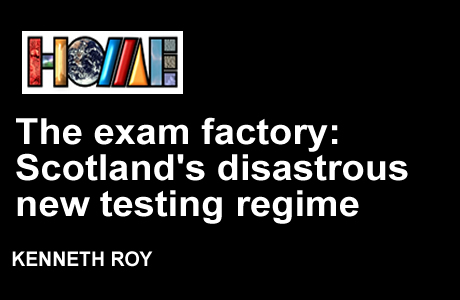 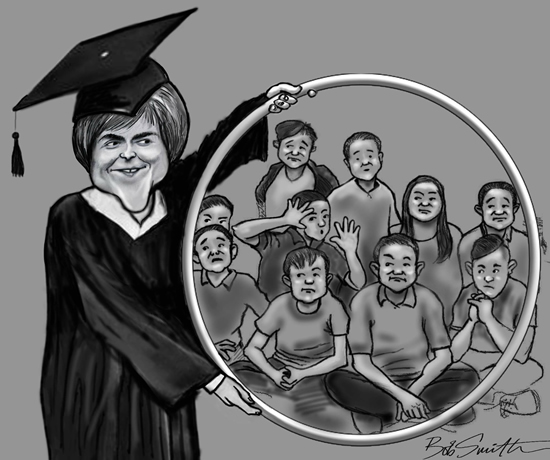 Near the end of his life, the radical teacher and reformer R F Mackenzie came to a sad conclusion about his native country. 'The richest of the resources that Scotland is wasting', he wrote, 'is her young.' Many years of teaching the edgy boys and girls of the industrial heartland had convinced him of their energy, idealism and potential goodwill, but it had also convinced him that schools held them back, 'taking the steam out of them'.

Mackenzie despaired of a system – it was never nobler than a mere system – in which progress was measured by results in examinations and no-one in authority could imagine a world without them. He was describing the bleak world of Scottish education with its emphasis on rules, discipline and conventional views of 'excellence' rather than the world he would have preferred: one in which a spirit of independent inquiry and exploration was actively encouraged.

Rejecting the orthodoxies of both left and right, he seemed to find in Scottish nationalism a source of hope. Which makes me wonder what Mackenzie would have made of the first minister's policy of introducing standardised tests in literacy and numeracy at the age of five – apparently in the hope of closing the so-called 'attainment gap' (still widening according to official figures published this week) between the most deprived children and the most privileged.

Ms Sturgeon is planning an educational 'summit', the word suggestive of some momentous occasion even more loaded with pomposity than usual. Meanwhile it seems she has instructed her new education minister, the luckless John Swinney, to 'fix education' – a brief that has proved beyond the limited ability of all post-war administrations in Scotland, including, notably, her own party's for the last nine years. 'Fix education' indeed: as if it were that simple. But why bother with a 'summit' when the first minister has already made up her mind that the answer lies in testing, testing, and more testing of Scotland's unfortunate children?

If the first minister had passed her own basic test in reading on this subject, she would be aware of the substantial body of evidence that such a policy is profoundly mistaken. She would be aware, for example, of the result of a recent survey of 8,000 teachers in England that the fixation with testing – the 'accountability agenda' now rampant on both sides of the border – is harming children's mental health. Lucie Russell, director of campaigns at Young Minds (a mental health charity), says: 'Both pupils and teachers are under a lot of pressure to achieve results in a pressure cooker exam factory environment. They feel completely defined by their grades and this is detrimental to their well-being'. Individual teachers have reported to their union, the NUT, that the constant treadmill of revision and testing is leading to 'unprecedented levels of anxiety'; one headteacher – again in England – claims that mental ill-health caused by exam stress is 'probably the biggest barrier to academic progress' and that his pupils' lives are being blighted by it.

We have heard rather less from teachers and teachers' organisations in Scotland; the muted response of civic society to any initiative, however wrong-headed, of the present government is one of the stranger features of our national life. But unless children are somehow made differently north of Berwick, it is safe to assume that the same effects are being observed. Ms Sturgeon will only aggravate the problem by exposing five-year-olds to her testing regime: an extreme measure motivated in part by her administration's slightly sinister obsession with gathering personal information about children and young people.

For a happier alternative, it is not necessary to look very far. Finland, a country of comparable population, is routinely held up as a beacon of enlightenment in education and with good cause: it is ahead of every other European country in literacy and third in numeracy. If Ms Sturgeon had truly desired to improve the lot of Scotland's poorest children, she would have studied the experience of our Scandinavian neighbour and learned from it.

In Finland, children are not exposed to tests at the age of five. They are not at school at all. They start kindergarten at the age of six and spend most of their pre-school day at play. 'Children learn so well through play', says the Finnish Board of Education. 'They're so interested in what they're doing that they don't even realise they're learning. It's a very efficient way to teach, and it means that children learn with joy. We teach them how to learn, not how to take a test.' Even when the pupils move from kindergarten into school, there is no testing; it is only towards the end of upper secondary that Finnish children face high-stakes exams.

'The absence of standardised tests means that our teachers can really focus on improving children's learning and understanding', explains a policy adviser to the Finnish government. 'No testing means no league tables for the media to pounce on and no toxic competition, allowing collaboration and co-operation to flourish.'

Learning with joy – the foundation of Finland's educational philosophy – has never been an outstanding feature of Scottish schools. In my extensive digging around for a book on the life of post-war Scotland, I found few champions of joy in the Scottish Education Department; indeed, only one. His name was Sir William McKechnie. He deplored the drab classrooms and the deadening curriculum, the over-concentration on the acquisition of formal qualifications, and developed the idea of 'sunshine schools' offering proper opportunities for creativity. 'Away with the lumber' was McKechnie's battlecry, which must have been music to the ears of R F Mackenzie, but the lumber proved resistant to his revolutionary zeal. Margaret Kidd QC, addressing the 1949 annual conference of the Educational Institute of Scotland, claimed that children were so driven to pass exams that, by the time they went to university, they were worn out.

Remarkably little has changed in 67 years: we are as far away from 'sunshine schools' as ever. Instead it's heads down for Nicola Sturgeon's new test. Of all the poor thinking in this country, the compulsory examination of five-year-olds is surely the most depressing. Joy? That's a foreign country.