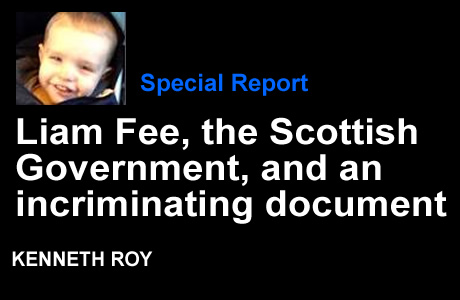 Earlier this week, the first minister warned her opponents not to make political capital out of the death of Liam Fee. She would be entitled to issue such a warning if she and her colleagues had been completely transparent about the politics of this case. Instead we have had 72 hours of fudge and prevarication on two essential questions: did Fife Council have a meaningful Named Person scheme and was Liam Fee part of it?

If the answer to both these questions is 'No' (as the Scottish Government has claimed), the problem for Ms Sturgeon’s administration goes away – except as a public relations disaster. But if the answer is 'Yes' (as we are about to show), serious questions must be asked about the credibility of the Named Person policy and her opponents are entitled to ask them.

So – did Liam have a Named Person or didn’t he? Ms Sturgeon has declined to say one way or the other. Yesterday, her deputy John Swinney made a statement which attempted to clarify the situation. In fairness to Mr Swinney – even if it does him few favours – here is the relevant part of that statement:

Fife Council have indicated that Liam Fee did not have a Named Person in terms of the legislation that parliament has put in place...In Fife there was a contact point for every child, but what is critical about the Named Person is that the Named Person brings with them the ability to require other public authorities and public bodies to work with them to resolve the issues that are at stake.

Now, Mr Swinney can do better than that; and usually does. No-one had suggested that, if Fife Council operated a Named Person scheme during the short life of Liam Fee, it was precisely, clause by clause, identical to the scheme subsequently enshrined in law. But Mr Swinney really should tell us more specifically in what material respects it was different. And he should tell us in language free of the tell-tale wooliness of that deeply unsatisfactory statement of his.

It is often a good idea to check the minutes. Mr Swinney should have checked his. It is possible, however, that he has been so ill-informed by his civil servants that he is unaware of a minute obtained by the Scottish Review. It is the official record of a meeting of the GIRFEC (Getting It Right For Every Child) programme board, which took place in an office in Victoria Quay, Edinburgh, on 10 September 2013, six months before the death of Liam Fee.

The meeting was chaired by one of Mr Swinney’s junior ministerial colleagues, Aileen Campbell, the then minister for children and young people. Martin Crewe, director of Barnardo’s Scotland, is listed as deputy chair.

It is clear from the minute of the meeting that there was a good deal of nervousness around the table about the ruling party’s Named Person policy, then at a fairly advanced stage of preparation. Aileen Campbell, while 're-affirming’ the policy, emphasised the need for 'a strong narrative’ – as well she might considering the far from convincing script. Ralph Roberts, representing the NHS in Scotland, thought the role of the Named Person should be defined ‘more clearly’, while Michelle Miller from SOLACE (Society of Local Authority Chief Executives) noted that there were 'issues in the social work theatre around getting the message across to the public’. (I asked a senior figure in Scottish social work if they had ever heard of a social work theatre. They hadn’t. Maybe it’s an experimental playhouse for trying out ministers’ strong narratives.)

Boyd McAdam, one of the civil servants in attendance, acknowledged 'concerns’ about the Named Person policy, particularly in relation to parental rights, privacy, and information sharing. But it was the contribution of his colleague Alan Small, from the GIRFEC team, that should, in retrospect, interest us most. He reiterated 'the need to move the threshold beyond child protection to take in concerns of child wellbeing, which should trigger effective and proportionate early intervention’.

What did Mr Small mean by 'wellbeing’? What did he mean by 'effective and proportionate’? Whatever he meant – his language was so cloudy that it was capable of almost any interpretation – he seemed to be signalling an important shift in the rights of the state to intervene in children’s lives. If anyone in the room was alarmed about the implications of that shift – say for civil liberties in nationalist Scotland – it doesn’t show in the minute.

Mr Small then singled out for praise the pioneering work of a specific local authority. It is at this point that John Swinney’s statement comes badly unstuck. Here is how the minute records Mr Small for posterity:

Alan [it’s all very matey] offered an example of good practice on information sharing from Fife. Fife already had the Named Person in place and the police had been sharing information since April 2013. 400 cases per month had been raised. Teachers stated that they had not seen any increase in their workload and that there had not been any adverse comments from parents.

Let us disregard the strong possibility that very few parents in Fife actually knew of the existence of the scheme and get straight to the point. This is not the scheme that the Scottish Government has tried to pass off in recent days as some informal pilot. Nor is it the low-key 'contact point for every child’ that the deputy first minister would have us believe. Not a bit of it. This is not 'a' Named Person but 'the' Named Person. In place; in Fife; approved and applauded by the very civil servants responsible for drafting the legislation; and so, we can be sure, remarkably close to the beast that finally emerged on the statute book.

For the avoidance of any remaining doubt, let’s have it one more time from the horse’s mouth:

Fife already had the Named Person in place

Not only did Fife have it in place; why, it was producing '400 cases per month’ as long ago as April 2013. Four hundred a month: think about it. In the small local authority of Fife, in the year before Liam Fee’s death, the council’s Named Persons were generating an annual caseload numbering almost 5,000 – apparently without breaking sweat.

Was Liam Fee part of that impossible caseload? We don’t know – yet. But the official record of a meeting on 10 September 2013 in Victoria Quay, Edinburgh, seems to dispose of any remaining doubt: Liam almost certainly did have a Named Person. It also exposes the shabbiness of the Scottish Government’s attempts to rewrite the history of Fife's Named Person scheme – and the hypocrisy of the first minister’s high moral tone on the subject. If anyone has been politically motivated in the last few days, it is Nicola Sturgeon herself.