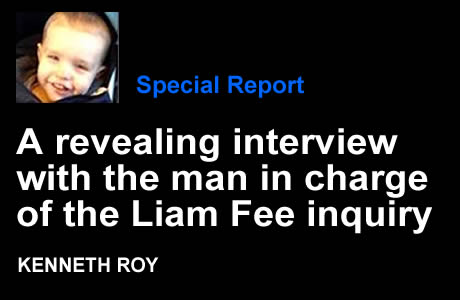 Not long after his appointment, the chair of one of Scotland's child protection committees took part in a live exchange with Kaye Adams, a phone-in presenter on BBC Radio Scotland, about the Scottish Government's Named Person scheme (or 'service' as it is officially called). For reasons that will soon become clear, the content of that brief interview should be more widely known. So here it is:

AS (the caller): I don't think it's helpful that the media – and Radio Scotland are involved in this as well – continue to use the phrase 'state guardian'. I think that gives the wrong impression. In fact, what we're talking about is a teacher or a health visitor. We're not talking about somebody who will intrusively inquire into people's lives. They're there to help and support.

Kaye Adams: But I mean that's what we don't exactly know at this point – as to what extent an individual – call them what you will – will have the power or indeed the inclination to interfere or get involved or pry or inquire into people's lives. I mean, is that controlled?

AS: Yes and no. Well, it is – it all has to be taken into context with the needs of the child. So it's not right and proper...

KA: But who decides the needs of the child?

AS: Well, that will be up to services and the Named Person. However, the legislation is completely covered by...

KA: Where's the parent in that?

AS: ...and the word that should be used is 'proportionality'. The parent will be involved throughout.

AS: I actually don't think there is a definition that's suitable for 'proportionality'. 'Proportionality' is fairly well understood in public service. It's not intrusive, it's not being overly heavy handed and it's working with parents and families and I think that's what I think Named Persons will do.

At first glance – to say nothing of second and third glances – this doesn't sound like someone who is in full possession of the facts. Asked by Kaye Adams if a parent is entitled to hang up the phone on a Named Person, his first inclination is to say no. Then it's yes and no. Then it has to be taken into some unexplained context. It's hardly the most impressive answer ever supplied to Ms Adams. Are chairs of child protection committees not already briefed on such basic matters of protocol?

Next, he suggests that the 'needs of the child' should be decided by 'services and the Named Person'. Orwell, thou shouldst be living at this hour. Ms Adams pounces: whatever happened to parents? Ah, they are to be 'involved throughout' in some unidentified way. 'Involved': it is a word that could mean anything or nothing. But by then the damage has been done: the caller has acknowledged that the real authority has shifted to 'services and the Named Person' and has to be reminded about the existence of parents.

He is then ill-advised enough to introduce the concept of proportionality. This is a concept much beloved of the SNP government in defending its decision to move the threshold for intervention in children's lives beyond protection into 'concerns of wellbeing'. When the Named Person scheme (sorry, service) is introduced in August, a mere 'concern' will be enough to trigger 'effective and proportionate early intervention'.

'Proportionate' and its mate 'proportionality' are in the same unhappy category of imprecision as 'involved'. They are weasel words, evading any forthright statement of an official position or intention. In the cloudy world of the Named Person, one man's proportionality could be another man's justification for removing children.

Ms Adams tries to pin down the caller into a specific definition. The initial response is risible: there is no definition. Thinking better of this, he says that proportionality is 'fairly well understood in public service'. Oh, really? Then, in that new spirit of information sharing which underpins the work of our Named Persons, perhaps he would care to share with the rest of us what is already 'fairly well understood' by our masters? He makes a half-hearted stab at it: the approach will not be 'overly heavy handed'.

Overly. So, let's get this straight. It could be heavy handed. It just won't be overly so. I trust we are reassured.

Sparing the blushes of all concerned, there would have been no need to publish the transcript of this woeful exchange but for one salient fact: the caller on the other end of the telephone was a retired superintendent of police called Alan Small. In 2011, having left the police after 31 years' service, Mr Small somehow found himself 'leading' the Scottish Government's information-sharing team at GIRFEC (Getting It Right for Every Child), the project that has spawned the Named Person scheme.

He left the Scottish Government in January 2015, but not to take up gardening. Only three months later, he was appointed chair of the child protection committee for – of all places – Fife. In that important role he will be directly responsible for the significant case review into the death of Liam Fee.