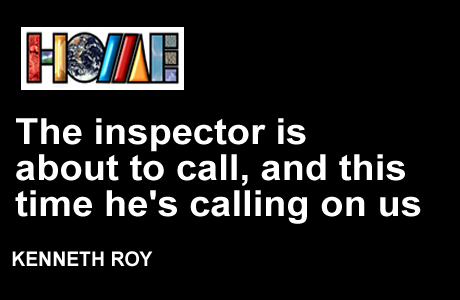 Last Friday I went to the BBC in Glasgow for a new experience, as the subject of
a long and personally probing interview by Isabel Fraser. When I say 'long’, it was half an hour. But if five minutes of airtime is considered fairly generous these days, 30 must be close to eternity.

Near the end, Isabel asked me why I hadn’t retired when I said I would almost two years ago. It is indeed an embarrassment. The farewell tour continues with no final gig in sight. What am I waiting for?

Maybe I’m hanging on for something good to happen in the world; it is a natural human desire to go out on a high. In that case, I might be here until the arrival of the men in the white coats. I’m reminded of a character in a David Hare play who said he didn’t read the newspapers because he didn’t approve of the news any more. The line usually raises a laugh, but more and more it is laughter on the edge. The news is unbearable. The news is killing us.

Here I introduce one of my favourite accessories, that pair of rose-tinted spectacles which I keep for the occasional party turn. ‘My’ decade – when I was young and enjoying myself – was the 60s. Somebody – this being the 60s, no-one could agree who it was – said that if you could remember the 60s, you weren’t there. But I was there, and I remember them well. I remember, for example, the excitement of voting for Harold Wilson. You scoff. But it did feel exciting. I adored Harold Wilson – the 13th Mr Wilson as he was known, for reasons too obscure to explain. For a while, I smoked a pipe in his honour.

I jest not. Young men and women, voting for the first time as I was, did make a difference. They helped to make possible a raft of social reforms, either introduced by the Labour government itself or through private members’ bills for which the Wilson administration made parliamentary time: the abolition of the death penalty (1965), the legalisation of abortion and homosexuality (1967), the relaxation of the law on divorce (1969).

Harold’s pet project was the extension of higher education through the foundation of the Open University (1969), maybe the most enlightened single measure of any post-war government. I like to claim a tiny bit of the credit for that. And I also voted for a revolution in government policy on the arts: the appointment of the first arts minister (Jennie Lee) and a massive investment in new theatres and galleries in provincial Britain.

We had a ball. The last dance came too soon.

Now I remove my rose-tinted specs and return them to the attic where they belong. They might have made their final appearance. For all of a sudden it is the 22nd of June 2016 and the eve of something or other. Whatever it is, it doesn’t smell good. The intervening years have gone in a blur, and Britain feels less joyful, less tolerant, than it has ever felt in my lifetime. How does it feel? It feels mean-spirited.

For the last week, we have been exposed to the statue of Joseph Priestley in the village of Birstall, Yorkshire. In yesterday’s Scottish Review, Chris Harvie told us a little about Joseph Priestley, the man who 'discovered’ oxygen. We could use some. The air is stifling and even when we open a window, we struggle for breath. The weeks of hatred and vituperation have taken it away. They have been breathtaking.

Intrigued by the re-appearance of the Priestleys, I’ve been thinking about another of them: John Boynton Priestley from nearby Bradford, an essayist, novelist, dramatist and socialist; that’s a lot of ists. He was also a grumpy old sod and a womaniser. He too smoked a pipe. He was prolific; he never stopped writing. But he is remembered mostly for a single play, which he wrote towards the end of the second world war but which he set two years before the start of the first. It covers a single evening in the life of a smug, prosperous Midlands family, the Birleys, who are enjoying a celebratory dinner. It is interrupted by an unexpected caller, an inspector of police. A young woman is dead.

It emerges in the course of his interrogation that every member of the Birley family contributed in some way to Eva Smith’s suicide. It’s all a bit schematic; at times it creaks. Yet this standby of tatty rep – with its old-fashioned Christian Socialist values, its whiff of the supernatural, its overhanging presentiment of mass slaughter, its mysterious denouement – somehow moves and provokes modern audiences. It has become one of the classics of our age. Young people love it.

Now, why might that be? It’s a question worth asking at the end of this vicious campaign, as we look with foreboding to a denouement of our own making in the early hours of Friday. I suspect what appeals to young people about this play, what gives it meaning in their own lives, is that it preaches – and it does preach – the importance of moral responsibility.

Read the inspector’s closing speech. I’ve retained the name of the original character, Eva Smith, but it might be interesting if you substituted the name of a young woman from an ethnic minority.

But just remember this. One Eva Smith has gone – but there are millions and millions of Eva Smiths and John Smiths left with us, with their lives, their hopes and their fears, their suffering and a choice of happiness, all intertwined with our lives and what we think and say and do. We don’t live alone. We are members of one body. We are responsible for each other. And I tell you that the time will soon come when, if men will not learn that lesson, then they will be taught it in fire and blood and anguish.

In the end, the early summer of 2016 was never about money, about a balance of economic advantage, about notions of sovereignty, about the parrot cries of 'freedom for Britain’ or 'Britain first’. It was not even about immigration. It was about a shocking want of kindness, an absence of love, a grievous loss of humanity. The inspector is calling. Again he’s calling. This time, he’s calling on us.