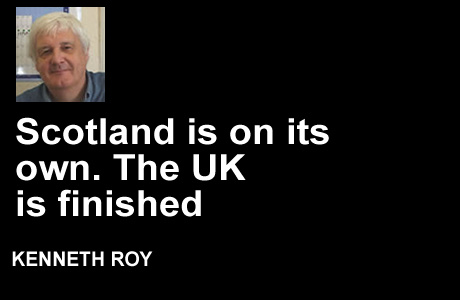 Eleven things it is just about possible to articulate

(1) Remember, you read it here first. As long ago as Tuesday…which already feels like another era altogether. 'Despite everything, England is still listening to Farage...there is reason to fear Friday.' The Friday from Hell, I called it. It's here. The nightmare is now. From our vantage point overlooking the runway, our joy will be complete with the imminent arrival of Trump, gloating over the Leave vote, just as I predicted. It gives me no pleasure (as they say).

(2) Can we just abolish opinion polls? The last of the campaign, a big one concluded a few hours before the polls closed, gave Remain a 10-point lead. They got the independence referendum wrong, they got the general election wrong, and now they've got this one wrong. From Professor John Curtice, the guru of gurus, we are entitled to a period of silence and careful reflection. Unfortunately, we won't get it.

(3) Never believe anyone who tells you that the bookies are always right.

(4) The right-wing press will be rampant. It won't be a pretty sight. I advise those of a sensitive disposition to avoid newsagents' shops for the foreseeable future. Take up Proust. It's the sort of long read that will get you through the grisly summer. For a philosophical view of where we are, try Seneca.

(5) The BBC is culpable for slavishly publishing on its news website, day after day of the campaign except the day of polling itself, facsimiles of the front pages, spewing their anti-EU, anti-migrant filth. It was an influential form of implicit bias.

(6) Dare we feel a little human sympathy for Cameron, who has just fallen on his less than mighty sword? I have been trying. But as the ever sensible J K Rowling said earlier this morning, he will be remembered as the prime minister who destroyed two unions, both unnecessarily. Jeezo, what a legacy.

(7) If we must nurse our wrath – personally I'd prefer not to; the hour has come to spill it all over the shop – let it be nursed for the ghastly Jeremy Corbyn, the weasel who pretends to be leading a once-proud political party and who lifted not a finger to motivate or inspire Labour voters in the north of England – or anywhere else. Presumably Corbyn derived pleasure from watching a drowning man, the hapless Cameron, go down. A pity he's taken the union with him. Corbyn had little credit in the first place. Now he has none. He bears an enormous share of personal responsibility for the disaster. He should do the decent thing. He won't. He will cling on like a limpet until he finishes the Labour Party too. He's going about that important task with his usual ruthless efficiency.

(8) It is hard to suppress bitter laughter at the news that Ruth Davidson is being tipped as 'kingmaker' of the Tory succession. Presumably this would be the same Ruth Davidson who claims to be heading up Scotland's only genuine pro-union party. There is not much traction left in that, so she might as well take the first train south and stay there. I recommend the 9.40 from Glasgow Central. For the sustaining breakfast any kingmaker needs. Or queenmaker: since assassins like Johnson are not always rewarded, I rather fancy Theresa's chances. She would keep the police in their place; we can be sure of that.

(9) When Tom Harris, organiser of Vote Leave Scotland, invites us to rejoice at the prosperous future awaiting us in our gloriously united kingdom, is he aware how idiotic he sounds?

(10) Scotland is on its own. The UK is finished: done with. It will stagger on as a constitutional formality for a few years, but it has lost any meaning, any credibility. We might as well get used to the inevitability of a parting of the ways. We have to find our own place in the world. It feels almost like a duty.

(11) We can't even console ourselves that nobody died. Jo died. Shot by a man shouting: 'Britain first, Britain first'. Well, well, isn't that just the parrot cry of the day? The killer has got his wish. But now it's 'England first, England first' – the tragic, divisive consequence of this Friday from Hell.